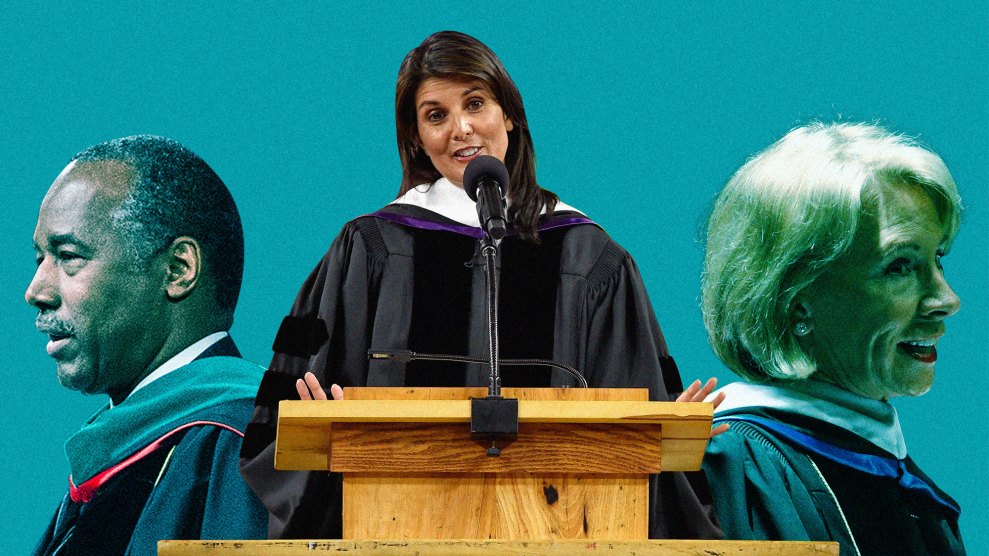 The Class of 2018 crosses the threshold into adulthood at a grim moment in American history. The government stores an alarming number of children in cages. Our one-time allies are now our enemies, and our enemies are now extraterrestrials. Even the Pope is powerless against our dogged desire to destroy the planet. Sure, there’s a record number of job openings, but apparently few have been trained to fill them, and the safety net programs upon which the jobless rely may soon be a distant memory.

While little can be done to escape the existential dread that accompanies the end of all-you-can-eat meal plans and 20 weeks of vacation, the right commencement speaker can send freshly minted baccalaureates off with a dose of optimism. This graduation season, some schools invited the world’s brightest lights to soothe students’ unease: Graduates at the University of Southern California heard from positive-thinker-in-chief Oprah Winfrey, while New York University’s newest alumni indulged in wishful thinking with Canadian Prime Minister Justin Trudeau.

But other grads were treated to some of the chief architects of the world’s woes: current and former members of the Trump administration. Although the majority of millennials might not approve of Trump, the president and his Cabinet members mostly bypassed any potential hecklers by giving commencement speeches at schools that skew conservative. The pearls of, uh, wisdom from Trump officials ranged from heavy-handed assertions of America’s greatness, to bizarre biblical analogies, to foreboding predictions of the end of democracy. Here’s a look at the moments that left us wondering who should be wishing whom “Best of luck with your future endeavors.”

From his military parade ambitions to his Super-Bowl-champion-disinvitation-turned-patriotic-spectacle, few presidents have enjoyed pomp and circumstance as much as Trump, and that enthusiasm was on full display during his address at the Naval Academy’s graduation. Nearly every president since the turn of the 20th century has stood behind the lectern at the military college to describe his vision of American military power, and Trump did that, too—in his own way. “Our country has regained the respect that we used to have long ago abroad,” he declared. “Yes, they are respecting us again. Yes, America is back.”

Precisely what wisdom the president attempted to impart on the nation’s newest military officers remains unclear. He devoted only a handful of the 35 minutes he spoke to the graduates themselves—inevitably, Trump allocated part of the time to bragging about the states he won in the 2016 election—and he spent much of it explaining that he could leave immediately after the ceremony but was choosing to “stay for hours and shake hands” with the more than 1,100 graduates. If there was any takeaway, it may have been this: “Winning is such a great feeling,” he said. “Nothing like winning, you’ve got to win.”

After students at Notre Dame walked out on Trump’s No. 2 last year, Pence visited more friendly confines in 2018, giving the commencement speech at Hillsdale College, a conservative, private school in Michigan. Pence spent his time with the graduates of Hillsdale—a darling among Republicans who tried to spare the school from the “endowment tax” passed as part of last year’s tax bill—outlining an aspirational portrait of the president’s domestic agenda. “What good timing you have,” the vice president said, as he rattled off statistics about the country’s low unemployment and job availability. (Left out of the speech, of course, was the fact that the president campaigned on making it harder for students to obtain the sort of liberal arts degrees that Hillsdale graduates received.)

The deeply religious veep called upon his oft-repeated characterization of himself—“I’m a Christian, a conservative, and a Republican, in that order”—as he pivoted to a long discourse on the growth of religion in America, an assertion not exactly supported by the latest surveys. “Religion in America isn’t receding,” Pence explained. “It’s just the opposite.” Regardless of the reality, Pence made clear where it stands on his list of priorities: “I’ve long believed that nothing is more important to the future of this nation.”

DeVos can often appear robotic in her public appearances, but the devout Christian and education secretary looked more at ease on stage at Ave Maria University, a small Catholic university established by Domino’s Pizza founder Tom Monaghan. DeVos opened her speech with a joke about “sinners and politicians,” noting that the terms “are a bit redundant, aren’t they?” DeVos, who has lately faced criticism over the loosening of federal regulations on religious colleges, took a moment to congratulate Monaghan on his achievement, even though he had apparently been ridiculed by some for creating it, “as many with vision and bold ideas often are.” She went off-script to add, “I sometimes know how he feels.”

DeVos spent most of her speech reflecting on noble subjects, like the lives of saints and the need for public service. But she managed to bring a story about Mother Teresa back to one of her favorite topics: the value of small government. “One of the many pernicious effects of the growth of government is that too many have abdicated responsibility for one another,” she said, proceeding to blame government for “making folks less connected and more insulated from the needs of others.”

The brain surgeon turned interior decorator kept his remarks to graduates at Liberty University, the evangelical educational behemoth founded by Jerry Falwell Jr., brief, but he managed to cover a lot of ground. Among the highlights: We learned that the secretary had the opportunity last summer to “help build some habitat, uh, dwellings” in our nation’s capital—“I got the easy part, putting in insulation.” He also drew an unsettling parallel between his own life and that of the biblical King Solomon. The secretary asked the crowd if they remembered the story in which Solomon tells two women, who both claim to be the mother of a baby, to divide it in two. “Well that’s when I became well known, when I divided babies, too,” he said, a reference to his surgical separation of conjoined twins.

At one point, Carson articulated the decision-making process that brought him to the executive branch. “Many times people ask me, ‘Why would a person with a wonderful career in medicine go into government?’” he said, admitting, “I ask myself that sometimes, too.”

After the former professional wrestling magnate chastised graduates at Connecticut’s Sacred Heart University for their tepid welcome, McMahon admitted she “just couldn’t think of anything new to say” that would “have a real impact.” So instead, she told her own story of bootstrapped success, pausing to reflect upon what led her to Trump’s Cabinet: “If any of the graduates are wondering what your next steps are going to be, this is not a path I recommend.”

McMahon did not once mention her federal post, but she did advise the Class of 2018 to walk into work “every day as though it’s your first day on the job,” something McMahon and her fellow Cabinet secretaries—whose professional histories so seldom overlap with their executive branch responsibilities—probably find relatable. But whatever the flaws in McMahon’s remarks, they ought to be forgiven: She stepped in as a last-minute favor when Tom Brokaw’s commencement appearance had been cancelled in the wake of #MeToo allegations.

Haley, a member of Clemson University’s Class of 1994, began her address to her alma mater’s newest alumni by reflecting fondly on her undergraduate experience. (Among the anecdotes shared, we learned Haley had begun her Clemson career as a textiles management major.) She focused the majority of her remarks on the importance of gratitude but saved her “little bit of unsolicited advice” for the end of the speech which was to “beware of social media.”

The UN ambassador then launched into a long lamentation about the way “everyone presents their most carefully edited lives on Twitter or Instagram” and how “it makes us obsess about the stuff we don’t have rather than be thankful about what we do.” It was a topic perhaps more expected from your life coach than the Cabinet member charged with weighing in on international peacekeeping efforts, but then again, she might have some firsthand professional experience with digital toxicity.

The president has been threatening to fire his deputy AG for months, and that showed in Rosenstein’s remarks to the newest class from Campbell Law School in North Carolina. The speech read like a list of daily affirmations for someone on the brink of losing his job for overseeing an investigation of a sitting president: “The key to living a life of integrity is to take ownership of the consequential decisions,” he said at one point. “Wherever life takes you, conduct your own affairs with integrity, so you will never need to look back with regret,” he added at another. Near the end, he said, “When the rules are unclear, it is best to fall back on your own moral principles.”

Rosenstein’s remarks ran the gamut of cultural influences: He cited the plays of Shakespeare and the poems of Robert Frost alongside lyrics from country musician Lori McKenna and the fictitious adages of Spiderman’s Uncle Ben. But his most alarming reference came from Martin Niemoller, the German theologian who wrote famous words about not speaking up for the Jews in Nazi Germany. “Niemoller failed to defend the rule of law when other people were victimized in the 1930s, and he later regretted it,” Rosenstein explained, adding grimly, “Pursuing truth means always yielding to the facts, even if they run counter to our hopes.”

If Rosenstein’s remarks merely hinted at the struggle for truth and justice, Tillerson’s commencement address to the graduates of the Virginia Military Institute left nothing to the imagination. The former secretary of state, who called Trump a “moron” back in October, was fired over Twitter in mid-March after months of mounting tension between him and his boss. Tillerson’s remarks began as any former secretary of state’s well may—he talked about security threats, the boons and concerns of globalization, and America’s allies.

But after taking a dig at the president’s new tariffs, he pivoted to a diatribe on the “growing crisis in ethics and integrity” he observed in American democracy. Tillerson repeated the Bible verse John 8:32—“Ye shall know the truth, and the truth shall set you free”—as he offered some not-so-veiled warnings about the country’s state of affairs. “If our leaders seek to conceal the truth, or we as people become accepting of alternative realities that are no longer grounded in facts, then we as American citizens are on a pathway to relinquishing our freedom,” he said. And should that happen, Tillerson surmised, “then American democracy as we know it is entering its twilight years.” Gulp.

At the end, Tillerson channels that warning into some advice for the job hunt, something that sounded informed by his own late experience. “Carefully consider the values and the culture of the organizations in which you seek to work,” he said. “Look for employers who set high standards for personal conduct,” which he said, “Sadly…is not always the case.”