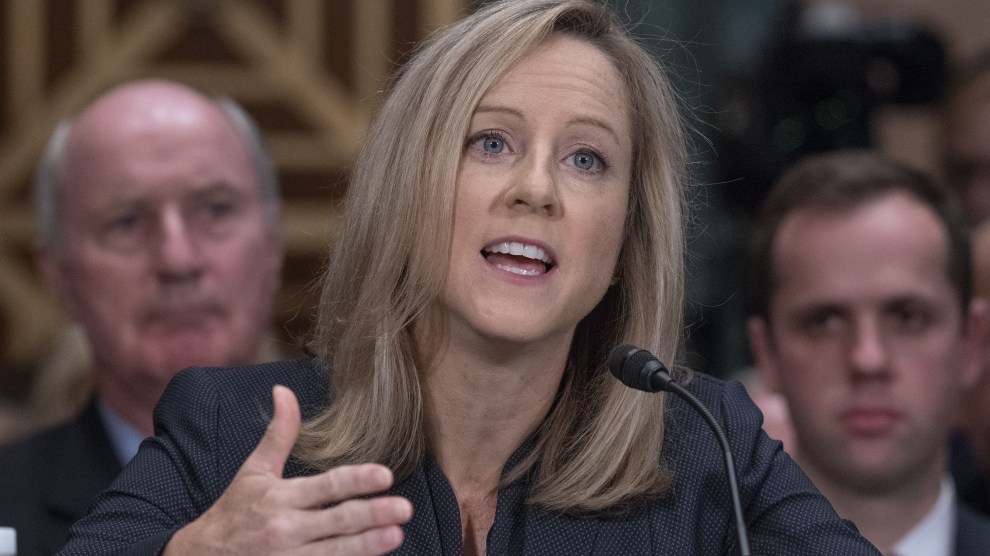 On Thursday, the Senate confirmed Kathy Kraninger, a White House budget official with no consumer finance experience, as the new director of the Consumer Financial Protection Bureau, the watchdog agency created in the wake of the financial crisis to regulate certain financial institutions. Kraninger, who was confirmed on a razor thin, 50-49 vote along party lines, will lead the bureau for the next five years, beyond the end of Trump’s current term.

“Elevating her as the nation’s top watchdog on Wall Street is reckless and will only make our economy more vulnerable to a financial crisis.”

Kraninger’s confirmation will delight the financial industry and policy groups who have long maligned the CFPB as unfriendly to business and championed her as a qualified candidate to lead it, despite her lack of background in consumer finance or banking—the main realms regulated by the bureau. These groups have indicated that they see Kraninger as likely to continue the legacy of Mick Mulvaney, the current White House budget chief who’s also been serving as interim CFPB head, part time.

A long-time CFPB foe who once co-sponsored a House proposal to shut down the bureau, Mulvaney has spent his year at the helm diluting a number of tools aimed at robust supervision of the financial industry. He’s relaxed Obama-era regulations aimed at cracking down on predatory payday lenders, stripped enforcement powers from the office responsible for protecting minority borrowers from discrimination, closed investigations, slashed new enforcement actions, dismissed advisory boards, and even revised the bureau’s mission statement to emphasize deregulation. The result has been some breathing room for the financial industry when it comes to oversight—a reprieve they hope will continue and expand under Kraninger.

Her confirmation has, meanwhile, elicited concern from consumer protection advocates. “Kathy Kraninger has no record of consumer protection or holding big banks, predatory lenders, and other financial scammers accountable,” said Karl Frisch, executive director of the left-leaning Allied Progress, in an emailed statement. Kraninger, he noted, refused to give clear answers about her views on consumer financial issues during her July confirmation hearings. “Rather than reward her with a promotion she does not deserve and is not qualified for, Senators should have refused her nomination. The mission of the CFPB is far too important to be placed in the hands of someone who lacks candor and experience at such a fundamental level.”

“With acting director Mulvaney, we don’t feel like we are the bad guys,” Ed D’Alessio, executive director of Financial Service Centers of America, told the Wall Street Journal last month. D’Alessio also wrote an op-ed in The Hill supporting Kraninger’s nomination, noting that she would be a “a much-needed check on many of the regulations that linger” from the Obama years. “With Acting Director Mulvaney currently spearheading such efforts, there is no better pick than Kraninger to bring them across the finish line and continue to advocate for businesses and consumers.”

“Kathy Kraninger’s inexperience and endorsement of Mulvaney’s destructive policies are gifts to bad financial actors who are hell-bent on using their predatory business model to rip off vulnerable consumers, especially consumers of color,” said Yana Miles, senior legislative counsel for the Center for Responsible Lending, in an emailed statement. “Elevating her as the nation’s top watchdog on Wall Street is reckless and will only make our economy more vulnerable to a financial crisis like we faced 10 years ago.”

“That’s a moral stain that will follow you for the rest of your life.”

Both agencies were involved in implementing administration policies that took more than 2,600 children away from their parents following their arrival at the US border without documents. This background has led Democrats to question the depth of Kraninger’s involvement in the now-defunct family separation policy, both through records requests from Sens. Elizabeth Warren (D-Mass.) and Sherrod Brown (D-Ohio), and later in pointed questioning during Kraninger’s July confirmation hearing before the Senate Banking Committee. Kraninger and OMB have repeatedly given evasive answers to this question, but former federal employees familiar with OMB and White House operations say it is quite likely she played a significant role in implementing the family separations policy.

At the July hearing, a visibly frustrated Sen. Warren rebuked Kraninger for refusing to clarify her role in border separations.

“These are innocent children who might be scarred forever because of this policy. It’s fundamentally immoral—and you, you, were a part of it, Ms. Kraninger,” Sen. Warren said. “That’s a moral stain that will follow you for the rest of your life.”

The White House, financial industry groups, and a number of Republicans have touted Kraninger’s management experience in government as an important qualification to head the CFPB. But faced with questions about the ins and outs of the CFPB’s operation and her plans for it during her confirmation hearing, Kraninger offered vague answers or simplistic solutions that Democrats said revealed deficiencies in the knowledge necessary to lead the bureau.

Makada Henry-Nickie, a governance studies fellow at the Brookings Institution and former senior CFPB analyst, argues that the unresolved question of Kraninger’s role in family separations is relevant to Kraninger’s future work at the bureau. “We know little about just how instrumental she’s been in trafficking in the vulnerabilities of families,” Henry-Nickie says. “She would be leading an agency whose core mission should be to protect some of the most vulnerable consumers—people who oftentimes will match the profile of the folks that she’s been tasked with carrying out these awful separations against.”

Kraninger will have a steep learning curve as she enters this new job, just as Congress’s incoming Democratic majority plans to ramp up CFPB oversight. Rep. Maxine Waters (D-Calif.), the likely new chairwoman of the House Financial Services Committee, has promised to prioritize protecting the CFPB and to investigate the damage done so far by Mulvaney to the bureau’s regulatory power and resources.

Given Kraninger’s lack of experience, many experts are concerned that she will defer to the political appointees handpicked by Mulvaney to serve in senior positions at the bureau. “Is she going to come to her own conclusions or just follow the lead that Mulvaney has charted and defer to the people he’s brought in, who have a lot more financial services background than she does but have been taking the agency in a concerning path?” says Lauren Saunders, associate director at the National Consumer Law Center.

During the Obama administration, the only political appointee at the bureau was director Richard Cordray, in an effort to depoliticize the CFPB’s work. Yet Mulvaney has brought in more than a dozen appointees, many of whom have ties to or formerly worked for House Financial Services Committee chairman Rep. Jeb Hensarling—an ardent critic of the CFPB—or who have defended banks against lawsuits from the CFPB.

The bureau has promised to announce proposed changes to payday lending rules in January.

A number of these appointees have taken on critical roles helping Mulvaney redirect the bureau towards deregulation. Former Hensarling staffer Brian Johnson, for instance, now serves as a senior adviser to Mulvaney and helps set CFPB policy. He also had a hand in crafting the decision, widely criticized by consumer advocates, to overhaul the Obama administration’s restrictions on payday lenders—companies which give out loans with interest rates as high as 400 percent, and disproportionately target low-income borrowers.

The rule was developed after more than five years of research and a review of more than one million comments from consumers and payday lenders alike. But Mulvaney’s CFPB announced plans to “reconsider” and water down key portions soon after he took the helm, while consumer advocates argued that Mulvaney’s longtime cozy relationship with the payday loan industry should preclude him from loosening rules on it. While serving as a congressman, Mulvaney took more than $60,000 in campaign donations from payday lenders; last winter, his CFPB quietly closed a four-year investigation into one of those lenders.

Under Mulvaney’s command, the bureau has promised to announce their proposed changes to the payday lending rule this January, providing an early indication as to whether Kraninger is, as expected, following in Mulvaney’s footsteps.

“If under her watch they propose to gut this very important and modest rule that was enacted after years of study, research, and powerful evidence,” says Saunders, “that will be a strong signal of her priorities, and an anti-consumer direction for the bureau.”

In Kraninger’s own words, that direction is pretty likely. When asked by senators in July for her thoughts on Mulvaney’s actions at the bureau, she responded that: “I cannot identify any actions that Acting Director Mulvaney has taken with which I disagree.”