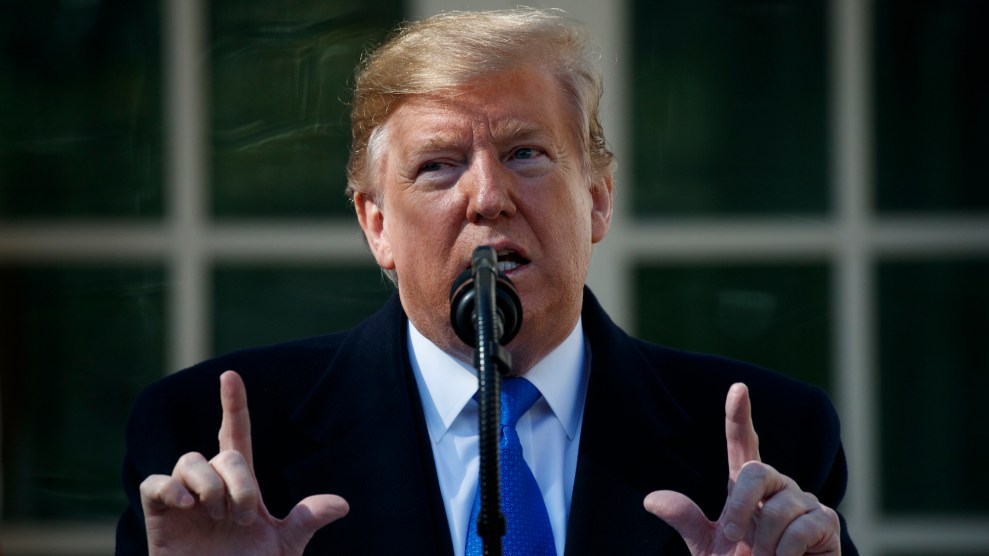 President Donald Trump’s declaration of a national emergency at the southern border to unlock the border wall funding that Congress has refused to provide is already facing a court challenge. But even though Trump has already undermined his justification for declaring an emergency, it’s far from clear that the Supreme Court would rule against him.

To explain what is likely to happen to the emergency declaration in court, Mother Jones spoke with Eric Columbus, who served in the Obama administration as the senior counsel to the deputy attorney general and a special counsel at the Department of Homeland Security.

Mother Jones: You’ve pointed out on Twitter that an emergency declaration doesn’t let the president do anything he wants. What does it allow a president to do?

Eric Columbus: Under the National Emergencies Act, the president can declare an emergency when he deems fit. The statute does not define the term “emergency,” and just declaring an emergency does not, by itself, do anything. All it does is unlock certain powers. In essence, it’s like you’ve got a glass box that says, “Use only in case of emergency.” And when the president declares an emergency, all those boxes open up.

MJ: What are the emergency powers that Trump is invoking?

EC: The main statute that he invoked was 10 USC 2808. That is titled “Construction authority in the event of a declaration of war or national emergency.” It says that if the president declares a national emergency that requires the use of the armed forces, the secretary of defense can authorize military construction projects to the extent necessary to support such use of the armed forces.

MJ: What is the significance of the way Trump is using emergency powers to circumvent Congress?

EC: Other presidents have invoked emergency powers when they could have gone to Congress, but it was simply easier and quicker to act on their own. They usually were in cases where there were not great controversies over the use of emergency powers. Here, we are in a situation where Congress has resisted giving the president all the money he seeks, and yet he’s trying to do an end run around Congress.

MJ: This is going to be challenged in court. How likely is it to be blocked by a lower court?

EC: I would say it’s more likely than not that some court will be able to throw a wrench in it, at least in the beginning, in part because there are serious issues here. It is likely that one or more plaintiffs will be able to find a friendly judge.

MJ: What is likely to be the strongest argument against Trump?

EC: The strongest argument is likely going to be that these military construction projects are not necessary to support the use of the armed forced in conjunction with this emergency.

EC: We have a Supreme Court that is sympathetic to executive power, especially where there is statutory text to point to. In the back of their minds, they may or may not be sympathetic to Trump on the underlying merits. But it’s quite possible that they may not be eager to question presidential determinations. On the flip side, you could see some justices being kind of turned off by the way Trump has played this out over the past couple of years. That might color how they interpret Section 2808.

MJ: A colleague jokingly asked me if the emergency declaration would mean martial law. Others have called this a constitutional crisis. How concerned should people be?

EC: As others have noted, this, in some sense, reflects his weakness rather than his strength. He had the wind at his back for certainly the first two years and couldn’t convince a Republican Congress to give him what he wanted. So he’s taking a different path, and it will go through very normal processes in court. And he will either win or he will lose. This is a president trying to stretch the outer limits of his power. I don’t think it’s in any way tantamount to martial law. He’s needing to try to stretch the limits of his power because he has proven himself to be inept at using the traditional levers of powers.

MJ: In January, you explained what might have been going through Trump’s mind as he considered declaring a national emergency during the government shutdown. How has that analysis held up?

EC: Well, it took him a long time to get there. What I speculated at the time was that he would declare an emergency to reopen the government—in essence, declare victory, and if courts later struck down his efforts, then he would have a handy scapegoat and would be able to say to his base, “Look, I left everything out on the field, and you need to elect me again so I can appoint more Supreme Court justices who will vote better than these guys.”

I think that’s still possible. He did seem almost eager today to talk up the possibility of losing in court. I think he would prefer to win, but he probably feels that losing in the courts is a close second.