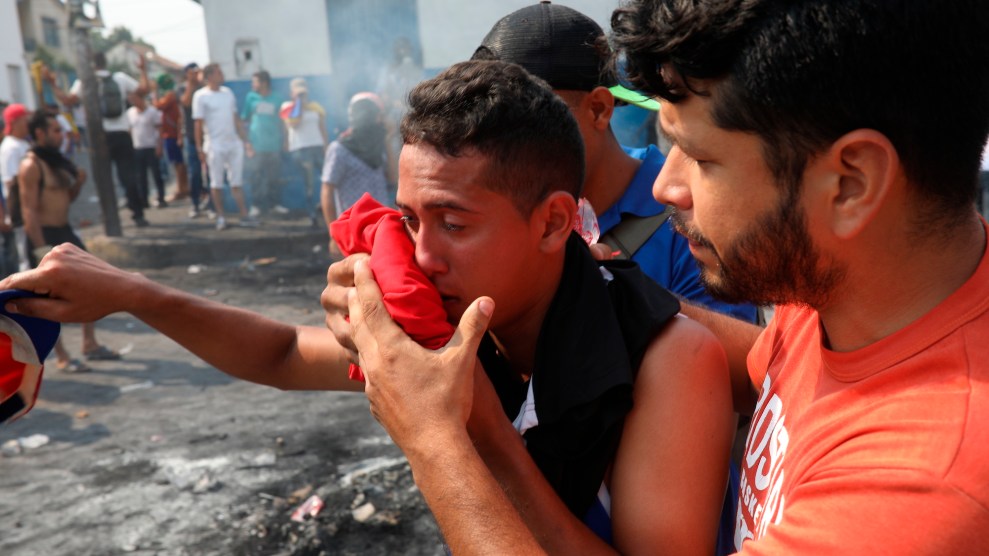 Demonstrators tend to a fellow protester who was overcome by teargas during clashes near the Venezuela-Colombia border on Saturday, Feb. 23, 2019. Rodrigo Abd/AP

Tensions along Venezuela’s borders escalated on Saturday when Venezuelan military officials clashed with protestors and aid workers attempting to bring humanitarian relief into the country. The Washington Post reports that violence at Venezuela’s border with Brazil left four dead and 24 injured after pro-government militia opened fire. This follows a similar clash on Friday that left two dead and 17 injured near another region of the Brazilian border, when violence broke out between the Venezuelan military and a local indigenous community that had tried to bring in aid.

At the country’s border with Colombia, a long-anticipated skirmish erupted when Venezuelan workers demanded to cross into Colombia for work. The Venezuelan National Guard unleashed tear gas on the protesters, who responded by throwing rocks at the military, according to reports from CNN.

Elsewhere along the Colombian border, three Venezuela National Guard troops defected, abandoning their posts to stand in solidarity with the protesters, who have spent the last several weeks voicing opposition to the reelection of President Nicolas Maduro.

The violence follows questions of legitimacy surrounding President Nicolás Maduro’s recent election that gave him a second term in office. Protests against Maduro began after four years of economic collapse when Juan Guaidó, a previously little-known politician  reenergized the Venezuelan opposition by challenging Maduro’s rule as unconstitutional. The United States and other countries have supported Guaidó, but Maduro has refused to step down, forbidding aid to enter the country.

Recent protests have often turned violent, and an ever-deepening humanitarian crisis—including devastating shortages of food and medicine—has ensued.  Humanitarian workers, including those sent from the United States, have been trying to bring aid into the country, but the Venezuelan military has forcibly pushed back against those efforts. Maduro insists that there is no humanitarian crisis, and the protests are an attempt by the United States to conduct a coup.

The White House, which has been trying to send aid into Venezuela, has condemned Maduro’s use of force against its own civilians. President Trump tweeted in solidarity with the Venezuelan protesters on Saturday afternoon, sharing a video of a speech he delivered to an anti-Maduro crowd in Miami earlier this month.

The people of Venezuela stand at the threshold of history, ready to reclaim their country – and their future…. pic.twitter.com/ajxd1EN64c

The edited clip not only highlighted the moments from the speech when Trump condemned Maduro, but also when he criticized Venezuela’s socialist government, which he holds responsible for the political violence there. “Socialism promises a better future, but it always returns to the darkest chapters of the past,” he said. In recent days, President Trump’s reelection campaign has leaned on the political violence in Venezuela to energize his base, citing it as an example of what would happen to America if voters chose a “socialist” like Sen. Bernie Sanders (I-Vt.), who entered the presidential race this week, to lead the country.