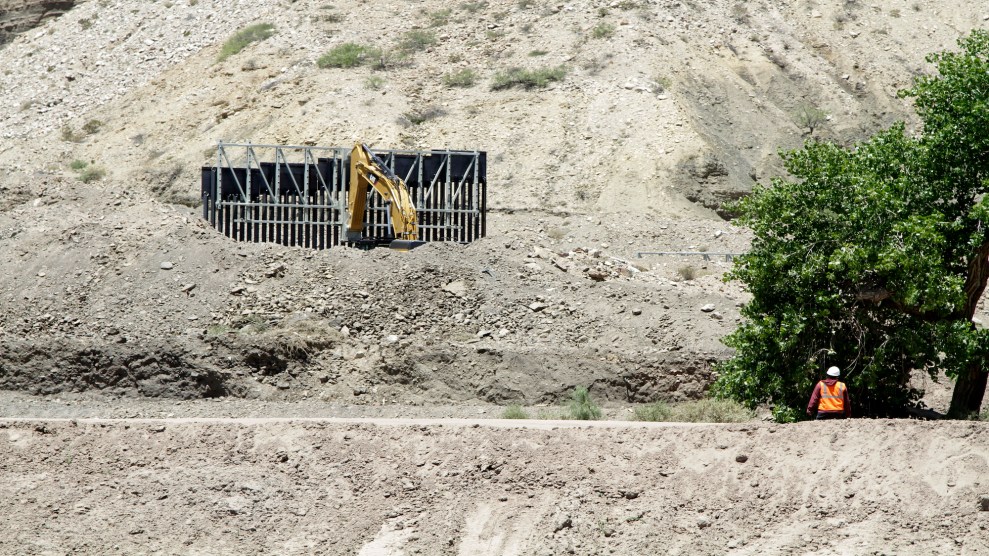 A construction worker watches as a section of a privately funded border fence is moved in Sunland Park, New Mexico.Cedar Attanasio/AP

A monthslong effort to build a crowdfunded private border wall hit a new stumbling block Tuesday when the city of Sunland Park, New Mexico, sent a cease-and-desist order claiming builders did not have the necessary permits for the barrier.

At a press conference Tuesday, Sunland Park Mayor Javier Perea refuted Kolfage’s claim and said the owners of the property had failed to submit a survey or site plan for the wall, adding that “city ordinance only allows a wall up to six feet tall and this far exceeds that.”

Kolfage started the We the People Will Build the Wall crowdfunding campaign in December after President Donald Trump failed to secure $5 billion in border wall funding he had demanded from Congress. Kolfage’s stated goal was to raise $1 billion in order to fund a private wall along the US-Mexico border.

When the effort fell more than $975 million short of its fundraising goal, Kolfage organized a nonprofit called “We Build the Wall, Inc.” to build parts of the wall on its own. The group says it has completed a half-mile section of wall and Kolfage claimed it was already deterring migrants from crossing the border.

Our wall is already working to deter illegals! A group came down to cross and saw the wall, immediately turned around and went back up mountain! Look closely at pic!@Rambobiggs @RyanAFournier @DonaldJTrumpJr @DRUDGE @FoxNews @GOPLeader @MarkDice @JudgeJeanine @TrumpStudents pic.twitter.com/n19iV6lchE

Kolfage, whose history of peddling fake news led Facebook to ban him from the platform, went on the attack Tuesday afternoon. He called Sunland Park officials corrupt and claimed the holdup was orchestrated by Mexican cartels. Mother Jones has yet to determine whether cartel kingpin El Chapo infiltrated the city zoning board himself or left that task to a subordinate.