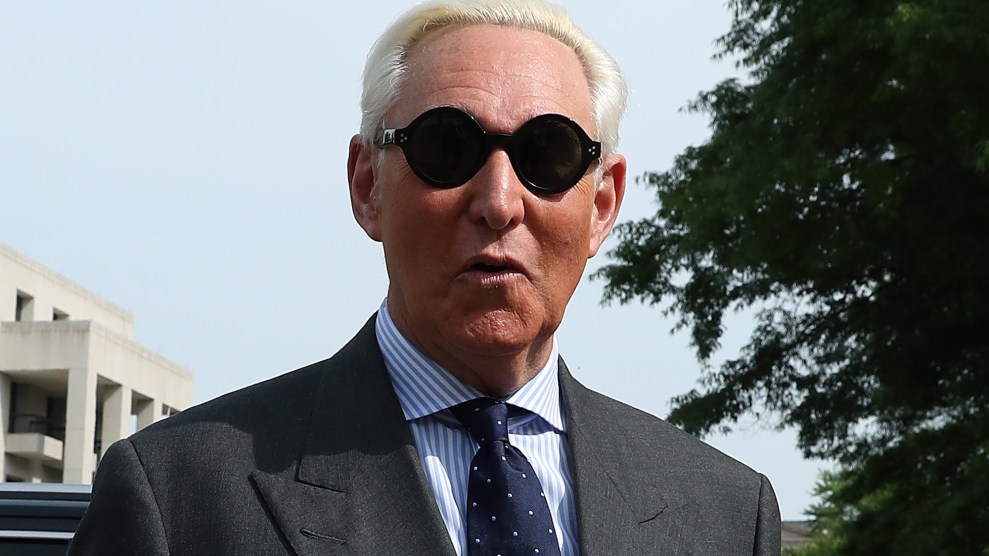 On Thursday, lawyers for Roger Stone, whose travel is restricted ahead of his November trial on obstruction of justice and perjury charges, requested a judge’s permission to visit Tennessee and Illinois “for business opportunities.”

One of those opportunities is at the Pony, an adult entertainment club in Memphis, where Stone is scheduled to appear June 5-7. A longtime political adviser to President Donald Trump, Stone “is coming out to judge the national exotic dancer competition that we’re hosting,” the club’s owner, Jerry Westlund, tells Mother Jones. The appearance is on brand for Stone, who touts himself as a libertine—he once took a New Yorker reporter to a swinger’s club that he said he frequented. “He’s been very open about his appreciation for beautiful women,” Westlund says. (Stone’s lawyer did not respond to questions about the purpose of the Illinois visit.)

In a Facebook post, the club said Stone will judge dancers alongside Kristin Davis, who is known as the “Manhattan Madam” for her role running a high-end prostitution ring in New York City in the early 2000s. Stone has previously employed Davis, and they are close friends. They shared a New York City apartment for a time, and he is her son’s godfather. He also advised Davis’ 2010 bid for New York governor on a libertarian platform.

Stone has complained publicly about his mounting legal expenses and his loss of income due to his prosecution. He has hustled to drum up support for a legal defense fund, selling T-shirts and rocks with his signature on them. Last week, he launched a “Family Support Fund” to seek donations to cover “rent, food, medical expenses, insurance, gasoline, and the most basic of living expenses” for him and his wife. Strip-club appearance fees may be an emerging source of income for the cash-strapped dirty trickster. He gave a lecture earlier this month at an adult club in Richmond, Virginia.

Westlund says a contract bars him from revealing what he is paying Stone. But he jokingly says he will be paying Stone an “educational stipend.” Westlund hopes the controversial political operative will create publicity: “In spite of their prowess, our dancers don’t necessarily get the media attention that they deserve.”

Stormy Daniels, the adult film star who says she had a tryst with Trump in 2007, appeared at Westlund’s club last year. “She was a big success and a big hit,” he says. “Who better to follow up than Roger Stone?” Stone’s visit reflects no particular political agenda, Westlund says. But he notes, “I’m a proud supporter of the First Amendment.”

Correction: This article has been updated to note that Judge Amy Berman Jackson has not yet ruled on Stone’s travel request.