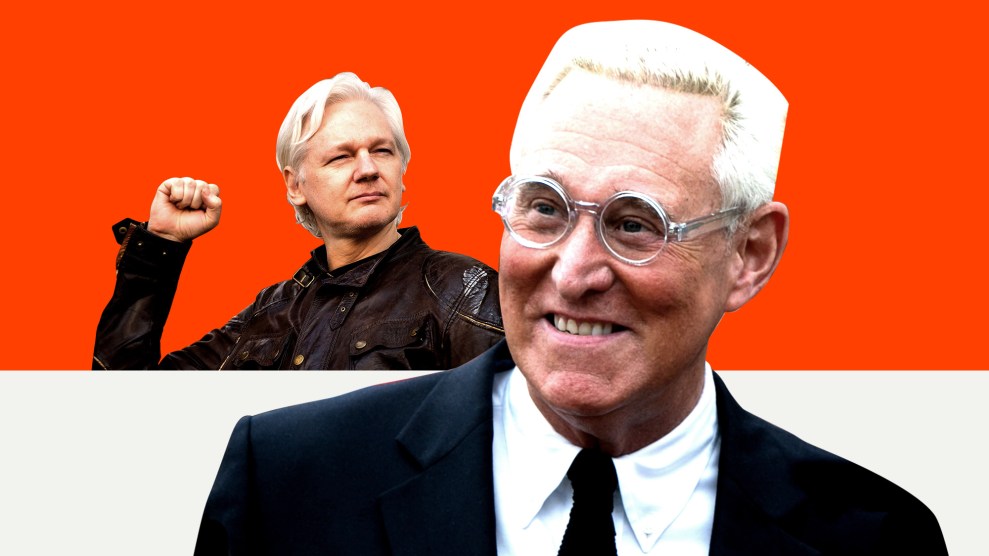 In early January, Roger Stone, the longtime Republican operative and adviser to Donald Trump, sent a text message to an associate stating that he was actively seeking a presidential pardon for WikiLeaks founder Julian Assange—and felt optimistic about his chances. “I am working with others to get JA a blanket pardon,” Stone wrote, in a January 6 exchange of text messages obtained by Mother Jones. “It’s very real and very possible. Don’t fuck it up.” Thirty-five minutes later, Stone added, “Something very big about to go down.”

The recipient of the messages was Randy Credico, a New York-based comedian and left-leaning political activist whom Stone has identified as his back channel to WikiLeaks during the 2016 campaign—a claim Credico strongly denies. During the election, Stone, a political provocateur who got his start working for Richard Nixon’s presidential campaign, made statements that suggested he had knowledge of WikiLeaks’ plans to publish emails stolen from Hillary Clinton’s campaign chairman, John Podesta, and other Democrats, and his interactions with WikiLeaks have become an intense focus of special counsel Robert Mueller’s ongoing investigation into Russian election interference. As Mueller’s team zeroes in on Stone, they have examined his push for an Assange pardon—which could be seen as an attempt to interfere with the Russia probe—and have questioned at least one of Stone’s associates about the effort.

“An effort by Stone to try to help Assange secure a pardon could be considered evidence of a conspiracy to obstruct justice,” says former prosecutor Paul Rosenzweig.

Assange has not been publicly charged with a crime in the United States, though the Justice Department has investigated WikiLeaks over its publication of classified material and role in releasing emails pilfered from Democratic targets by hackers working for Russian intelligence. Last year, Attorney General Jeff Sessions described arresting Assange, who for the last six years has taken refuge in Ecuador’s London embassy to evade criminal charges in Sweden stemming from a rape allegation, as a “priority.” Justice Department prosecutors have considered charges against Assange since 2010, when WikiLeaks released more than a quarter million diplomatic cables.

Credico says Stone repeatedly discussed his effort to win a pardon for Assange. At one point, he notes, Stone claimed he was working with Andrew Napolitano, a Fox News personality and former New Jersey Superior Court judge, on a plan in which Napolitano would float the idea on his show or directly to Trump. Napolitano said in a statement that he “categorically denies” working with Stone to secure a pardon for Assange.

Stone confirmed the pardon effort but declined to answer specific questions. “I most definitely advocated a pardon for Assange,” he said in an email. He also said he had “most certainly urged my friend Andrew Napolitano” to support an Assange pardon.

It is not clear how far Stone’s effort went, and Credico says he wondered if Stone was being truthful. Stone, he notes, also claimed to have helped convince Trump to pardon former Sheriff Joe Arpaio of Maricopa County, Arizona, in August 2017. A supporter of WikiLeaks and its enigmatic leader, Credico says Stone’s text messages concerning an Assange pardon were part of a barrage of communications the Republican operative sent him earlier this year in a bid to convince him not to dispute Stone’s description of Credico as his WikiLeaks go-between. “He was trying to get me not to talk,” Credico contends.

Stone’s pardon efforts have drawn scrutiny from Mueller. Sam Nunberg, a former Trump campaign aide who once worked closely with Stone, told Mother Jones that prosecutors asked him during a February interview if Stone “ever discussed pardons and Assange.” Nunberg said he had not heard Stone discuss such an effort, and prosecutors did not raise the subject during his subsequent testimony before a grand jury. Credico declined to say if the topic came up when he testified before a grand jury convened by Mueller last month.

Former federal prosecutors say Mueller’s interest in Stone’s bid to help Assange may be part of an effort to untangle the relationship between the men and could factor in a potential effort to expose a criminal conspiracy involving the hacked emails released by WikiLeaks. “If Stone worked with WikiLeaks on the release of DNC emails, an effort by Stone to try to help Assange secure a pardon could be considered evidence of a conspiracy to obstruct justice,” says Paul Rosenzweig, a former senior counsel to Kenneth Starr on the Whitewater investigation.

In August, Stone raised the notion of pardoning Assange in an interview with the Washington Examiner, suggesting that prosecuting him was akin to targeting a journalist. “Even the Obama Justice Department concluded Assange did nothing the New York Times and Washington Post have not done, which is obtain classified information through whistleblowers, verifying its authenticity and publishing it,” Stone said.

Stone has also publicly urged Trump to pardon others ensnared in the Russia probe, including his former business partner, Paul Manafort, who was found guilty of bank and tax fraud in August and pleaded guilty last month to money laundering, illegal lobbying, and other crimes, and Michael Flynn, who admitted lying to the FBI about his contacts with then-Russian Ambassador Sergey Kislyak during the presidential transition. Both Manafort and Flynn are cooperating with the Mueller investigation. When earlier this year Trump pardoned far-right pundit Dinesh D’Souza, who pleaded guilty to campaign finance violations in 2014, Stone described it as a sign that Trump allies mired in the Russia scandal could expect similar treatment.

“It has to be a signal to Mike Flynn and Paul Manafort and even Robert S. Mueller III: Indict people for crimes that don’t pertain to Russian collusion and this is what could happen,” Stone told the Washington Post.

The White House referred questions about Stone’s push for pardons for Assange and others to Trump’s outside counsel. One of Trump’s attorneys, Jay Sekulow, declined to comment, saying, “We don’t discuss our ongoing conversations with the Office of Special Counsel.”

Stone’s push was just one of several efforts by Assange allies to help him win a pardon or leniency. Last year, Adam Waldman, a lawyer who also worked as a lobbyist for Oleg Deripaska, an aluminum magnate reportedly close to Russian President Vladimir Putin, approached the Justice Department on Assange’s behalf. Waldman sought a deal with US prosecutors where Assange would get safe passage to the United States to discuss his plans to release a stolen archive of documents that WikiLeaks obtained detailing CIA hacking operations. Assange seemed to hope to use the CIA material as a bargaining chip to win a pledge of legal immunity. That effort fizzled: The Justice Department refused to negotiate and WikiLeaks dumped the CIA documents in March.

Subsequently, Rep. Dana Rohrabacher (R-Calif.), who is known for his pro-Russia views, advocated on Assange’s behalf. In August 2017, he met for three hours with Assange in London. Afterward, Rohrabacher pitched White House Chief of Staff John Kelly on a plan where Trump would pardon the WikiLeaks founder in exchange for Assange releasing information that would supposedly contradict the US intelligence community’s conclusion that Russia had hacked the Democratic National Committee. Kelly reportedly declined to pass the idea on to Trump.

Barry Pollack, a lawyer who represents Assange in the United States, said in an email that he is not “involved in any efforts to obtain a pardon on [Assange’s] behalf.” But Pollack said, “A pardon for Mr. Assange is warranted. He has been in legal limbo for far too long, merely for publishing truthful information.”

Mueller’s examination of the pardon push forms part of the special counsel’s broader probe of Stone’s relationship and contacts with WikiLeaks—an investigation that appears to be heating up. The Washington Post recently reported that Credico told Mueller’s grand jury that Stone claimed in September 2016 that a different source was supplying him with inside information concerning WikiLeaks. (Stone told the Post he was referring only to secondhand information passed to him from a journalist.) CNN reported on Monday that Mueller has been looking into whether right-wing conspiracy theorist Jerome Corsi acted as an intermediary between Stone and Assange.

The special counsel’s scrutiny has many people, including Stone, speculating that the self-described dirty trickster may be indicted after the midterm elections. As Stone recently emailed supporters while drumming up donations to his legal defense fund, “Robert Mueller is coming for me.”