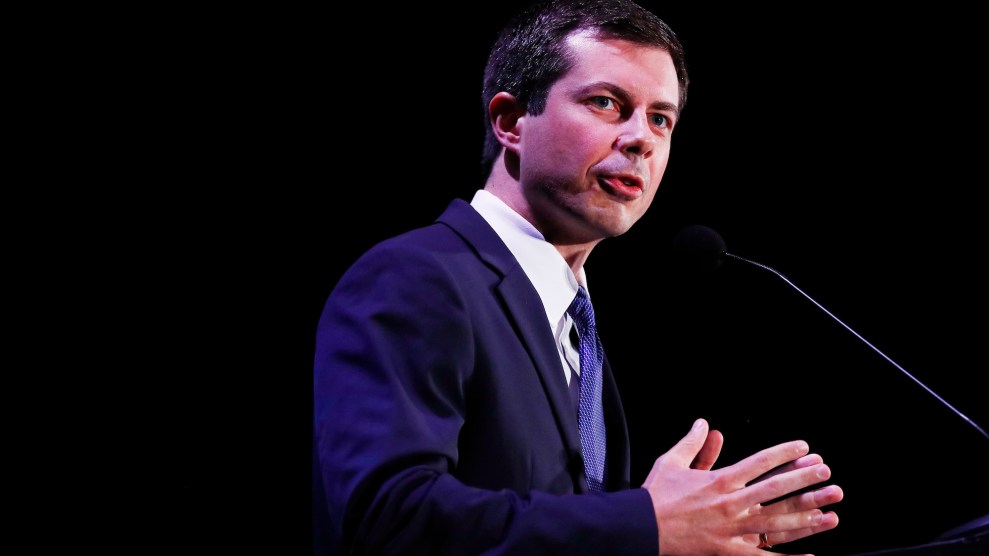 In one of his first appearances back on the campaign trail since a white police officer shot and killed a black man in his city, South Bend mayor and 2020 Democratic hopeful Pete Buttigieg addressed the violence before a crowd of Democrats in South Carolina, an early primary state with a large black population.

Buttigieg had spent the last week back in South Bend after Sgt. Ryan O’Neill shot and killed 54-year-old Eric Logan while responding to a call about someone breaking into vehicles. Logan reportedly had a knife, and O’Neill fired when Logan proceeded to walk towards him. Court documents obtained by HuffPost suggest the officer had a history of making racist comments.

Buttigieg reserved judgement when he spoke at the South Carolina Democrats’ State Convention in Columbia on Saturday. “It’s like one member of our family died at the hands of another,” Buttigieg said. The South Bend mayor also declined to directly confront the racial elements of the death. “We already know why such deep wounds are surfacing, why our whole community hurts,” Buttigieg said, adding that South Bend “is full of people who believe in safety and justice.”

How Buttigieg addressed the shooting would be under heavy scrutiny during his appearance today in South Carolina, where more than a quarter of the early primary state’s population is black. Buttigieg drew criticism earlier this year when a 2015 speech surfaced showing the mayor had said “all lives matter,” a phrase often invoked as a racist rebuttal to the Black Lives Matter movement. (Buttigieg said he stopped using the phrase once he learned what it symbolized.)

But several instances of racial discrimination within South Bend’s police department have called into question how well Buttigieg has addressed racial unrest as the mayor of a city that is 26 percent black. Before Buttigieg departed for the Palmetto State, marchers confronted him and South Bend police chief Scott Ruszkowski on Friday evening, demanding that the city’s leaders fire police officers and require those that remain to complete additional training.

According to the South Bend Tribune, Shirley Newbill, the mother of the slain man, told Buttigieg to take action swift action to address the protesters’ concerns.  “I have been here all my life, and you have not done a damn thing about me or my son or none of these people out here,” she said. “It’s time for you to do something.”

For all of his subtlety in describing the situation on his own backyard, Buttigieg didn’t shy away from addressing other instances of racial violence. He made a direct attack on the deadly “rising tide of white nationalism,” calling attention to the 2015 shooting at a predominantly African American church in Charleston, South Carolina, that left nine dead.

In his stump speech, Buttigieg also made a kitchen table appeal to black voters. He referred to his “Douglass Plan” for promoting economic prosperity among African Americans, which he announced in advance of his appearance at the Black Economic Alliance presidential candidate forum last Sunday. The proposal, named for the abolitionist Frederick Douglass, calls for, among other measures, tripling the number of entrepreneurs in underserved communities over 10 years, reducing the American prison population by 50 percent, and increasing the rate of federal contracts awarded to minority and women-owned businesses.