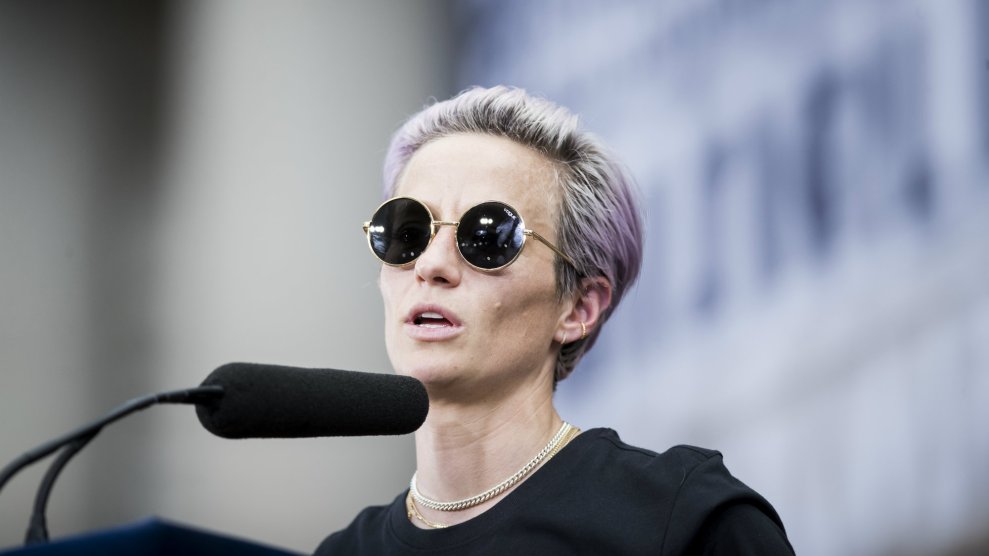 Soccer star Megan Rapinoe, just weeks after leading the United States to its latest Women’s World Cup championship, ripped President Donald Trump for his racist attacks against Rep. Ilhan Omar (D-Minn.), including the “send her back” chants used by his supporters at a rally last week.

“At every step it’s shocking,” Rapinoe said. “I hope people don’t stop being shocked by it all, because it’s truly the worst of the worst.”

“It’s truly the worst of the worst.”

Trump urged Omar and three other progressive congresswomen of color last week in a tweet to “go back and help fix the totally broken and crime infested places from which they came.” Of the four lawmakers—all of whom are American citizens—only Omar was born outside the United States. That fact hasn’t stopped Trump from sliming her as “extremely unpatriotic and extremely disrespectful to our country.”

At a campaign rally in Greenville, North Carolina on Wednesday, Trump escalated his criticism of Omar until his supporters erupted in “send her back” chants reminiscent of the “lock her up” slogan his campaign deployed against Hillary Clinton.

Rapinoe, who was in Charlotte on Saturday to attend an exhibition soccer match, said Omar, one of the first Muslim women to serve in Congress, “should be celebrated, if anything.”

“To come here and be in Congress—to be the woman that she is, to be the leader that she is, to bring that different voice to the table—I think is something incredible,” Rapinoe told the Charlotte Observer. “Something that we need in this country to be better.”

It’s not the first time Rapinoe has clashed with Trump, who tweeted a broadside against her last month for telling reporters she would not visit the White House if the Americans won the World Cup. “Megan should never disrespect our Country, the White House, or our Flag, especially since so much has been done for her & the team,” Trump said.

During a national team game in September 2016, Rapinoe knelt during the national anthem, emulating the example set by NFL quarterback Colin Kaepernick, in a protest against racial injustice. Rapinoe, a staunch supporter of LGBTQ rights, has more recently become a leading advocate for the US women’s team to receive equal pay to the men’s team and a critic of Trump’s policies. Earlier this month, she told CNN’s Anderson Cooper that Trump needed to “do better for everyone.”