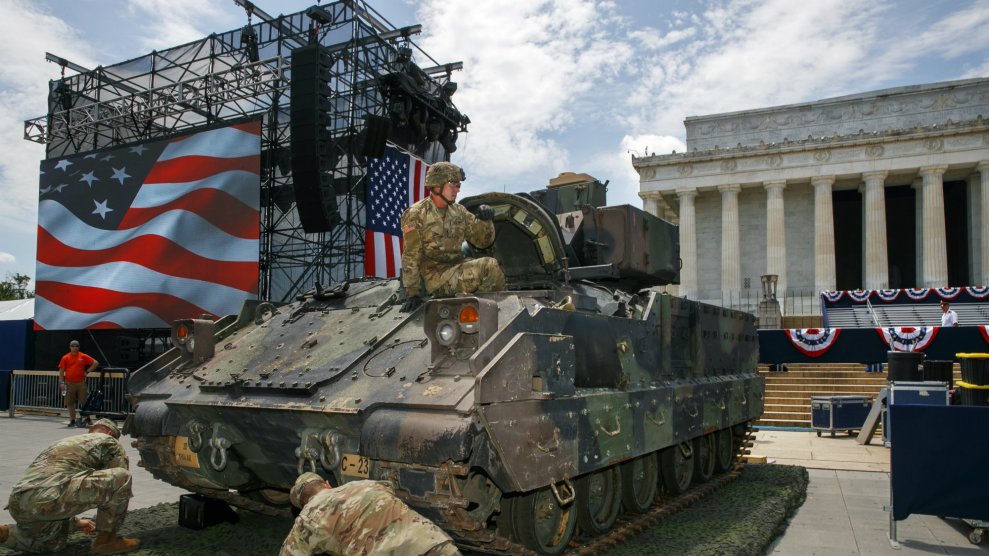 Tanks are rolling into Washington, DC, tomorrow for Donald Trump’s “Salute to America,” a revised version of the city’s annual Fourth of July celebration that the president promises will be the “show of a lifetime.” It will be a full-on military display, which—in addition to the tanks—includes “multiple flyovers,” military music, a Trump speech in front of the Lincoln Memorial to top Republican donors and political appointees, and, of course, fireworks. All of which has caused the National Park Service to divert nearly $2.5 million typically used to improve its parks to cover the costs.

Realizing this will be a controversial event, the Pentagon has distributed instructions to service members participating in the shindig on what to do if approached by a reporter, and the advice is essentially this: Say you love your tank.

Since this is a military celebration, there’s sure to be plenty of military personnel in attendance—alongside hordes of reporters angling to get the inside scoop from service members about what they really think of this whole celebration. Not on Trump’s watch.

Mother Jones obtained a photo of a card that is being distributed to participating service members with instructions from the Pentagon about what to say—and not to say—when speaking with members of the media. The Department of Defense would like service members to be clear that they are “proud” on several levels. Under the overall messages, the guide suggests: “I am proud of my job and my vehicle/tank. I am glad to share my experience with American People.” It also proposes that they say: “I am proud to honor the Nation and the Armed Forces during this Independence Day Celebration.”

That’s followed by “Dos” and “Don’ts,”—do “smile and have fun,” don’t “guess, lie, or speculate.” And the card closes with general tips for talking to a reporter. “Relax and speak to America,” it recommends.