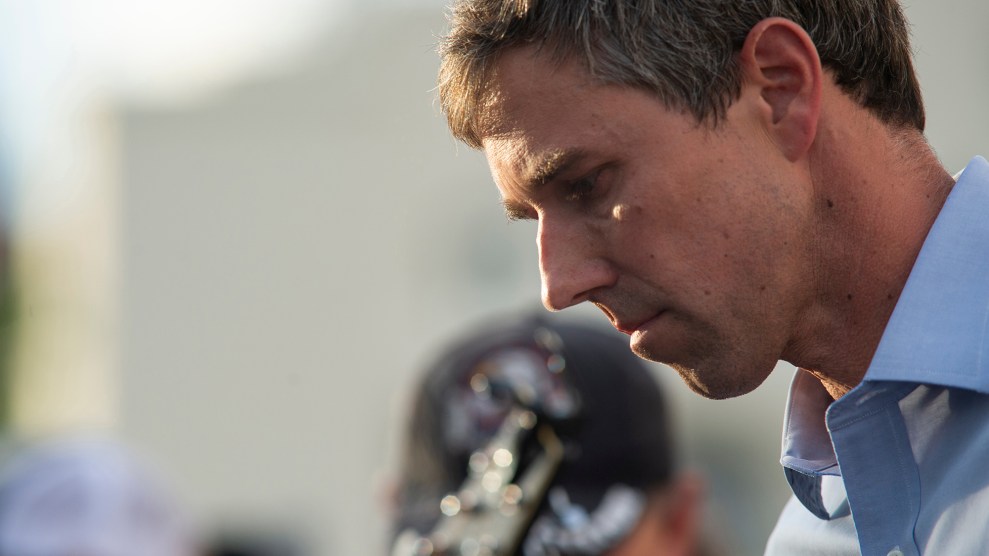 Former congressman and Democratic presidential candidate Beto O'Rourke speaks at a vigil in El Paso, Texas, on August 4, the day after a mass shooting there left 22 people dead. Josh Bachman/ZUMA

Three days after Beto O’Rourke launched his presidential campaign in March, he promised to stop swearing. Using the f-word is part of the former congressman’s nature. When he conceded his shockingly close Senate race against Ted Cruz last November, he famously dropped an f-bomb. He blurted “motherfuckers” in front of his children, in the presence of a Vanity Fair reporter. But when a voter in Wisconsin asked him to please stop swearing in front of the children, O’Rourke agreed to conduct his campaign by the book. “We’re going to keep it clean,” he said.

He kept his promise—mostly. On August 4, the day after an anti-immigrant terrorist murdered 22 people at a Walmart in El Paso, O’Rourke’s hometown, a reporter asked O’Rourke how President Donald Trump could “make this any better.” O’Rourke responded, “He’s been calling Mexican immigrants rapists and criminals. Members of the press, what the fuck?”

Still, for the most part, O’Rourke has stuck to the script. After running an unconventional Senate campaign in 2018 that brought him within a hair of winning Texas, he entered the presidential race as a top candidate, and he campaigned in the usual, safe way. He spent enormous amounts of time in Iowa and New Hampshire. He stopped jumping on tables and countertops to address crowds. He stopped swearing. And his poll numbers dropped. Lost amid rivals with better name recognition (Biden, Sanders) and fiery debate performances (Warren, Harris), his average support in polls has fallen below 3 percent.

On Thursday, O’Rourke officially threw out the book. It wasn’t working for his struggling campaign. And, he argued Thursday in an address announcing his return to the campaign trail after taking 10 days off to respond to the mass shooting in his hometown, it wasn’t working for the country. The book is for normal times and normal elections. But if you believe that Trump is an existential threat to this country, he argued, then something different is needed. The book does a disservice because it signals that everything is normal.

“As we had head back on the campaign trail today, I know there’s a way to do this better,” O’Rourke said, standing before a lectern on a hill, with the modest El Paso skyline behind him. “And that came to me last week. Someone asked if I was going to be heading back to Iowa to go to the Iowa State Fair. Corn dogs and Ferris wheels. And I said, ‘No, I cannot go back for that, but I also cannot go back to that.’ The kind of challenges that we face in this country at this moment of crisis require an urgency.” Instead, he would draw a new campaign map. “To those places where Donald Trump has been terrorizing and terrifying and demeaning our fellow Americans, that’s where you will find me in this campaign,” he pledged. “Anyone that this president puts down, we are going to do our best to lift up.”

O’Rourke didn’t drop any f-bombs in this speech—though he couldn’t help using the word “shittiest”—but the new type of campaign he promised was even more striking. The El Paso attack, he said, was the turning point for him. “I see more clearly” after the massacre, he said again and again. What he saw was that Trump’s rhetoric and actions threatened to turn—and had turned—Americans violently against each other. He drew a straight line from Trump‘s incitements to violence at his rallies to the deaths of 22 people at the Walmart. “I’m confident that if at this moment we do not wake up to this threat, then we as a country will die in our sleep,” O’Rourke warned Thursday.

“Someone asked if I was going to be heading back to Iowa to go to the Iowa State Fair. Corn dogs and Ferris wheels. And I said, ‘No, I cannot.'”

Of course, O’Rourke’s 22 Democratic rivals for president haven’t just stuck to corn dogs and Ferris wheels either. Multiple candidates visited the Homestead detention center in Florida in June, for example, to protest the administration’s inhumane treatment of immigrant children. And none of the other candidates would say that Trump is normal. But O’Rourke is doing what the pollsters and pundits warned explicitly not to do: Make it about Trump. When Elizabeth Warren launched her campaign, she famously didn’t even mention Trump as she made her way across Iowa and New Hampshire.

O’Rourke’s speech was also a love letter to El Paso and a plea to confront racism. But at its core, it was a campaign relaunch centered on confronting the president. Instead of taking the Houston Chronicle’s advice to drop out and run for Senate again, O’Rourke on Thursday explained why he would plow on: “We must take the fight directly to the source of this problem—that person who has caused this pain and placed this country in this moment of peril. And that is Donald Trump.”

This may not be the campaign anyone recommended. And it’s still unlikely to make O’Rourke the nominee. But the “twist,” says Democratic pollster Mark Mellman, is that it sets him apart. “Since they are all out there saying what they are for, there is potentially room for someone to say, ‘I’m the biggest enemy of Donald Trump.’” For a candidate whose poll numbers are in the low single digits, whose fundraising has lagged, and who needs to make a change, Mellman says, this is “not crazy.”

In some ways, it’s vintage O’Rourke: an inspirational candidate who can diagnose the country’s problems but is vague yet hopeful on how to fix them. “I want to be the leader for this country that we need right now and that we do not have,” he said Thursday, appearing far more confident and assertive than in his wooden debate performances. “Someone who will not only not tear us apart, but do everything within their power to bring us together. Someone who doesn’t enflame but instead heals.” It sounded like O’Rourke in 2018, and a bit like the guy who, before announcing his candidacy, took a road trip to ponder his future and connect with the people in diners. This time, it’s a trip to the places targeted by Trump.

O’Rourke’s campaign relaunch is still unlikely to make him the nominee. But if he’s to have any chance, he seems to have realized, he needs to do something different—to show that when it comes to the usual campaign playbook, he no longer gives a f*ck.

This story has been updated to note that O’Rourke did, in fact, use profanity in his speech.