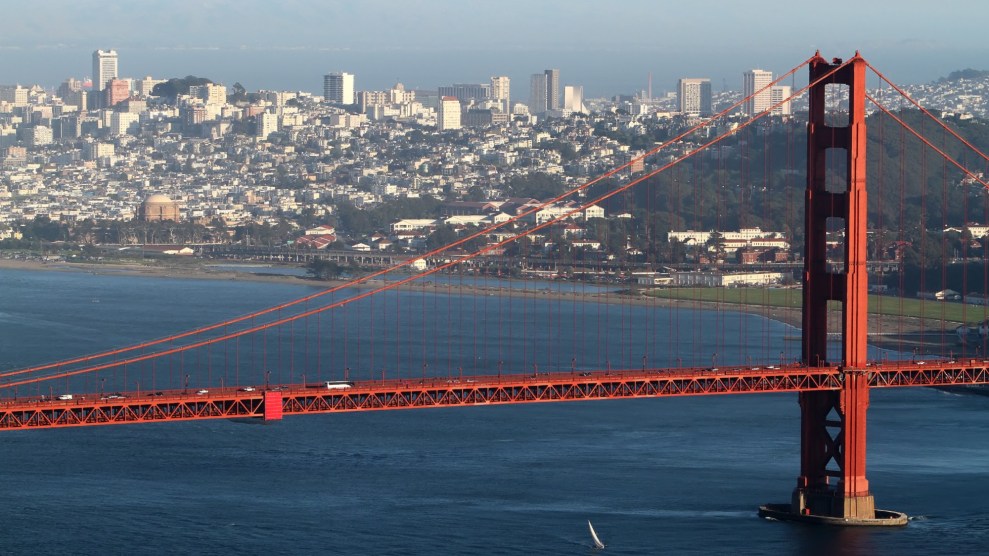 A general overview of the Golden Gate Bridge from the Marin Headlands in San Francisco, California on Saturday, Sept. 17, 2011. Alex Menendez/AP Photo

On Wednesday, the Environmental Protection Agency issued a notice of environmental violation to San Francisco after President Donald Trump claimed that the city’s large homeless population was causing water pollution.

Addressed to Harlan Kelly Jr., the general manager of San Francisco’s Public Utilities Commission, the letter alleges that discharges in San Francisco’s drainage system contained heavy metals and bacteria, which were subsequently polluting the ocean and nearby beaches. The letter further alleged that the city had failed to properly clean, inspect, and repair its wastewater treatment and sewer system.

“The failure to properly operate and maintain the city’s sewage collection and treatment facilities” have resulted in main and pump station failures “that have diverted substantial volumes of raw and partially-treated sewage to flow across beaches and into the San Francisco Bay and the Pacific Ocean,” the letter states. The EPA charged that “approximately one and a half billion gallons of combined sewage annually” had ended up in beaches and recreational areas, a point that the city’s leadership strenuously denies.

All of this began last month, when after visiting San Francisco, President Trump warned that the city was potentially in violation of the Federal Clean Water act. He claimed that the size of the homeless population resulted in needles and human waste being poured into the ocean.

San Francisco Mayor London Breed and other city officials vehemently denied that claim, arguing that the city has some of the most advanced filtration systems in the country. “In San Francisco we are focused on advancing solutions to meet the challenges on our streets,” she wrote in a statement, “not throwing off ridiculous assertions as we board an airplane to leave the state.”

San Francisco’s mayor London Breed also issued a response. “I’m sick of this president taking swipes at our city for no reason other than politics,” NPR reported she said. “As I’ve said before, there are no needles washing out to the Bay or ocean from our sewer system, and there is no relationship between homelessness and water quality in San Francisco.”

None of the claims made by Trump’s EPA connecting the city’s homelessness crisis to water pollution have been supported by city officials, who say that catch basins—grates on top of drainage pipes—trap debris such as needles coming out of storm drains, and that pollutants are subsequently processed in one of two treatment facilities located in the city. No specific repercussions were laid out in relation to this violation notice, but the EPA warned San Francisco that it could be hit with fines and penalties related to the Clean Water Act.

Trump’s fight over water pollution in San Francisco is part of a general attack on California, which includes the administration’s recent revocation of the state’s ability to set stricter automobile fuel admission standards than the national standard.

“We welcome EPA’s sudden interest in enforcing the Clean Water Act and Clean Air Act, which has been conspicuously absent since President Trump took office,” said Eric Schaeffer, former Director of Civil Enforcement at EPA and current Executive Director of the Environmental Integrity Project said in a statement. “But a regulatory agency’s enforcement authority is not supposed to be used as a political weapon, which is obviously happening here. It makes no sense to decide that homeless encampments are a major priority for Clean Water Act enforcement, when EPA has done so little to enforce illegal discharges from much larger sources across the US.”