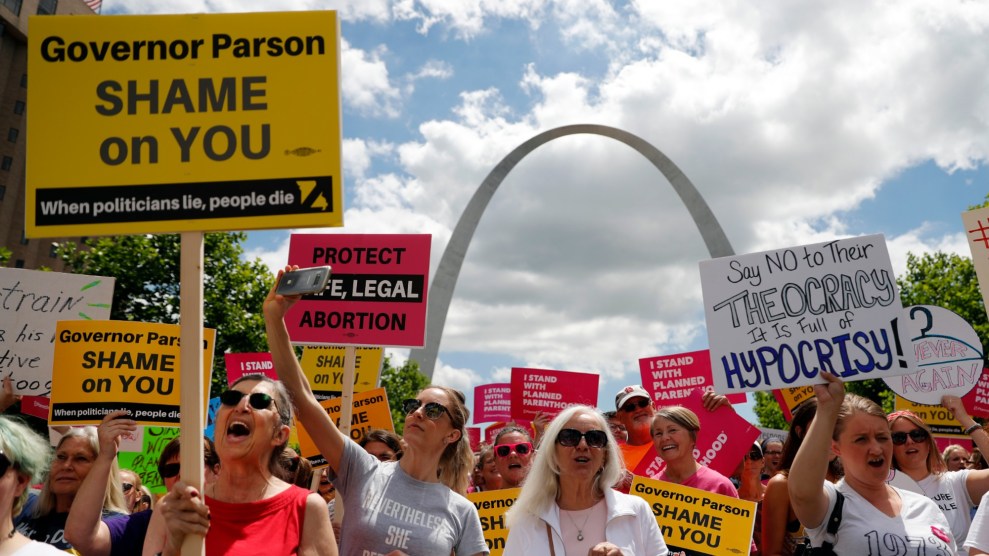 Abortion rights supporters take part in a protest on May 30 in St. Louis. Jeff Roberson/AP Photo

A hearing this week will determine the fate of Missouri’s only remaining abortion clinic—and whether Missouri will become the first state in the country not to have a single abortion clinic since Roe v. Wade.

At the conclusion of the week-long hearing, which began Monday, a state commissioner will decide whether Reproductive Health Services of Planned Parenthood of the St. Louis Region will be able to keep its license to provide abortions. It is the latest hurdle in the abortion clinic’s months-long fight against the state government.

Over the summer, the Missouri Department of Health and Senior Services demanded to question clinic doctors over claims that the clinic had “potential deficient practices.” The clinic denied the state’s request to interview the doctors, claiming that the forced interviews were a form of harassment and intimidation because the constantly changing enforcement of regulations ensured that providers never knew when they were violating the state’s protocols and could be subject to civil or even criminal penalties following these interrogations. As a result, the health department declined to renew the clinic’s license, leading Planned Parenthood to sue. Planned Parenthood argued that the state had “weaponized the licensing process.”

As I reported in June, the uncertainty surrounding the clinic has taken a toll on both abortion providers and clinic patients. Dr. Colleen McNicholas, one of the doctors at the clinic, told me that the state’s 72-hour waiting period between an initial visit and an abortion has left patients in limbo, unsure if the clinic will still be operating when they come back for their second appointment.

The hearing is taking place before Missouri’s Administrative Hearing Commission. A single commissioner will determine whether the St. Louis Planned Parenthood will be able to keep its license to perform abortions. The hearing is set to conclude on Friday afternoon. According to NPR, the commissioner will hear the state health department’s case against the clinic during the first part of the week and Planned Parenthood’s response during the second half.

While the fate of Missouri’s final abortion clinic remains in the balance, states like Illinois are stepping up their efforts to protect reproductive rights and serve patients from neighboring Missouri. In June, Illinois passed the Reproductive Health Act, which recognizes the right to reproductive health care, including abortion, contraception, sterilization, pregnancy and maternity care. The law also states that “a fertilized, egg, embryo or fetus does not have independent rights.” Illinois Planned Parenthood has announced the opening of a new 18,000-square-foot mega-clinic in Fairview Heights, a mere 15 miles from the Missouri border, which it hopes will be able to provide Missouri residents with care regardless of the outcome of this week’s hearing.