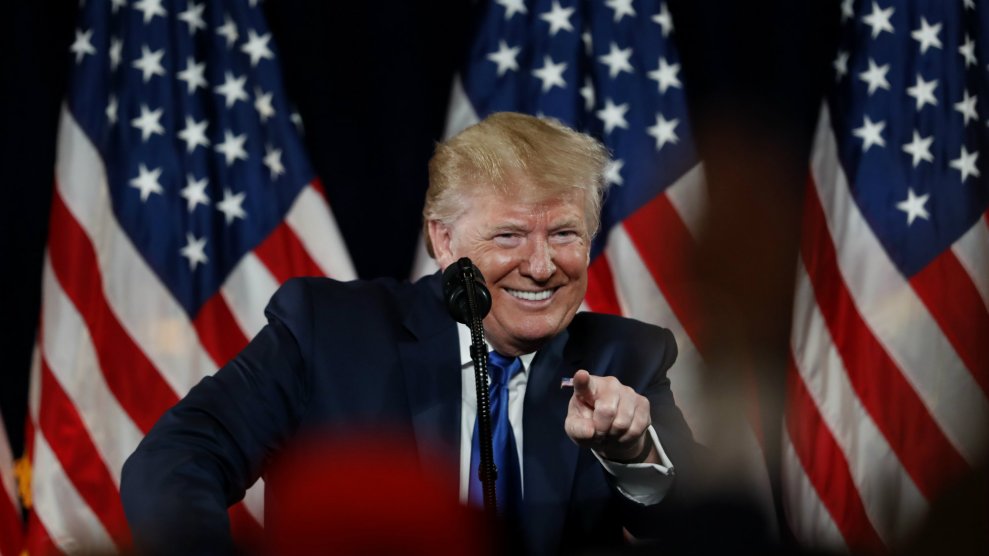 The election is one year away, the impeachment inquiry is heating up, and Donald Trump wants those black votes. On Friday, the president went to Atlanta for the launch of Black Voices for Trump. The new grassroots coalition is an attempt by Trump’s reelection campaign to win over more black voters than he did in 2016.

Good luck with that.

Though this was supposed to be a rally to announce a new black coalition, it was a standard Trump rally. Trump took shots at Nancy Pelosi and the Democratic Party. He called members of the press the “fake news media.” He touted all the things he sees as accomplishments for the African American community, like a lower unemployment rate and the First Step Act, a bill that curbs mandatory minimum sentences and allows inmates to petition for quicker release but has come under its own share of criticism. He also accused immigrants of taking jobs from black people. And of course he complained about the Russia investigation and the impeachment process.

The festivities in Atlanta got started early, with black Trump supporters lined up and decked out in their Blacks for Trump tees.

The Florida-based group Blacks for Trump traveled to Atlanta today to support @realDonaldTrump’s launch of the “Black Voices for Trump” coalition. pic.twitter.com/C2cejZS5zk

The shirts were obviously a big hit! (The women behind this white couple seem just as confused as the rest of us.)

Oh this “Blacks For #Trump” rally in #Atlanta is already off to a comedic start! 🤦🏾‍♂️😩 pic.twitter.com/g0qFZO7QwD

After being introduced by Secretary of Housing and Urban Development Ben Carson, Trump asked the crowd which term they preferred, “black” or “African American.” The crowd began chanting “Blacks for Trump! Blacks for Trump!” much to the president’s delight. He also reminded the crowd, “People forget, Abraham Lincoln was a Republican!”

It’s unclear how this will bring new black voters to his side. They care about the same things other progressive voters care about. They want climate action, anti-racist policies, and a fairer tax system. And those things are anathema to Trump.

And despite the dozens of retweets of the Trump campaign’s account from black supporters, the president is deeply unpopular in the black community. In 2016, Trump got 8 percent of the black vote. At the rally, he said African Americans were joining his side “in record numbers,” but his approval ratings among black voters hovers around the teens, depending on how far out he is from saying something racist on Twitter.

If you’ve been paying even a modicum of attention since Trump first walked onto the political stage, those low numbers aren’t surprising. Trump launched his political career by propagating the lie that Barack Obama was a secret Muslim born in Kenya. He became one of the loudest birthers demanding that Obama provide his birth certificate and school records. In 2017, after white nationalists descended on Charlottesville, Virginia, and one killed Heather Heyer after plowing his car into a crowd of protesters, Trump said that there were “very fine people” on both sides. He also reportedly referred to Haiti and African countries as “shithole countries.” In 2019 alone, Trump suggested four brown and black congresswoman “go back” to their countries, despite the fact that three of the four were born in the United States; called Baltimore, which is part of the late Elijah Cummings’ congressional district, “rat infested” after Cummings criticized the Department of Homeland Security for poor conditions in immigrant detention centers; and compared the impeachment inquiry process to lynching.

If Trump was serious about bringing new black voters into the fold, he’d have to offer them something different from his usual rants. Or maybe he’s just hoping black people will simply forget the last three years.