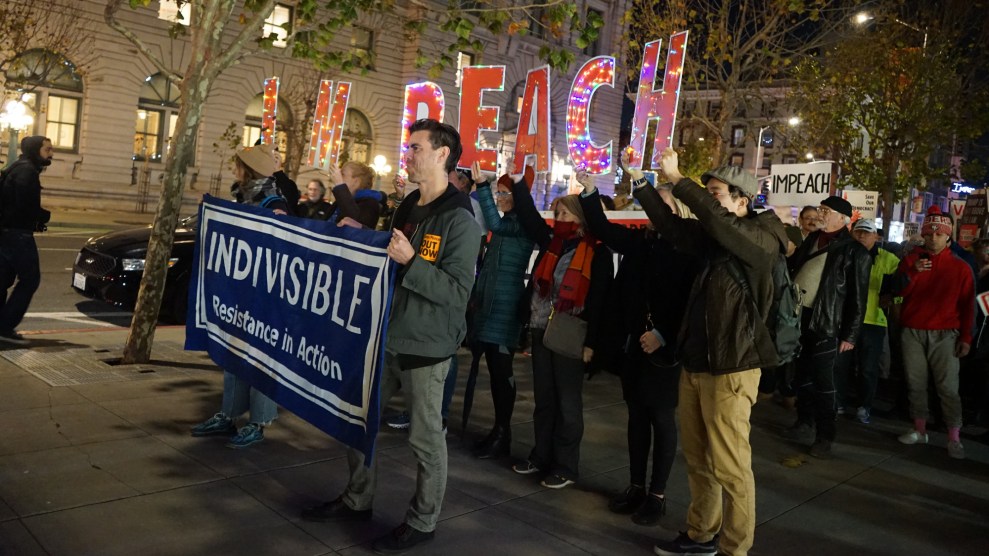 With picket signs, chants, and a clear message—impeach and remove President Donald Trump—hundreds of protesters rallied Tuesday at San Francisco’s Federal Plaza on the eve of a crucial House vote to impeach the president. The rally, one of over 600 nationwide, was organized by the progressive activist group Indivisible. As they marched from the Federal Building to the office of Sen. Kamala Harris, bundled against the December chill, demonstrators raised their voices and signs against Trump.

At the San Francisco rally, participants said that they hoped to send a message to Congress.

“I want elected officials and the media to see that the public supports impeachment,” said Johnathan Goldman, a demonstrator at the rally. “This is popular. It is both right and popular. The public demands it.”

Goldman, who previously worked for the activist group Swing Left, expressed his belief that impeachment represented a critical moment for the country. “If we don’t stand up and say that this is impeachable, then nothing is.”

Others at the event appeared to grapple with a conflict between the gravity of the allegations against Trump and a lack of faith in Congress’ willingness to act.

“I think [impeachment] is the only responsible thing to do. He has so clearly violated both the spirit and letter of the law, every chance he gets, that we have no choice,” said Edna Stoehr, another attendee. She was clear in her reasoning for marching, but less hopeful about the results. “For the Senate, I think nothing will shame them. I think that cynicism and hypocrisy will, I hope, come back to haunt them.”

Wednesday’s House vote on impeachment is expected to pass along party lines, leading to a trial in the Senate. A Washington Post/ABC poll found that 71 percent of respondents believed senior White House official Mick Mulvaney and former national security advisor John Bolton should be allowed to testify before the Senate, despite opposition from Senate Majority Leader Mitch McConnell (R-KY). 49 percent of respondents believed that Trump should be impeached. It’s the latest in a recent wave of growing support for impeachment.

At the San Francisco rally, impeachment supporters seemed to be marching for causes far beyond transcripts and Ukrainian aid. Amid the outrage, there was a sense of exhaustion, and a yearning to return to a less chaotic politics.

“I just hope that everybody can get together and be on the same page,” said Sudi Taleghni, a former Republican who was present at the rally. “I’m really disillusioned by politicians who take their job to mean that they have to be reelected—not protect the Constitution.”