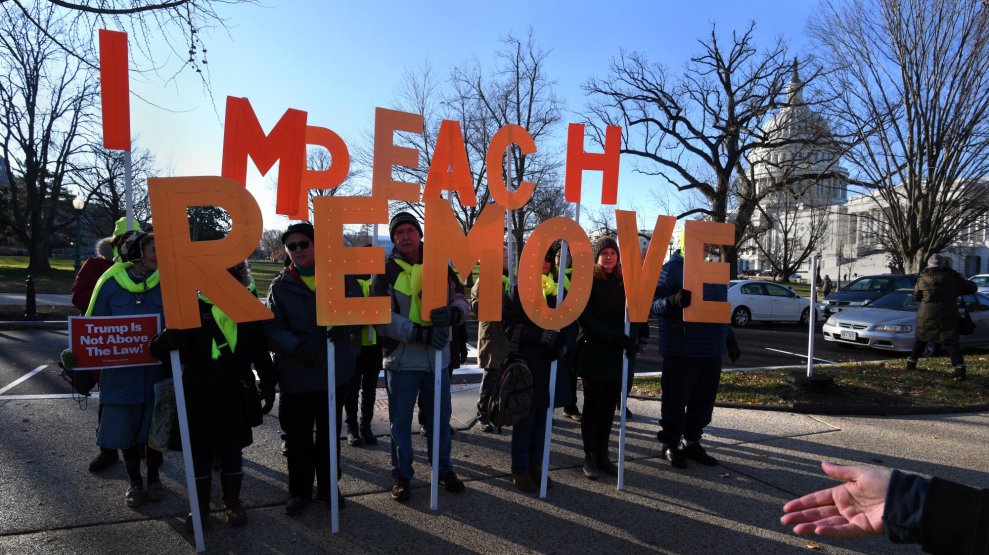 Across the country Tuesday night, thousands of people rallied in support of impeaching President Donald Trump. In San Francisco, hundreds of people showed up at Federal Plaza with picket signs and chants. In New York, more than a thousand people gathered in Times Square in the rain and cold to make their voices heard. A couple hundred people even reportedly showed up to a park in Charlotte, North Carolina, reciting the Pledge of Allegiance and singing “America the Beautiful.”

But on Wednesday morning—the day the House of Representatives, for only the third time in United States history, was set to formally impeach a sitting president—it was business as usual in Washington, DC. By 9 a.m., the grounds of the US Capitol were quiet and calm with the only sliver of excitement taking place in a park situated on the Senate side of the building. There, a few hundred people were huddled under the shadow of the Capitol’s dome as speakers associated with MoveOn.org and Indivisible—two progressive advocacy groups that were the main organizer’s of this week’s nationwide protests—spoke about the importance of the impeachment process.

It wasn’t that people weren’t excited—those in attendance, most of whom were clutching bold and clever pro-impeachment picket signs, absolutely were—but that the turnout wasn’t exactly what I expected for a demonstration on the morning of one of the the most important days in modern US history.

Three years in, the Trump presidency has provided plenty of opportunity for people living in the District to get a front-row view of Democracy in action. For the first year he was in office, it felt like a day didn’t go by where people weren’t taking to the streets in opposition to something Trump said or did. There was the historic Women’s March, of course, which kicked off a new era of activism in DC. But there were also large-scale protests in DC after Trump signed his controversial travel ban. And the March for Science, with nearly 100,000 participants on Earth Day in 2017 to push back against Trump’s denial of climate change. The March for Racial Justice that same year, which drew thousands to the National Mall to demand racial equity and justice. And dozens more demonstrations that attracted crowds of thousands throughout the streets of DC.

“What’s appealing about protests and why they’ve been such a staple of this administration is that they’re an incredibly accessible way to be involved in politics,” Elyssa Feder, the executive director of Rising Organizers, a coalition that trains organizers and activists for progressive movements, told me when I spoke to her the evening before the impeachment vote.

But in recent months, the sentiment feels more like “Trump did ______, why aren’t we in the streets?”

There’s no easy answer to that question, but Feder thinks a lot of it has to do with “issue fatigue”—the reality that a lot of people wore themselves out physically and mentally taking to the streets in the beginning of the Trump’s presidency. “It has been one of the facets of this administration to really exhaust people,” she tells me. “And that is something I don’t think anyone has a fix for, to be totally honest.” That might be why protests in DC have waned in recent months: After four months of impeachment talk, people are exhausted. When Trump passed his first Muslim ban, Feder recalls her organization’s training before the airport protests filled up to capacity in hours, with nearly 2,000 people attending. By the third Muslim ban, and subsequent protest, about 50 people showed to her training, she recalls.

“If we keep organizing and talking to our neighbors and taking action and talking about our democracy, and if we hold this line, at this moment in our history, then we can restore a government that is worthy of all Americans,” said Will Goodwin, the director of government relations at the progressive group VoteVets, at the pro-impeachment rally outside the Capitol. His comments, like most of those who spoke on Wednesday morning, were met with a slightly less-than thunderous applause.

Impeachment merch sales are going well, in case you were wondering. pic.twitter.com/ojGszYeBBR

Just beyond the small stage where Goodwin spoke, a street vendor set up shop to sell a host of pro-impeachment buttons. “Impeach. Indict. Imprison.” one of them read. Another had the Looney Tunes logo with Trump’s head in place of Porky Pig’s. One woman asked how much he was selling them for, but wandered away before she could get an answer.

Behind the vendor, a man dressed in a full Santa costume stood solemnly with a sign showing “Santa’s Naughty List,” which, of course, includes Trump, along with several other GOP members caught up in the impeachment scandal, like Vice President Mike Pence and Devin Nunes, the House intelligence committee’s ranking member. “I do not think that we have enough real Americans in the Senate to do the right thing,” Santa, whose real name is Daniel, told me when I asked him if he thinks Trump’s impeachment will result in his removal from office. “I think it’s motivating his base, unfortunately, but it’s necessary, I think, to shine a light in the dark places on all the corruption that’s been here,” he added.

By 10 a.m., the impeachment rally was in full swing when Adam Browning, a teacher at the Washington Leadership Academy charter school in DC, showed up with his class of students, some donning signs saying “IMPEACH” and “#RESIST.” As part of a seminar on politics he’s teaching, his students are currently learning about the impeachment process and, as such, advocated to come to the demonstration. “We like to use what’s happening in our backyard as our classroom,” he told me.

But less than an hour later, the hundreds of people rallying in front of the Capitol had whittled down to only a couple dozen. “Good protests are the result of good organizing, and this wouldn’t be happening without the dedicated organizers and networks that have been building over the last two years,” Feder told me. “Protests are an inflection point; they’re not the point.”