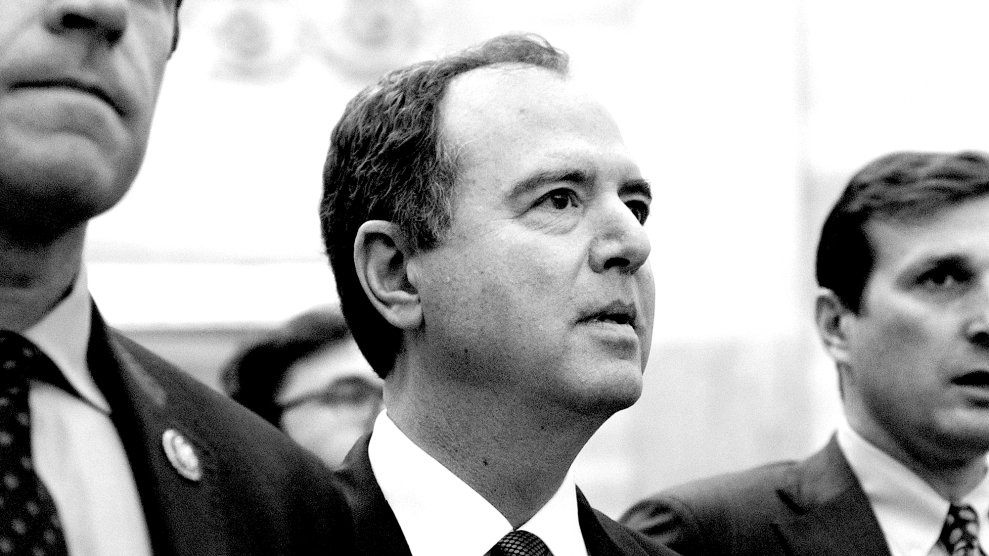 How the hell did we get here? That’s what Rep. Adam Schiff (D-Calif.) wants to know. The congressman and colleagues have introduced legislation to set up a commission to investigate and identify how the Trump administration failed in its response to the coronavirus. (Based on our timeline of the first 100 days of Trump’s response, they’ll have plenty to look into.)

Schiff recently joined Mother Jones Editor-in-Chief and the Commonwealth Club to talk hiring Twitter trolls into top intelligence positions, and chat about his alternative to universal basic income. “Real time oversight is vitally important,” he says.  Even if it’s hard “to do meaningful oversight when you’re dealing with bodies that don’t particularly want to share the answers.” But Schiff believes his experience from the impeachment trial has prepared him for it.

You can watch the full interview here, or read an edited transcript below.

Congressmen, at the end of the impeachment trial, you posed a rhetorical question to the Senate: “You may be wondering how much damage the president can do over the next few months before the election.” Then you said, “A lot, a lot of damage.” What were you imagining then and how does that square with what’s happening now?

I don’t think anyone anticipated that we would very soon lose more lives than we did during the Vietnam War, and it’s due to the incompetence and maladministration of this president. We grossly underestimated the damage that he could do.

The impeachment proceedings and then-trial centered around the accusation that Trump essentially extorted the president of Ukraine and then covered it up. How is that mentality playing out here?

Those that have been willing to say nice things about him have seen the Trump campaign take those statements and put them into campaign ads. We can’t have any confidence that this president or his administration are making those decisions on the basis of science, on the basis of need, on the basis of what’s in the best interest of the American people, but as we said during the trial, the one thing you can always count on Donald Trump for is, he will do what’s right for Donald Trump, not what’s right for the country.

You said it’s hard to tell if something is of corrupt intent or just incompetence. How are you untangling that right now?

It’s certainly not in the national interest for Donald Trump to be out there postulating that maybe people should inject bleach as a way of killing the virus or pushing out untested treatments. The entire prism is not what’s best for the country with this president, [it’s] what’s best for him.

Is that in part because his aides and children are unable, or unwilling, to tell him the truth? Or are they living in a bubble of their own creation as well?

One of the points we made during the trial is that you’re not going to change the president’s character. He is who he is. In terms of his family, Jared Kushner was asked about this grim milestone we are crossing where more people are dying of the virus and have died of the virus than died during Vietnam, and his answer was, “We’ve made really good decisions. We’re doing a really good job.” [That] was equally revealing in terms of this whole family’s blind spot.

The most that we can do in Congress is try to mitigate and limit the damage, do vigorous oversight, and insist on accountability. We need to do that in real time.

Do you feel confident that you are getting forthright briefings from the intelligence community?

Well, it grieves me to say that the answer is no, that there has been a tremendous politicization of the intelligence community under Trump.

It has really reached its pinnacle with the appointment of Rick Grenell as the top intel official in the country, someone who has virtually no intelligence experience—he was essentially a Twitter troll. He did what you do to get a high appointment in the Trump administration: You go on Fox, on social media, and make the most incendiary attacks on the president’s opponents and say the most exaggerated claims on behalf of the president.

I think it came as a surprise to most people that inspectors general who were supposed to be this firewall against intergovernmental corruption, or malfeasance of other sorts, could be so easily dismissed by the very people that they are reporting on. Is that something that happened before and what could Congress do to fortify those rules and laws?

Have you found any bipartisan support for such line of thinking thus far?

Given the slave like devotion of particular House Republicans, Kevin McCarthy doesn’t cross the street without asking Donald Trump. That kind of sycophantic, slavish devotion to the president isn’t going to admit of independent reforms.

What kind of accountability can Congress muster now under these circumstances? The oversight committee—what can it do and not do in the immediate future?

There are two kinds of oversight going on in Congress that are going to be very important in real time. Real time oversight is vitally important. There’s a whole host of other issues though—it’s very difficult at a distance to do meaningful oversight when you’re dealing with bodies that don’t particularly want to share the answers. Much of what we will need to know in the intel committee will be classified and therefore we cannot do it at a distance. We certainly don’t have the secure video capability among all of our members around the country right now to be able to conduct such a hearing.

In the meantime, we are doing the kind of oversight that we can by requesting, requiring information by teleconference, by using the budget where necessary to compel answers. For example, an oversight committee looking at the problem with protective gear. They did a bipartisan briefing where administration officials acknowledged that there were shortages of protective gear and tests and that there are shortages in reagents and swabs. It’s less visible to the public, which is a problem, because a very important point of the oversight is getting good information out to the country.

When you talked to my colleague David Corn during the impeachment hearings, you were shocked that it was quite obvious that when you started making your arguments to the Senate, that they hadn’t watched the house hearing, and not just hadn’t watched the full of them, but seemed to have it all kind of mediated through Fox. Do you feel that that’s going on with this crisis?

House Republicans have become such a cult of the president that they’re not even capable of acknowledging the facts staring them in the face. We had to operate from the premise, which turned out to be all too accurate, that the senators were really not watching the hearings in the House. They were getting the topline from Fox, which was completely misleading.

Have you seen any conciliatory movement within the California delegation when it comes to the pandemic? Kevin McCarthy, Devin Nunes—do the two of them, and you, and Barbara Lee and Maxine Waters ever come to any agreement about what needs to proceed in terms of representing the state of California?

I will say it’s been one of the biggest disappointments I’ve had of the Trump administration, and that is, I had a much higher view of my Republican colleagues of their commitment to their own ideals, of their commitment to the constitution. They don’t represent the Republican party anymore. They represent a cult of personality of the president. And so, I do think when the president is gone, I have to hope that they will return to being Republican once again.

COVID’s taken every inequity in our society and magnified it and increased it. What of any old fights may have a chance of being viewed in a new way by both members of Congress and more conservative constituents?

One thing I will say about what we ought to do right now—I was struck at the approach that European countries were taking, but also Asian countries. Where the government was guaranteeing payroll for businesses, large and small.

That seemed to me much more equitable, much more efficient. You didn’t need a separate program for small business and one for large industry. You didn’t need to overwhelm unemployment compensation. You didn’t need to have so many people unemployed. And when this virus does pass, then who have to now go and find employment because people got to retain the jobs they had, even if they couldn’t perform the work right now. That kind of a payroll guarantee is the best approach.

Do you think it’s via payroll or is it a UBI, a universal basic income, kind of start it up now, let’s become Alaska?

Those are two good models for us to explore. I’ve been particularly attracted to the payroll model because it has the effect of preserving employment. They’re not also mutually exclusive. The stimulus checks are a form of universal basic income if you made them monthly. But I particularly think that the payroll guarantee is the right approach. America has made a choice to have millions and millions of its people now going to unemployment rolls.

Do you think election protection will be a part of the next stimulus bill?

So if the Republicans are determined to disenfranchise people, it ought to be abundantly clear what they’re doing so that they can be held accountable at the polls.