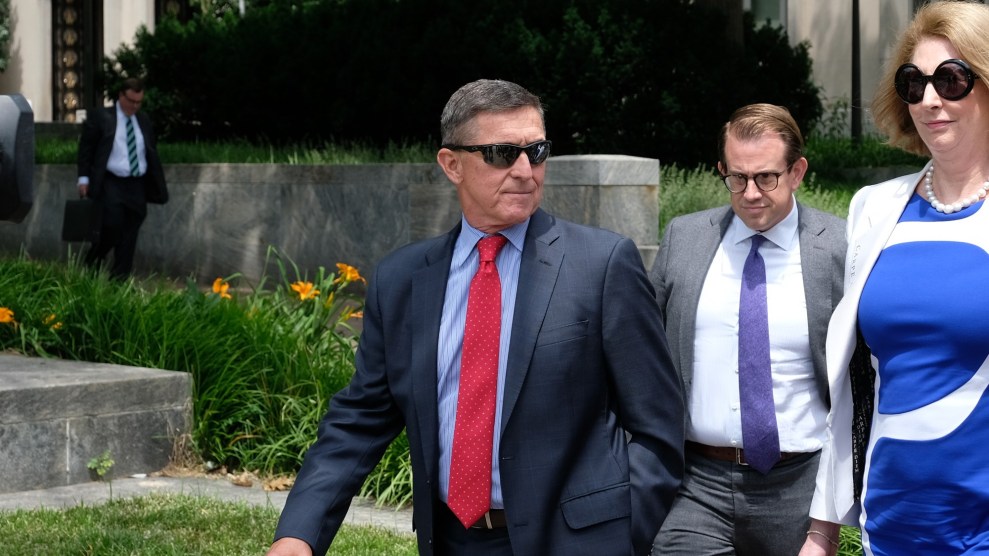 The Justice Department has moved to drop its criminal case against former national security adviser Michael Flynn, who pled guilty in late 2017 to lying to the FBI.

The remarkable move follows sustained public pressure from President Donald Trump, who claimed Flynn was unfairly targeted for political purposes, and behind-the-scenes efforts at the Justice Department by Attorney General William Barr, who commissioned an outside review of the case and put pressure on Flynn’s prosecutors.

In a court filing Thursday, US Attorney for the District of Columbia Timothy Shea, who has taken over the case, argued that Flynn’s lies were not “material” to any investigation, a standard legally required for prosecution. “Because the Government does not have a substantial federal interest in penalizing a defendant for a crime that it is not satisfied occurred, and that it does not believe it can prove beyond a reasonable doubt, the Government now moves to dismiss the criminal information,” Shea wrote.

The decision to drop the Flynn case, which must still be approved by US District Court Judge Emmet Sullivan, appears to be the latest instance of Barr exerting pressure within DOJ to undermine frontline prosecutors who have advanced cases embarrassing to the president. In February, Barr forced prosecutors to lower a sentencing recommendation for Roger Stone, a longtime Trump adviser, just hours after Trump complained in an early morning tweet that Stone’s original sentence suggested by prosecutors was too harsh. Following that intervention, prosecutors who brought the Stone case forward withdrew in protest.

In February, pressure from Barr also appears to have caused Flynn prosecutors to lower a sentencing recommendation in his case. The lead prosecutor in Flynn’s case, Brandon Van Grack, a former member of Special Counsel Robert Mueller’s team, withdrew from the case Thursday, shortly before the Justice Department announced it was dropping charges. Van Grack remains head of DOJ’s Foreign Agents Registration Act Unit, which regulates for foreign interests in the United States.

Flynn pled guilty to lying to the FBI about his illicit Russian contacts.

His lies do not now become truths.

This dismissal does not exonerate him.

But it does incriminate Bill Barr.

In the worst politicization of the Justice Department in its history.

In a statement, Citizens for Responsibility and Ethics in Washington, a liberal watchdog group, said Barr “has consistently acted for the personal and political benefit of President Trump.” The group said it is “deeply skeptical that this is anything other than a further capturing of our criminal justice system for the benefit of the president. The president doesn’t need to issue pardons to his cronies when his attorney general appears willing to terminate their cases before justice can be served.”

Flynn, an Army lieutenant general, served as head of Defense Intelligence Agency under President Obama but was forced out of the post in 2014 amid complaints about his management and erratic behavior. During the presidential campaign in 2016, Flynn became an ardent Trump backer. In November 2016, Flynn was revealed to have secretly agreed to lobby for Turkey while advising Trump. The newly elected president picked Flynn as his National Security Adviser anyway.

Flynn quickly faced additional problem when he was caught secretly conferring about US sanctions on Russia with the Kremlin’s ambassador, Sergey Kislyak, during the presidential transition period. Questioned in January 2017 by the FBI about these conversations, Flynn denied discussing sanctions, a claim he later admitted was a lie. Flynn resigned as National Security Adviser on February 13, after just weeks on the job.

In November 2017, Flynn pleaded guilty to making false statements to the FBI and agreed to cooperate with Mueller, becoming the first senior Trump aide to flip. As part of his plea deal, Flynn admitted that he had lied to the FBI about his conversations with Kislyak, and that he also had lied to agents about his efforts to influence foreign diplomats regarding a December 2016 UN resolution condemning Israeli settlement construction. He also admitted that he had lied to the Justice Department in a Foreign Agents Registration Act filing by claiming he was not aware he was lobbying for Turkey.

In June 2019,  Flynn reversed course, replacing the attorney who negotiated his plea deal with Sidney Powell, a Fox News pundit and vociferous critic of the Mueller probe. Powell wrote secretly to Barr, asking that DOJ drop the Flynn case, or short of that, requested “the appointment of new government counsel with no connection to the Special Counsel team of attorneys or agents to conduct review of the entire Flynn case.”

Powell filed a slew of motions alleging prosecutorial misconduct. With her encouragement, Flynn began flirting with adherents of the bizarre Q-Anon conspiracy theory. He agreed to speak a Q-Anon conference but withdrew after Mother Jones reported on his plans. In December, Sullivan rejected Powell’s motions in a stinging ruling, even calling her arguments baseless and irrelevant to Flynn’s case. Sullivan accused Powell of plagiarism in her filings.

Powell then shifted tactics. Though she had previously told Sullivan she had no plans to reverse Flynn’s guilty plea, in January she began legal efforts to do just that.

In February, Barr appointed prosecutors in the office of Jeff Jensen, US Attorney in St. Louis, a Trump appointee, along with DOJ prosecutors in Washington, to review Flynn’s case. This review resulted in the government producing new material that Flynn’s backers touted as exculpatory. Last week, prosecutors disclosed in court filings handwritten notes that Bill Priestap, then the FBI’s head of counterintelligence, had made before FBI agents interviewed Flynn at the White House in January 2016. Preistap wrote: “What’s our goal? Truth/Admission or to get him to lie, so we can prosecute him or get him fired?” Experienced prosecutors said that the FBI’s tactics with Flynn were not unusual, but Trump and conservative media pundits touted the disclosure as major news that proved Flynn had been railroaded by the FBI. The move to drop the Flynn case suggests that Justice Department leadership thought so too.