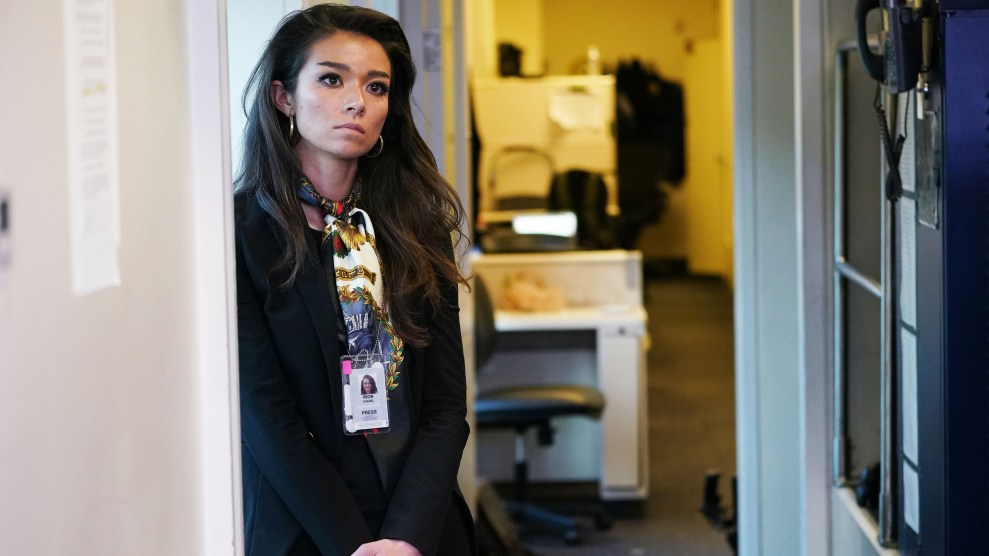 Over the last several weeks, President Trump has repeatedly promoted the conspiracy-mongering One American News Network on his Twitter feed and by regularly calling on its correspondent at White House news events. On Tuesday morning, he did so again by tweeting an unsubstantiated conspiracy that has been pushed by the network, citing its reporting to claim that a 75-year-old man who was knocked over and bloodied by Buffalo police while taking part in a protest after the death of George Floyd may have been “an ANTIFA provocateur” working to disrupt police communications.

Based on what little data is available, the channel could use all the White House support it can get. According to CNN, OAN doesn’t subscribe to industry-standard Nielsen Media Research, but last spring, it went ahead and measured the channel anyway in the country’s largest metropolitan areas. It averaged just 14,000 viewers from April 1, 2019, to June 11, 2019. In that time, Fox News averaged 631,000 viewers; CNN and MSNBC also had averages in the hundreds of thousands. While the network’s owner has said it is available in 35 million American homes, that number represents less than a third of households with television.

Despite its small viewership, Trump has helped OAN gain outsize reach and reputation by endorsing its outrageous reporting and by his multiple assertions that he might prefer the network to Fox News. The channel’s willingness to do stories without a factual basis seems to know no bounds, as long as they make the left look bad and the right, particularly Trumpism, look great. The channel amplifies hoaxes that, before, were usually sitting on the margins of the internet. For example, theories about the global ambitions of liberal megadonor George Soros, Bill Gates, and other wealthy people that the channel has run haven’t appeared anywhere else but on message boards and fringe-right Twitter and Instagram accounts. It’s unclear if the channel has a fact-checking process. If it does, it appears to have no problem citing such sources.

OAN’s willingness to amplify the false and absurd probably comes from its personnel. It’s established a team of on-air personalities who, without the network’s platform, would be hard pressed to do much beyond being tinfoil hat-wearing, internet shit posters. Here’s a look at some of the wildest members of their organization:

THE CREAM OF THE CRAP

Trump’s Tuesday morning tweet about Martin Gugino, the elderly activist manhandled by Buffalo police, referenced a segment reported by Rouz where he posits the incident of “so-called police brutality” may have been a “false flag provocation.”

Rouz went viral last month in the midst of the coronavirus crisis after Media Matters’ Matt Gertz happened to see a segment he created claiming “mounting evidence of a globalist conspiracy” by the Clintons, Soros, Bill Gates, Dr. Anthony Fauci, and the Chinese government, citing a comically high amount of unnamed “reports.” (To be 100 percent clear, no reports indicate this.)

In 2017, also on an entirely false OAN segment, Rouz made up a claim about how Clinton was secretly funding antifa through her political action committee. In another, he repeated the debunked claim that Soros collaborated with Nazis during World War II, when he would have been in his early teens. He also claimed on-air that Soros was funding the Central American migrant caravan that captured the attention of conspiracy theorists in the fall of 2018.

Rouz didn’t just come out of nowhere with viral megahits. He’s been practicing in a well known conspiratorial training ground: Russian propaganda state media. As of 2019, The Daily Beast pointed out that Rouz has been working simultaneously for both OAN and for the Russian state media outlet, Sputnik.

Posobiec may be the channel’s flagship disinformer. The OAN host is notorious for being one of the most prominent pushers of the Pizzagate conspiracy theory; he once conducted a livestream “investigation” of the restaurant where the hoax pedophile ring was said to be occurring, during which he waltzed into a child’s birthday party being held in a back room. Since then, he acts as though he’s been locked in a John Wooden-esque competition with himself to outdo his greatest disinformation achievement.

Some of his most repugnant hits include trying to plant “Rape Melania” signs at an anti-Trump rally, falsely tweeting that Obama Attorney General Loretta Lynch had called for “blood in the streets,” a made-up claim that Star Wars’ Rogue One was being rewritten to include scenes calling Trump racist, and, after Republican congressman Steve Scalise was shot at baseball practice, that Bernie Sanders had told his followers to “take down” Trump. None of rose to Pizzagate levels of fame, but not for lack effort on Posobiec’s part. He has also tweeted in support of a white nationalist conspiracy which holds that immigration and other trends are part of a secret plot to commit white genocide.

Rion, who is the channel’s White House reporter, may be supplanting Posobiec as OAN’s most well-known staff member due to Trump’s recent habit of calling on her during new conferences, where she can be relied upon to ask questions whose thrust is either helpful to the president or damaging to his opponents. Another unhinged conspiracy theorist, she has peddled theories including Pizzagate, that the Clinton’s were responsible for Seth Rich’s murder, anti-semitic tropes about liberal financier George Soros, and conspiracies about Joe Biden’s dealings in Ukraine.

During the coronavirus, CNN reports that Rion jeopardized the health of other journalists by flouting White House Press Briefing social distancing guidelines. After being kicked out of briefings for this, she tried, unsuccessfully, to bring her own chair into the briefing room.

Rion’s bio boasts that before she came to OAN, she worked as a volunteer on Trump’s 2016 campaign and spent time “producing illustrations for President Trump and family.”

Robert Herring Sr. founded OAN in 2013 with money he made in the circuit board industry. While Herring has not personally used OAN airtime to undertake overt and aggressive conspiracy-mongering, he owns a network that has hired a bunch of people that do. On Twitter, Herring boosts his own suspect theories (he’s been really into hydroxychloroquine as a coronavirus cure, which doctors are not yet confident in). According to the Washington Post, Herring banned polls that didn’t show Trump in first place during his last election.

Sharp doesn’t have the same hoax spreading bonafides as some of his colleagues but has at least made himself, in propaganda parlance, a “useful idiot,” which counts for something.

In a May 2019 OAN story, Sharp cited a report from the Foundation for the Study of Democracy to claim that the White Helmets, an internationally lauded volunteer search and rescue team in Syria, had been faking chemical attacks in the country. What Sharp was either ignorant of or did not share, is that the Foundation for the Study of Democracy is a Russian government front.

Like his co-workers, he’s also attacked Soros by reporting that protests against then-Supreme Court nominee Brett Kavanaugh by activists from groups that he’s funded “aren’t what they seem to be.”

Emerald Robinson no longer works at OAN. She’s now at Newsmax, but in her time at the San Diego-based television outlet, she became one of the channel’s few anchors to be praised by the white nationalist website, VDare.

It’s unclear exactly what about Robinson resonated with the outlet, but a now-deleted Islamaphobic tweet in which she called Rep. Ilhan Omar (D-Minn.) an “al-Qaeda supporting Somali Gangster” and “Islamist terrorist supporter” offers a sense.

High-profile conspiracy theorist Jerome Corsi doesn’t work at OAN, but he’s too prominent not to mention. Corsi, who was a subject of Robert Mueller’s investigation into Russian interference in the 2016 election, has gone on the channel to erroneously talk about how “Soros & Bidens Are Globalist Puppet Masters Behind Ukraine.”

Off the network, Corsi has spread hoaxes about the Clinton’s killing of DNC staffer Seth Rich, even though he knew it wasn’t true. The hoax has subjected Rich’s already grieving family to tremendous agony and pain.