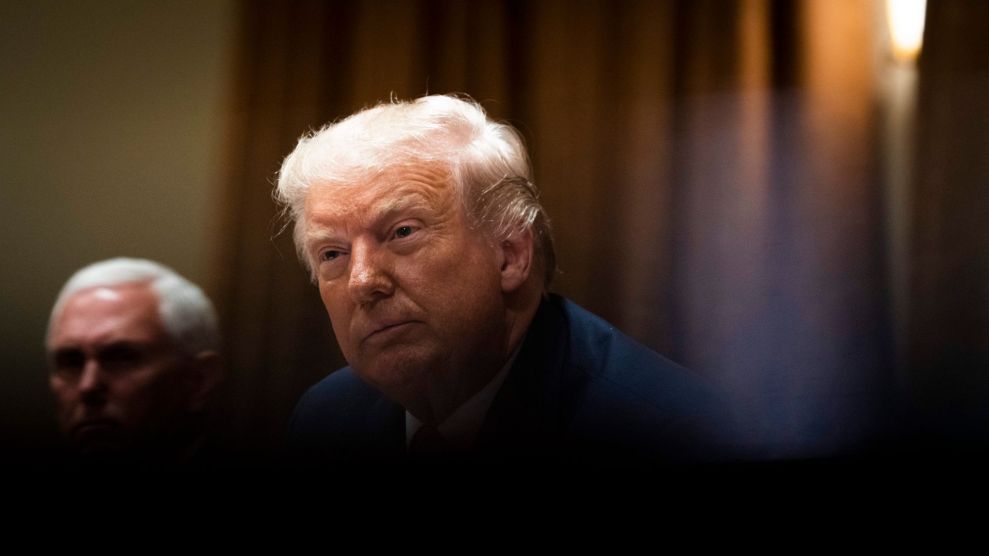 If the current numbers hold, sometime in mid- to late-September, the United States will likely reach the horrific marker of 200,000 people dead due to the coronavirus crisis. No doubt, the media will widely report on this artificial but significant milepost. If, tragically, the trend ticks up slightly after some schools reopen in late summer and after flu season begins in October, this grim headline could appear shortly before Election Day: “COVID-19 Death Count in the US Tops a Quarter of a Million.” One puzzle is why President Donald Trump does not seem to realize that these nightmarish statistics—and the news stories they will generate—could spell doom for his reelection prospects.

By now it’s damn clear that Trump is a narcissistic sociopath who cannot express an ounce of regret over the deaths caused by the virus. He has boasted about the swell TV ratings of his pandemic briefings; he has said almost nothing of those Americans killed by the pandemic. “It is what it is,” he nonchalantly and ghastly observed the other day. Since the start of this epidemic, Trump has gushed out a series of idiotic and false remarks: The virus is no big deal. It will go away. This is a hoax. We will have a national testing program within days. We will have a vaccine within months. Try hydroxychloroquine. Maybe injecting bleach will help. Case numbers are high because of testing. I take no responsibility. I’ve been right all along. We’ve done an amazing job.

He has pushed to reopen state economies and schools before guideposts established by US government experts were met. He has politicized and, thus, discouraged the most basic practice to arrest the pandemic: wearing masks. Imagine being able to prevent tens of thousands of deaths of your fellow Americans with one easy action—and not taking that step. Ladies and gentlemen, I give you the president of the United States. In recent days, yes, Trump has begrudgingly shifted his stance on masks. His campaign sent out an email to supporters telling them that it is “patriotic” to wear a mask. Yet during his latest White House briefings, when he reads his opening statement that includes encouraging the use of masks, Trump hurries his way through this one line and hardly highlights the point. It’s as if he is swallowing a bitter pill. And this reluctant about-face may have come too late to persuade his live-maskless-or-die followers. The damage has been done.

Trump’s self-obsessed behavior, his dismissal of expert advice, his attacks on news media outlets that report the awful truths of the pandemic, his focus on the positive economic indicators that exist within an economic calamity (look at the Dow Jones!)—none of this is shocking. But what is surprising is that Trump, perhaps the most self-interested man ever to reside in the White House, cannot see that his own and much-cherished personal interests—notably, getting re-elected—are aligned with the public interest of curtailing the pandemic.

Do Trump and his campaign minions believe that he can be reelected as the number of COVID deaths top 200,000 or 250,000? Shouldn’t he be doing whatever he can to prevent these headlines in the final weeks of the campaign? What the hell gives?

The responsible course for the president was not tough to discern. Follow the recommendations of public health experts. Model the appropriate conduct. (Wear a mask!) Assist front-line medical workers. Seek to help the economically dislocated. Mourn the dead and address the national fear and anxiety. Yet Trump’s own inner compass is so broken that he could not even fake concern for his own political benefit. His deep-rooted pathologies—I know best, I can bullshit through anything—blocked him from adopting simple measures that would actually advance his own personal agenda.

One small example: In the early weeks of the pandemic, Trump picked a fight with Michigan Gov. Gretchen Whitmer, a Democrat. She is a popular pol in the Wolverine State. She was elected 53 to 43 percent in 2018. And she was doing a good job responding to the crisis. Michigan is (or, now, maybe was) a key state for Trump. It was part of his “beautiful” electoral map in 2016, and he could well need it again to win. Yet he appeared more eager to feud with Whitmer than to help the state acquire equipment it needed to combat the coronavirus. “Don’t call the woman in Michigan,” Trump said he told Vice President Mike Pence. Why piss off Michiganders when you desire their votes? It’s in Trump’s nature. (See the story of the scorpion and the frog.) He placed his love of revenge over his own political survival.

Consider Trump’s treatment of Dr. Anthony Fauci. This highly esteemed scientist is much-respected by the public. About two-thirds of Americans trust what he says about the pandemic. (Only 30 percent have confidence in what Trump utters about the crisis.) Trump was fortunate to have Fauci on the White House coronavirus task force. He should be riding the Fauci wave. Instead, the Trump White House has been backstabbing—and front-stabbing—this acclaimed public servant. Recently, Trump whined about Fauci’s high-approval ratings and complained, “Nobody likes me.” He declared that Fauci’s analysis about the ongoing coronavirus surge is “wrong.” (Trump also turned on Dr. Deborah Birx, the ever-loyal coordinator of the White House coronavirus task force, tweeting “Pathetic!” at her.)

Trump has the LeBron James of public health on his team, and he only wants to dump on him. That’s not a winning strategy.

Neither was Trump’s me-first insistence on holding me-me-me political rallies while the virus wildfire raged. Herman Cain—the co-chair of the president’s Black Voices for Trump outfit—sadly died of COVID-19 weeks after attending that indoor rally in Tulsa, where he and thousands of others sat shoulder-to-shoulder and, emulating Trump, did not wear masks. It’s unclear when and where Cain contracted the virus, but the episode suggests a basic lesson: Insisting on a premature return to normal can yield deadly results and cause serious political embarrassment. Yet for Trump, there are no teachable moments.

Trump cannot stop himself from lying. (Last month, the Washington Post‘s database of Trump’s false statements hit the 20,000 mark.) Trump cannot stop himself from self-aggrandizing. (Trump at the Centers for Disease Control in March: “Every one of these doctors said, ‘How do you know so much about this?’ Maybe I have a natural ability.”) Trump cannot throttle back on his racism (“the China virus”), his ignorance (“supposing you brought the light inside the body”), or his egotism (“we had a lot of people watching, record numbers watching…in the history of cable television, there’s never been anything like it”). But the former reality TV celebrity, who became famous by exploiting the tabloid press, does know a thing or two about PR. So is it that difficult for him to comprehend that this continuing march of death threatens the only thing he cares about: his own standing? Grasping this simple notion should compel him to take immediate and extensive action to limit the number of lives lost to this killer virus—not for the good of others, but for his own sake.

Yet Trump’s demons are in control. He is fueled by spite and by self-glory. Moreover, he appears incapable of peering into the future and considering the effects of his statements and actions. Last month, Trump publicly vowed that he would sign and enact a comprehensive health care plan within two weeks. The fortnight came and went; there was nothing. This was yet one more sign that Trump is 100-percent situational. He says whatever he thinks he needs to say at the moment to gain whatever advantage he seeks, without an iota of regard for later being held accountable. It sure sounds swell to promise everyone a signed, sealed, and delivered health care package within 14 days. Why not say that? So what if there is no new national health care program in two weeks? Trump will deal with that then. Or not. It doesn’t matter to him. Neither present truth nor future consequences hold much reality for him.

Perhaps this explains Trump’s inability to fully fathom the threat he faces. The appalling body count of the present doesn’t move him toward empathy or effective policy, and the prospect of hideous headlines to come also doesn’t motivate him. Not even when his own political career is in jeopardy. Maybe he figures that he will BS his way through all this or rig the system somehow to retain power. Or that he will just get dumb-lucky via an external incident (a vaccine!) that changes the now-dark landscape. But Trump’s inability to make a simple calculation—I should heed the experts and implement the counter-pandemic fundamentals to save lives and (also!) win reelection—is stark and disturbing. It shows Trump cannot perceive or escape the vortex of his own self-destruction. The immense tragedy is that thousands of Americans have died and will continue to die because Trump cannot help even himself.