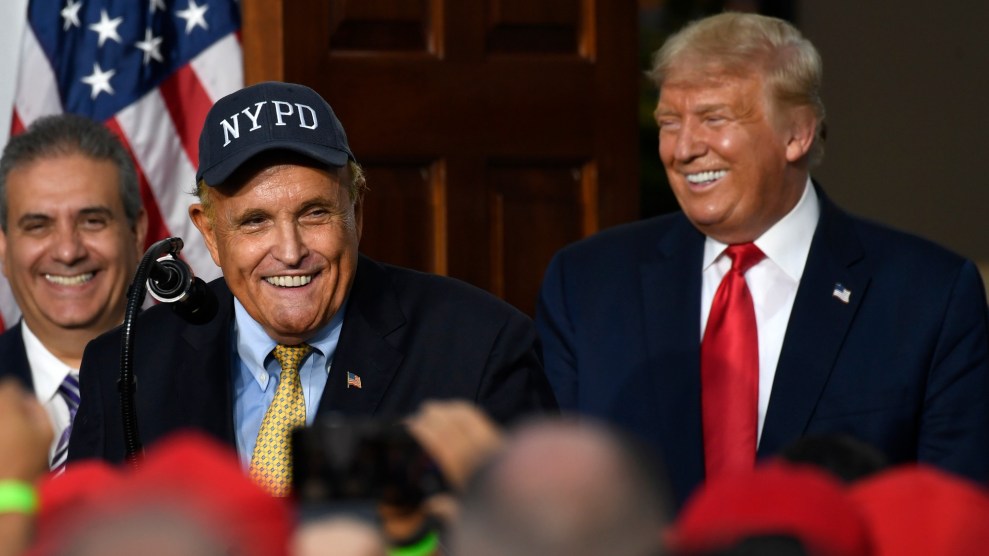 Rudy Giuliani and President Donald Trump on Aug. 14 at an event at Trump's golf club in Bedminster, N.J.Susan Walsh/AP

A Ukrainian parliamentarian who has supplied Rudy Giuliani with information intended to smear Joe Biden has been “an active Russian agent for over a decade,” according to the US Treasury Department. On Thursday, Treasury’s Office of Foreign Assets Control placed the official, Andriy Derkach, on a list of “Russia-linked election interference actors” and slapped him with financial sanctions.

“Derkach, a Member of the Ukrainian Parliament, has been an active Russian agent for over a decade, maintaining close connections with the Russian Intelligence Services,” the department said in an announcement. “Derkach has directly or indirectly engaged in, sponsored, concealed, or otherwise been complicit in foreign interference in an attempt to undermine the upcoming 2020 US presidential election.”

Treasury did not say where its information on Derkach comes from, but it is likely based on US intelligence findings. The Office of the Director of National Intelligence recently told Congress that Derkach is “spreading claims about corruption” as part of a Russian effort to undermine Biden’s campaign.

“Derkach and other Russian agents employ manipulation and deceit to attempt to influence elections in the United States and elsewhere around the world,” Treasury Secretary Steven Mnuchin said in statement Thursday.

Along with Derkach, Treasury sanctioned three Russians it says are employed by Russia’s Internet Research Agency, a so-called troll-factory that took part in interference in the 2016 presidential election. The department says the IRA remains engaged in “malign influence operations around the world.”

Late last year—shortly before the House impeached Trump over his efforts to pressure Ukraine to help smear Biden—Giuliani traveled to Ukraine. During that trip, Giuliani met with Derkach and other Ukrainians who pushed baseless allegations that Biden had acted improperly in 2016 when, as vice president, he had joined an international push for the removal of Ukraine’s top prosecutor, Viktor Shokin, who was suspected of corruption.

Derkach held press conferences attacking former US Ambassador to Ukraine Marie Yovanovitch, whose May 2019 ouster Giuliani helped to engineer. Beginning in May 2020, Derkach also held press conferences in Kiev during which he played a series of secretly recorded tapes of Biden speaking by phone with former Ukrainian President Petro Poroshenko. The tapes did not reveal wrongdoing by Biden, but Derkach asserted that they bolstered Trump’s and Giuliani’s allegations about Biden.

Ukrainians critical of Russia have theorized that the tapes were made by Russian intelligence. Derkach—who is the son of a former KGB officer and who attended a college in Moscow known for training spies—has denied this.

Giuliani told the Washington Post this summer that he remained in touch with Derkach after his December trip, calling the Ukrainian “very helpful.” Giuliani acknowledged that he and Derkach have spoken about Ukraine many times, according to the Post. Giuliani did not respond to requests for comment Thursday.

In a statement Thursday to BuzzFeed News, Derkach claimed Treasury sanctioned him as “revenge” by Biden’s “deep state associates” and to preempt a new press conference he says he plans to hold early next week to reveal supposed corruption by Democrats.

The New York Times and Politico have reported that Democrats, in a classified portion of a July letter to FBI Director Christopher Wray, alleged that Derkach is part of an effort to launder Russian disinformation through a US Senate investigation overseen by Ron Johnson (R-Wis.) into Biden and Ukraine. Derkach has also reportedly sent information related to Biden to other congressional Republicans including Judiciary Chairman Chuck Grassley (R-Iowa). Johnson and Grassley have said they did not receive material from Derkach.

“Foreign election meddling in all of its forms from any corner of the globe cannot be tolerated,” Johnson and Grassley said in a joint statement Thursday. “We commend the Trump Administration for holding accountable perpetrators of foreign interference, and hope our Democratic colleagues in Congress will finally stop relying on disinformation from the likes of Andriy Derkach to smear their political rivals.”