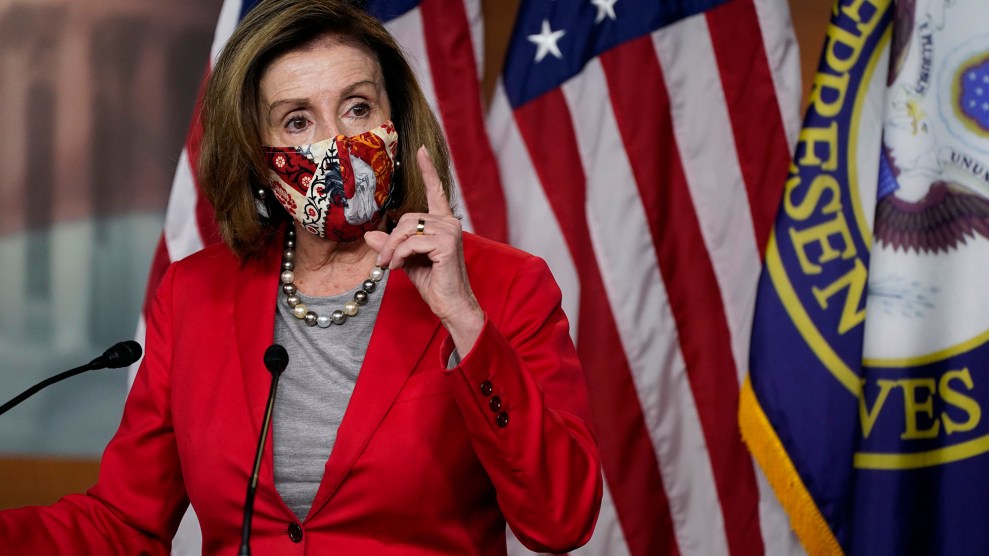 Nancy Pelosi (D-Calif.) narrowly dodged her toughest test yet to remain House speaker, after she won a vote Sunday by a razor-thin margin with 216 votes, beating California Republican Kevin McCarthy, who received 209.

Pelosi faced uniques circumstances in her bid for speakership of the 117th Congress. Democrats held their slimmest lead ever during the past 20 years when they were in the majority, and Pelosi had to deal with new insurgency from within her own party, with more progressive members saying that she needed to be replaced.

Pelosi hadn’t faced much resistance from Democrats during her first and second terms as speaker, but things changed in 2018 when 15 Democrats voted against her. She ran unopposed by a Democratic challenger this time, but the coronavirus posed new hurdles that almost kept several members from being able to show up to vote. Three lawmakers in quarantine were able to vote behind enclosed plexiglass and, according to CBS, other coronavirus safety measures were introduced, including enhanced ventilation and strict limits on the number of lawmakers allowed on the floor at any given time. Even so, three Democrats abstained, while Tammy Duckworth (D-Illinois) and New York Rep. Hakim Jeffries each received one vote.

Members of the House broke into applause after her reelection was announced.

BREAKING: The floor of the House of Representatives erupts in applause as Rep. Nancy Pelosi is reelected as speaker of the House for the 117th congress, with 216 votes. https://t.co/XA4lnhkLkp pic.twitter.com/dPVrOdBVgI

Rep. Gwen Moore (D-Wisc.) who just disclosed her coronavirus infection last week, attended the vote, to the consternation of Republicans who questioned if she had isolated for enough time. Moore told reporters that she hadn’t tested negative yet, but had followed guidelines to isolate for two weeks in accordance with a doctors’ orders.

Moore is not one of three lawmakers using special plexiglass enclosure to vote.

But her attendance has outraged Republicans, who question length of her quarantine and whether it's truly safe for her to be there. https://t.co/d753kFXiZh

Prior to the vote, the House held a moment of silence honoring Luke Letlow, the representative-elect from Louisiana who died of the coronavirus last week.

Other Republicans appeared to have no issues with coronavirus considerations. Two Republicans including vocal QAnon supporter Rep. Marjorie Taylor Greene (Georgia) appeared on the floor without masks, before they were told to leave, inciting a yelling match.

Now, the Republiacn and Democratic floor staff are in a screaming match on the floor.

So this Congress is going great already

Notably Alexandria Ocasio-Cortez and members of the group of progressive lawmakers in “The Squad,” who have been critical of Pelosi, voted for her on Sunday. Ocasio-Cortez had told the Intercept earlier in December that the longtime Democratic speaker needed to be replaced but acknowledged that no clear replacement was obvious.

This will be Pelosi’s fourth term as House speaker.

“I am enormously grateful for the trust that Members have placed in me,” Pelosi wrote to fellow Democratic lawmakers on Sunday, in a letter provided to CNN. “I am confident that the Speaker’s election today will show a united Democratic Caucus ready to meet the challenges ahead, and that we are prepared to set our country on a new course, starting with the Electoral College meeting on Wednesday.”