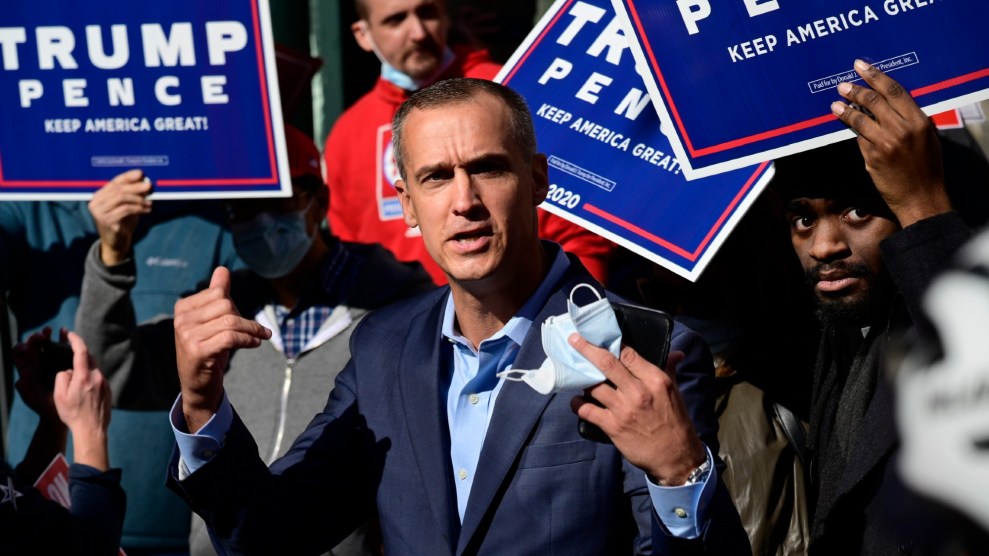 Turnberry Solutions, a lobbying firm notable for aggressively advertising ties to former President Donald Trump, is no more. The firm, named for a Trump-owned golf resort in Scotland, becomes the latest shop linked to the former president to trim its sails or close its doors in the wake of Democrats’ takeover of the White House and Congress.

Corey Lewandowski, who was closely associated with the firm and served as a strategic adviser, is departing, and the remaining organization will work under a new name, Jason Osborne, a 2016 Trump campaign veteran who co-founded the company in 2017, told Mother Jones Monday.

“After the results of the election, with a new Congress coming in, Corey and I made the decision that he was going to focus more on political work, and I am continuing to focus on lobbying, which is what I’ve done for 25 years,” Osborne said.

Osborne said he expects to retain most of Turnberry’s lobbying clients at his renamed firm, Connect Strategy. He said he plans to switch the lobbying registrations for those clients this week. One prominent client, T-Mobile, which hired Turnberry in 2018 with help from Lewandowski while seeking Trump administration approval for a proposed takeover of Sprint, will not be represented by Connect Strategy, however, Osborne said.

Lewandowski did not respond to a request for comment.

Osborne and Mike Rubino, both veterans of Trump’s 2016 campaign, launched Turnberry in 2017, out of a Capitol Hill townhouse where Lewandowski lived. For almost two years, Lewandowski disputed any links to the firm, but in February 2019, he joined it as a strategic adviser. Former Rep. Ryan Zinke (R-Mont.), who stepped down as Trump’s first interior secretary amid investigations into matters including a Montana land deal between a foundation he created and energy services company Halliburton, joined the firm at the same time as Lewandowski.

In 2021, the firm has filed forms announcing the termination of its representation of four of its 16 lobbying clients.

Still, Osborne said that he had avoided relying solely on perceived access to Trump for business and prepared for the prospect of a Joe Biden presidency. He said he not only lobbies but also conducts international business development and other consulting work for clients.

“The name Turnberry no longer fit what I was doing,” he said. “I wanted to rebrand.”

Ballard Partners, which launched a DC office in late 2016 and capitalized on its founder’s history with Trump to quickly become one of Washington’s top lobbying firms, is prepared for its growth spurt to end, Brian Ballard told the Hill recently. “We had a wonderful run,” he said. “We’re going to be here to stay, but it’s not going to be the same.”