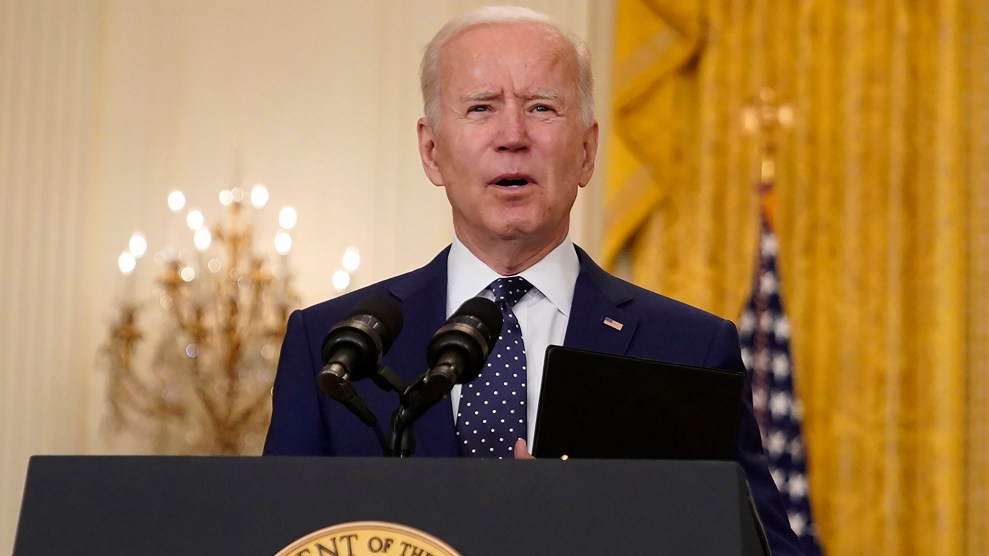 With the 100-day mark of Joe Biden’s presidency approaching, a number of national news organizations commissioned polls on how he’s doing, and they all found basically the same thing: The president is popular. Biden’s approval rating is at 58 percent according to CBS News, 53 percent according to NBC News, 52 percent according to ABC News, and 54 percent according to Fox News. This is a bit lower than where Presidents Barack Obama and George W. Bush were at the same point in time, but given the circumstances in which he took office—a refusal by Biden’s predecessor to concede that culminated in an actual rebellion—it’s a pretty good number.

Republicans seem to have taken notice. Last weekend, the Hill interviewed a number of GOP senators who fretted about how Biden’s amiable personality had insulated him from political blowback—they were having a hard time defining him as the enemy.

South Dakota Sen. John Thune typified these laments, telling the paper, “His tone is moderate and he’s an affable person, he’s a likeable individual and a lot of us know him, have relationships with him and it’s probably harder to attack somebody who is relatable and likeable.”

Of course, Obama was also, to use Thune’s words, relatable and likeable, and that never stopped conservatives from finding grievances to latch onto. As Adam Serwer noted in the Atlantic last year, one of the defining themes of Biden’s 2020 race was how badly Republicans struggled to adapt their playbook for a campaign against an old white man, after years of deploying racist and sexist tropes to stir up opposition to Obama and Hillary Clinton. They could try to label Biden as “radical,” but “the notion of a Biden presidency simply does not provoke the visceral rage that Clinton and Obama did—not in Trump, and not in his supporters,” Serwer wrote. Case in point: While Republicans have tried to portray Biden as a big-spending liberal, the most common criticisms of Biden in NBC News’ poll were just that he was old.

— a majority believe the U.S. is on the wrong track

— a whopping 80% still think the U.S. is mostly divided, despite Biden’s promise to be a more unifying president. https://t.co/2X1GYek6lA pic.twitter.com/Mr04YtS7Tg

It’s hard to say whether so much of conservatives’ anger and criticism has been focused on cultural politics like Dr. Seuss because they can’t get anything to stick to Biden, or if they can’t get any of their attacks on Biden to stick because they’re too focused on Dr. Seuss. But for now, with one $2 trillion stimulus already on the books and a major infrastructure bill currently in process, either scenario works out just fine for the president.