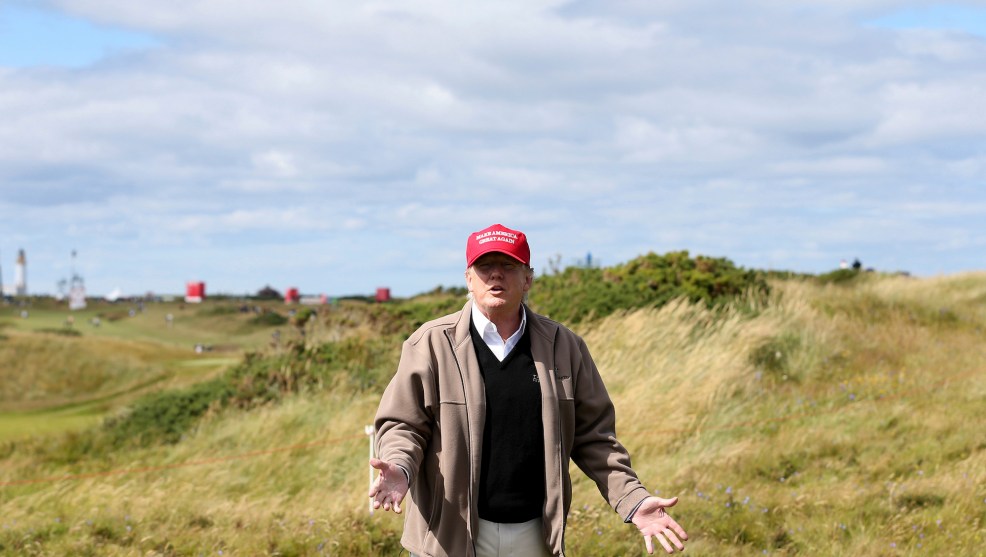 Donald Trump at the Turnberry golf course in ScotlandScott Heppell/AP

A Scottish court on Wednesday gave activists the green light to continue their effort to use an anti–money laundering statute to investigate the financing of Donald Trump’s golf courses in the country.

While Trump built his reputation in New York City real estate, the gravitational center of his business empire has shifted toward Scotland in the last decade, with the two courses he operates there requiring huge amounts of cash to build and maintain. By some estimates, Trump would have had to spend half of his available cash to finance his 2014 purchase of the famed Turnberry golf course in southwest Scotland. According to Trump himself, he has spent more than $400 million on Turnberry and a second course in Aberdeenshire, along the windy North Sea coast, which he built from scratch. Neither course has ever turned a profit. In fact, both courses bleed money.

The amount of money Trump has dumped—and continues to dump—into the courses has raised suspicions about these ventures. The numbers simply don’t add up—it’s an extraordinary amount of cash that Trump would have had to struggle to scrape together, spent on a business that doesn’t seem to be paying off. Mysteriously, Trump has pumped money into these properties through ongoing loans—loans to himself, with no due date and no interest charged. Financial experts interviewed by Mother Jones say it’s hard to come up with a rationale, legal or not, for Trump’s Scottish dealings.

In the United Kingdom, government investigators have the power to find out where the money to buy and develop Trump’s courses came from, using something called an Unexplained Wealth Order—essentially a mandate to peer into a particular person’s finances if there are reasonable suspicions something isn’t quite right. It can’t be wielded against just anyone; it’s designed to make inquiries into the finances of “politically exposed persons” suspected of money laundering. It has been invoked several times in London, including to examine how the wife of a jailed ex–Azerbaijani government official had managed to afford a 16 million-pound shopping spree at Harrods. In February 2020, lawmakers from the Scottish Green Party began agitating for the Scottish government to invoke a UWO against Trump. The movement didn’t gain much steam until after he left office and Patrick Harvie, the Greens’ co-leader in the Scottish Parliament, pushed a vote on the matter. Harvie cited a report from transparency advocacy group Avaaz that detailed Trump’s ties to people accused of financial improprieties—such as his former campaign manager Paul Manafort, who was convicted of money laundering—and the questions surrounding the financing of his money-losing courses.

“This is not someone who inspires confidence in sound finances and sound business,” Harvie told Mother Jones last year. “The fact that there are many allegations floating around that the US authorities have investigated, whether it’s in relation to Russia or his political dealings domestically—you don’t have to sniff the air very long to see there’s something that smells.”

Trump has a long, fraught relationship with the Scottish government. When he first decided to invest in Scotland in 2006, he was wooed by then–First Minister Alex Salmond, who helped override local objections to Trump’s construction plans. But the relationship soured. Now, Trump regularly rails against Scottish lawmakers, including current First Minister Nicola Sturgeon. While Sturgeon and her top ministers are hardly Trump fans, Sturgeon’s ruling Scottish National Party squashed Harvie’s request, with their justice minister arguing that, as deplorable as he personally found Trump, it should be investigators, not lawmakers, who make the decision on who should be investigated. And, he said, he couldn’t confirm or deny if Trump was being investigated.

That answer didn’t satisfy Harvie or Avaaz, and the NGO went on to file a legal petition demanding that a UWO be considered by the Scottish courts. Wednesday morning, a Scottish judge gave Avaaz permission to move forward with its effort to force a UWO. To be clear, the decision does not mean Trump has to open his books just yet. But it does grant Avaaz a court hearing later this year in which the group can argue in more detail why a UWO should be invoked against Trump, and Sturgeon’s government will have to explain why they don’t want to get involved.