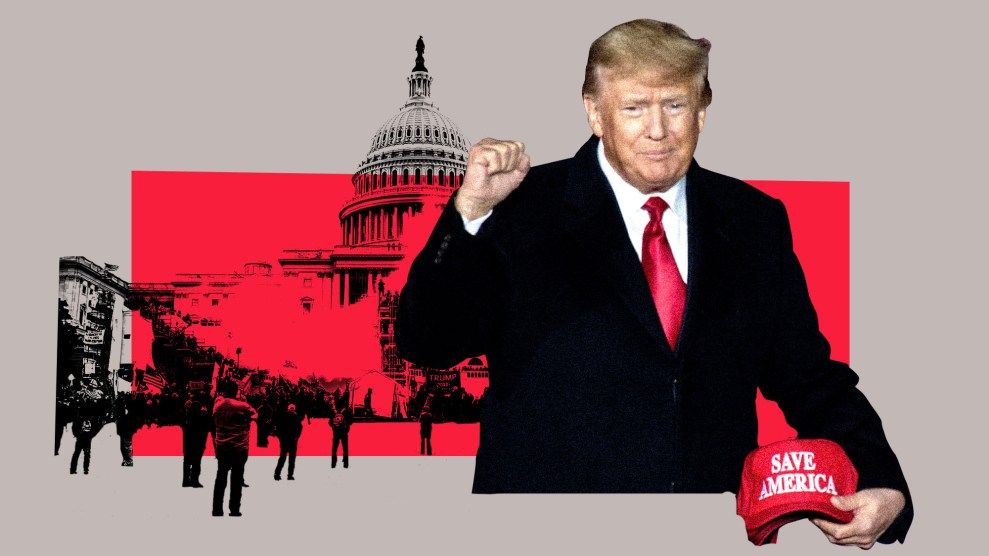 During a speech at a rally in Texas on Saturday, Donald Trump further escalated his efforts to whitewash the horrific assault on the US Capitol that took place just over a year ago. As he floated another run for president in 2024, Trump suggested to a crowd of supporters that the more than 700 people charged so far in connection with the siege of Congress on January 6, 2021, are being wrongly penalized and could be pardoned by him for their crimes.

“If I run and if I win, we will treat those people from January 6 fairly,” Trump said. “We will treat them fairly. And if it requires pardons, we will give them pardons. Because they are being treated so unfairly.”

Trump’s comments were the latest in an ongoing campaign to deceive the American public about the violent attack on Congress by thousands of his supporters, who bought Trump’s lie that the 2020 election was stolen through fraud and sought to stop Congress from certifying Joe Biden as president.

In recent months, Trump has gone beyond just depicting the events of January 6 as a “lovefest” and trying to cover up the fact that many insurrectionists who targeted the Capitol were heavily armed. As I’ve reported since last fall, the ex-president has been spearheading an active disinformation campaign that seeks to completely rewrite the reality of what happened that harrowing day. In a series of statements posted online and in comments during TV appearances and at political events, Trump has falsely claimed that the “real” insurrection was the 2020 election itself, and that January 6 was a patriotic “protest” against that nefarious alternate history. “I reverse it,” he says. “The insurrection took place on November 3rd, that was Election Day.”

The vicious attacks by Trump supporters on scores of police officers, the millions in damage to the Capitol Building, the handful of deaths that day, the subsequent suicides of police officers who defended Congress—none of that ever happened, according to Trump’s narrative. Instead, at Saturday’s rally he called the prosecution of people who attacked the Capitol “a disgrace.”

The danger of Trump’s push to erase a grim chapter in American history lies not only with complicit Republican leaders and support for his false narrative from a majority of Republican voters, some of whom have even agreed that the use of political violence may be necessary for “saving” the country. The peril also lies with what Trump signaled he would continue to do to incite his base. Reminiscent of how he infamously told the violent far-right Proud Boys to “stand back and stand by” during the homestretch of the 2020 election, Trump also suggested on Saturday that his supporters should be prepared to take action against investigations currently targeting him in New York and elsewhere.

“If these radical, vicious, racist prosecutors do anything wrong or illegal,” he said, “I hope we are going to have in this country the biggest protest we have ever had, in Washington DC, in New York, in Atlanta and elsewhere, because our country and our elections are corrupt.”

“These prosecutors are vicious, horrible people,” Trump also said. “They’re racists and they’re very sick—they’re mentally sick. They’re going after me without any protection of my rights from the Supreme Court or most other courts. In reality, they’re not after me, they’re after you.”

In early January, the Department of Homeland security warned that the threat from domestic far-right extremists remained serious. A prime source of that danger, according to Homeland Security Secretary Alejandro Mayorkas, was “a false narrative that the 2020 presidential election was stolen.” In the weeks since, more evidence has surfaced in court documents showing that far-right extremists continue to heed Trump’s rhetoric, including from an Oath Keeper member charged for alleged participation in an armed seditious conspiracy targeting Congress.