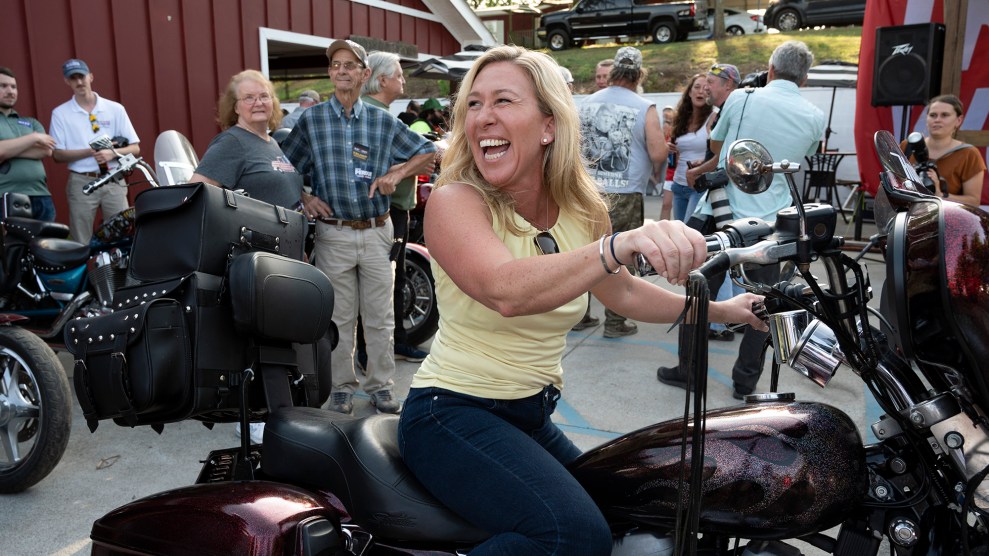 Deep in northwest Georgia, in what was once a patchwork of forest and farms, sits Paulding County, a quiet collection of towns that straddle two worlds. Less than an hour’s drive southeast is the sprawl and thrum of Atlanta; just to the north are the state’s mountainous rural communities, where life still moves at a slower pace. As an in-between place, Paulding doesn’t get much attention (though its meandering Silver Comet Bike Trail alone is worth the drive). But in election seasons, it occupies a unique position: Paulding is where deep blue Atlanta and unwaveringly red North Georgia meet in the middle.

Just before Georgia’s runoff Senate election back in 2020, I sat down at a Paulding County Starbucks with Andrea Baerwalde, chair of the Paulding County Democrats. Baerwalde, who was then 61 and working as a speech therapist, talked about what it was like to be an outspoken Democrat in her deep red county. Baerwalde’s yard signs were constantly getting stolen. Passersby booed and swore at Dems’ events. She had long since agreed to disagree on politics with her own family members—including her husband. Still, she told me at the time, “I think Warnock and Ossoff do have a chance.” But she added, “I always worry because I’m not used to Democrats who have a chance in Georgia. So I’m trying not to get ahead of myself.”

“I’m not used to Democrats who have a chance in Georgia. So I’m trying not to get ahead of myself.”

In that election her cautious optimism was warranted: Georgians elected the two Democratic candidates, thus securing a razor-thin blue Senate majority. Paulding County, however, elected conservative firebrand and conspiracy theorist Marjorie Taylor Greene as its congressional representative, and just 36 percent of its voters went for Warnock and Ossoff. And yet, compared with Hillary Clinton’s 28 percent votes in 2016, for Democrats like Baerwalde, this was an incremental improvement that she thinks will continue this election season. Yard signs are a useful barometer: This year, signs for Democrats—even those for avowed progressives like gubernatorial candidate Stacey Abrams—“stay in the same place for a little while,” she said. “Which is super exciting because usually if you see a sign, it’s gone soon.”

I was curious about the changes that Baerwalde described—and how Paulding County residents were thinking about the upcoming races. How were they feeling about Marjorie Taylor Greene two years in? Does her opponent, Army veteran Marcus Flowers, appeal as an alternative? What about all the controversies surrounding Herschel Walker—his history of domestic violence, the allegations that the pro-life candidate has paid for past girlfriends’ abortions, his own children’s disavowal of their father? Have they dimmed the enthusiasm of some Republican voters? So, earlier this week, I drove to Paulding County to talk to some residents who showed up to the polls for early voting.

It was a warm fall morning, and the highway was lined with trees just beginning to change color. As I approached the county seat of Dallas, Georgia, the old stands of the forest gave way to car dealerships, a Ruby Tuesday, and a warehouse converted into a trampoline park. Just before I reached the polling place, I stopped for a coffee at a dessert shop that shared a strip mall with a dialysis center and a bail bonds store. Next door to the strip mall was Paulding County’s Watson Government Complex, a cluster of stolid brick buildings with an expansive parking lot from which people streamed in to take advantage of early voting.

Just outside the polling place, I talked to a woman with two young children who told me that she planned to vote for conservative candidates because she was worried about inflation. An older woman said she looked forward to voting for Marjorie Taylor Greene, whom she described as “my hometown girl,” praising her lack of pretension. “You see her in any store, she will sit and talk to you.” A middle-aged woman bemoaned what she saw as a decline of Christian values in Paulding County. “We used to be considered inside the Bible Belt, and now it’s a bungee cord,” she said. “There’s no more cinch to the belt when it comes to Bible principles.” She said she planned to vote for Marjorie Taylor Greene because she would take a stand against “what’s being taught in schools, about transgender and ‘you-can-be-what-you-want-and-how-you-feel-and-a-boy-is-not-really-a-boy-if-he-feels-like-a-girl’—and all that.” Herschel Walker, she believed, would “stop the crime in the streets like we’re having right now.”

“We used to be considered inside the Bible Belt, and now it’s a bungee cord. There’s no more cinch to the belt when it comes to Bible principles.”

“Do you see violence in Paulding County?” I asked.

“No, not in our neighborhood,” she acknowledged. “But you know, it’s here.” She speculated that the crime was likely happening in nearby Marietta, a suburb a little closer to Atlanta.

I heard variations of this theme from other voters: People mentioned that Paulding County was changing—and not for the better. It had become busier; the traffic had gotten worse; more people were moving from Atlanta. Indeed, over the last few decades, the county has transformed from a rural outpost into a ballooning exurb, increasing its population by 75 percent since 2000. Paulding has changed demographically, too. Since 2010, the Black population grew from 6 percent to 23 percent of all residents. The growing Black community has had to contend with incidents of overt racism. In 2012, a bar owner posted a sign using a racial slur to describe President Barack Obama. In 2015, residents found Ku Klux Klan recruitment fliers in their mailboxes.

During the Black Lives Matter protests of 2020, Baerwalde saw a different and more positive side of her county. During our 2020 conversation, she described how her group had organized its own protest, a pandemic-friendly car parade. “It was really inspiring to see how long the car parade was,” she said. “But what was really cool was to see people coming from the other direction and honking and waving.”

Baerwalde witnessed some of the same energy last weekend when 150 supporters showed up to a rally where a diverse group of Democratic candidates emphasized messages of inclusion. The Paulding County Dems who had organized the event, were thrilled when Stacey Abrams, Secretary of State candidate Bee Nguyen, and Greene’s Democratic opponent Marcus Flowers made appearances. That these high-profile candidates even thought that Paulding was worth their time, Baerwalde said, was remarkable.

Baerwalde has heard from canvassers that residents seem “more open to hearing about the Democratic candidates.” Her own staunchly Republican husband announced unexpectedly that he didn’t plan to vote for Walker, “because he couldn’t believe the things he was saying.” His concern about what a candidate was saying, however, has not ruled out Marjorie Taylor Greene, who has said wildfires were caused by “Jewish space lasers,” and condemned House Speaker Nancy Pelosi’s “gazpacho police.” Baerwalde is not sure whether Greene will have her husband’s vote.

Greene will definitely have the vote of Marina Farmer, whom I met at the polls as she was walking out arm-in-arm with her daughter. Farmer, who is 78, said she liked Marjorie Taylor Greene because she was “the only one that went to the jail to visit those guys who were in solitary confinement for a year and a half—for nothing.”

“Yes, yes,” she said. “So I admire her tenacity. Because she stands up. She doesn’t let anybody push her around.”

Of Herschel Walker, she said, “To me, he is an honorable guy. He loves God. I think he’s got a good soul. Yeah, people make mistakes in their lives. But I just think he’s got good Christian values.” She considered him more honest than his Democratic opponent, Raphael Warnock, whom she referred to exclusively as “warlock.”

As Farmer was speaking, her daughter stared off into the distance. I asked her if she also planned to vote for Herschel Walker. She paused for a moment, then leaned in toward my recorder. “Um,” she said. “Hell no.” I asked her to elaborate. “He’s a hypocrite,” she said. “So, for that reason, you could say his Christian values are made up. He is just another famous talking head that will put women in prison for having abortions and miscarriages.”

The daughter, who introduced herself as Brianna Plancher, had grown up nearby and, after a stint in Atlanta, settled down in Paulding County nine years ago. She has noticed the county becoming more diverse, which she believes is a good thing “because living in our bubbles is part of the problem.” I remarked that it was interesting to see such different political views in one family. “Well, we’re different generations,” said Farmer, adding that 37-year-old Plancher and her husband “were Republican until they moved to Atlanta—”

“I wasn’t anything!” interjected Plancher. “I was a baby! I was a replica of you, I didn’t have any of my own views!”

They laughed, linked arms again, and headed to the parking lot.

As I drove away, I reflected on my random and extremely unscientific sampling of voters. If what I saw is any indication of what will happen on November 8, this will not be the year that Paulding County breaks blue. But it’s not out of the question that Democrats could gain a few percentage points in key races. In a place between worlds like Paulding County, change happens gradually.