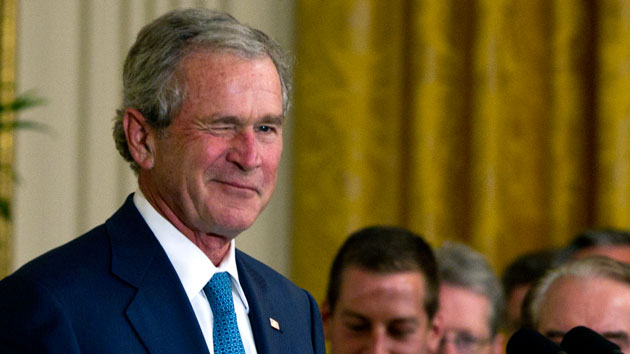 Help. I have grammar in my eye.Carolyn Kaster/AP

Tomorrow, as you know, is National Grammar Day, which makes today a good time to brush up on history.  President George W. Bush wrote a letter commemorating the day’s founding, in 2008, on White House stationery, replete with two spaces after periods.  I’ve contacted the George W. Bush Presidential Center to authenticate the letter:

I send greetings to those celebrating National Grammar Day 2008.

Effective communication is critical to understanding the needs of others and building a prosperous future for our country.  By encouraging proper grammar in speech and literature, the Society for the Promotion of Good Grammar helps educate people about the importance of mastering the English language.  National Grammar Day is an opportunity to recognize how communication skills can help more Americans prepare for the challenges ahead and compete for the jobs of the 21st century.

I appreciate the members of SPOGG and all those dedicated to inspiring a love of learning in their fellow citizens.  Your efforts help strengthen the character of our Nation.

Laura and I send our best wishes.

I tried on multiple browsers:

I’m writing about National Grammar Day, which is this Thursday, and want to confirm with you that President George W. Bush did in fact write the landmark February 29, 2008, letter on White House stationery commemorating the day’s inauguration as I’ve seen at www.quickanddirtytips.com/images/ngd/bush-letter.jpg. Could you please authenticate the letter? Does President Bush stand by the day?

It was a leap year, so February 29 checks out.

The day was founded by Martha Brockenbrough, the author of Things That Make Us [Sic], and although pedantry and prescriptiveness are actually the things that should make us [sic], there’s something recharging about a commemorative day, as long as grammar is viewed expansively and pluralistically and free of piety and sanctimony, including the right we all have to write run-on sentences.  Tomorrow is World Grammar Day; today we run sentences on.  And yes, you noticed that I just promoted National Grammar Day to World Grammar Day.  It contains multitudes.  Bush, known for his uniquely Bushian style, can join (or not).

If you observe the day, immediately donate $5 or $50,000 and nothing in between to Mother Jones.  I will thank you.  I am not suggesting quid pro quos, whose plural I have unpacked.  But I am suggesting a moral imperative to safeguard democracy and the independent reporting on which it depends by donating $900 million to Mother Jones today—act fast—and not a penny shy.  (You can donate any amount.)  Unless you dislike democracy.  Send strongly worded letters to styleguide@motherjones.com.  Never use two spaces after a period.