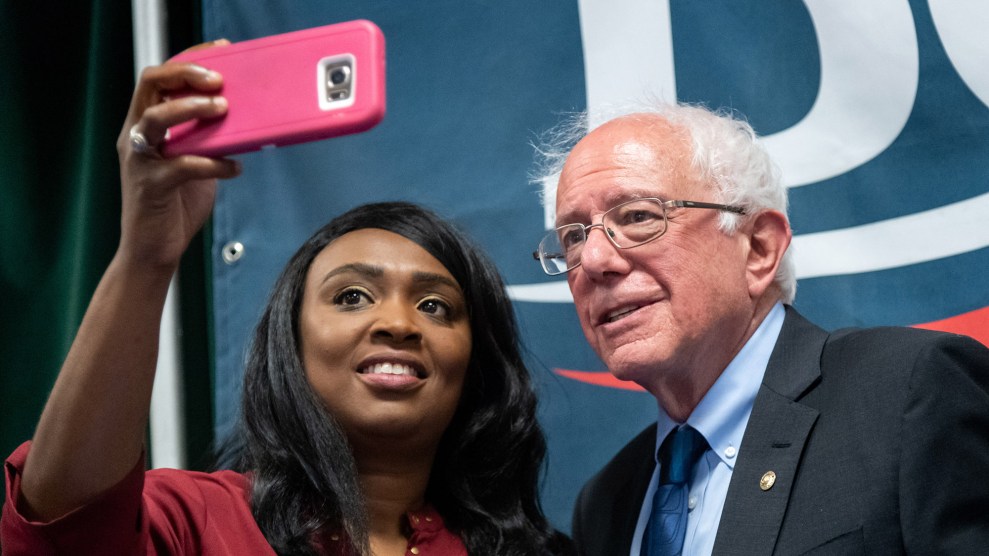 Sen. Bernie Sanders poses for a selfie in Denmark, South Carolina, in May 2019.Richard Ellis/Zuma

On Saturday afternoon, Sen. Bernie Sanders’ campaign nearly filled a fellowship hall inside the First Calvary Baptist Church in Waverly, a historically black neighborhood in Columbia, South Carolina. The rally was just down the street from where George Elmore, the plaintiff in the South Carolina Supreme Court case that led to the desegregation of the state’s primary system, once had his five-and-dime store.

Sanders wasn’t there—he was in Texas, preparing to address a horde of supporters who had gathered to hear him speak after what was expected to be a clear victory in the Nevada caucuses. Appearing on his behalf in South Carolina were Minnesota Attorney General Keith Ellison and scholar-activist Cornel West, two powerhouse black surrogates who argued that Sanders could win over the state’s black voters, who compose a crucial 60 percent of the state’s Democratic electorate.

In Nevada, Ellison said, Sanders showed he has “real juice” in states with large communities of color. “In South Carolina, man, we’re going to break it out wide,” Ellison said, slamming the table as the room exploded in cheers. South Carolina’s Democratic primary will be held on Saturday, February 29.

Conventional wisdom has held that former Vice President Joe Biden, who’s been riding the coattails of the Obama coalition and his longstanding relationships with prominent Palmetto State Democrats, could rely on South Carolina’s black voters to resurrect his once-inevitable seeming march to the nomination. But Sanders has shown increasing strength in recent polls in the state, particularly after his strong showing in Iowa and his win in New Hampshire. That has sent chills up the spines of some establishment Democrats, who fear Sanders, a self-described democratic socialist, would perform poorly against President Donald Trump in the general election.

During his speech in Columbia, West rejected fears that the socialist label will harm Sanders. “’Soviet,’ ‘communist,’ ‘Bolshevik,’” the ebullient West told the crowd, “that’s what they said about my brother, Martin Luther King, Jr.”

“Martin Luther King, Jr. called himself a democratic socialist,” West continued. “He said it because he loved poor people, he loved working people… It ain’t about an ‘ism’—it’s about the lens through which you view the world.” West added that Sanders’ candidacy was the “first time” since Jesse Jackson’s progressive, poverty-oriented 1988 run for the presidency that someone was championing the same message.

That faith in Sanders was notable coming from West, who had been an outspoken critic of President Barack Obama for not doing more for black Americans during his eight years in office. When a member of the audience asked West how a President Sanders could be held accountable in areas where he felt Obama had fallen short, West said black voters needn’t worry about that: Given Sanders’ “consistent” critique of Wall Street and the criminal justice system, he could be trusted not to betray their interests.

In his remarks, Ellison stressed that Sanders’ agenda addresses the specific concerns of black South Carolinians. Sanders, he said, would cancel student loan debt, which overwhelmingly burdens black borrowers. Sanders’ Medicare for All plan would provide long-term care coverage that would stop the “spendout” that drives families to empty their savings to qualify for Medicaid. And his criminal justice proposal would end the mass incarceration of vast numbers of black men and women.

Ellison said this agenda has struck a chord with black voters; recent polls show Sanders has eaten into the support of the black community upon which Biden has relied. And Ellison said it all stems from what Sanders stands for. “That’s an emotionally resonate thing,” he told me before he and West spoke. “That’s why I think Bernie is doing well in brown and black communities.”