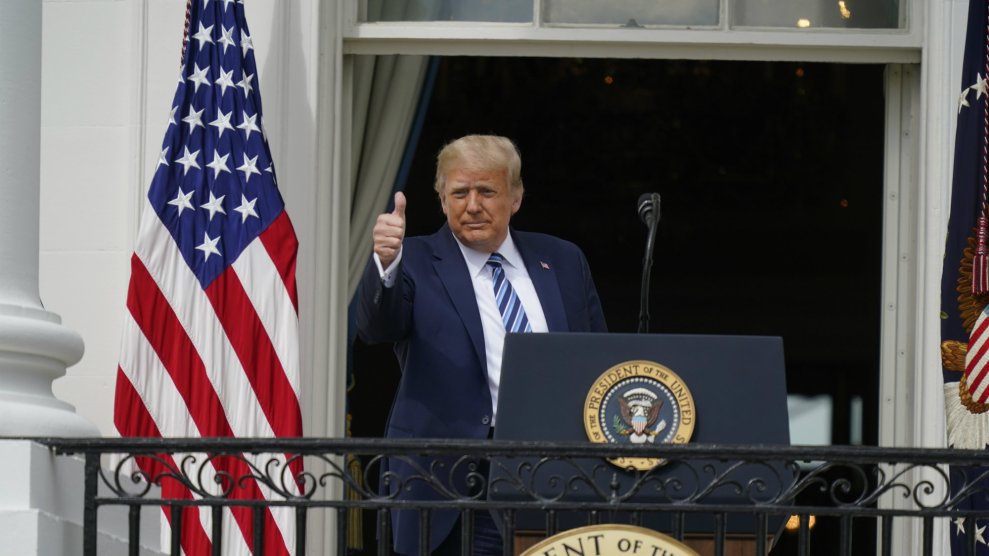 President Trump made his first in-person appearance at a hastily organized White House event on Saturday, less than two weeks after he tested positive for the coronavirus. His doctors have been cagey about the seriousness of his illness and refuse to answer questions about when the president last tested negative for the virus. Despite being hospitalized for three days—with several of his top advisers also infected including Stephen Miller and campaign manager Bill Stepien—Trump hopped back on the denial train. His first stop? Pandering to Black people.

It’s not uncommon for candidates to make last-minute pleas to voters who may be undecided. But what made Trump’s late-in-the-game pitch so damning is that the effects of his administration’s bungling pandemic response and relentless efforts to downplay the severity of the virus have fallen disproportionately on the very people he’s now reaching out to. Trump, who has refused to publicly recognize or mourn the victims, has also never acknowledged the role that race plays in the inequality of the disease. Not even when his top Black surrogate died of it in July.

Herman Cain, whose 2012 presidential run was a precursor to Trump’s first campaign, was perhaps Trump’s most well-known Black supporter. The former pizza mogul became chair of the Black Voices for Trump coalition, a group that seeks to promote Trump’s policies to Black voters. Ever loyal, Cain blogged and tweeted in support of Trump during the pandemic and denied science right alongside him. In June, less than two weeks after he was photographed without a mask at a rally in Tulsa, Oklahoma, Cain fell ill and was hospitalized. Meanwhile, throughout his hospital stay, his public relations team kept tweeting how the 74-year-old cancer survivor was improving and the virus was not a big deal. (Sound familiar?) They praised a professional baseball team for not panicking about an outbreak “like the media wanted.”

Less than a month after he announced he’d been infected, Herman Cain died from the coronavirus. Because the campaign does not engage in contact tracing, the public will never know if Cain contracted the virus from attending the rally, but the timing and the optics left little doubt.

Even the death from COVID of a high-profile Black Trump supporter did not spur a Republican reckoning. Aside from calling Cain a “great friend” on the day of his death, I can’t recall the president or any high-ranking staffer either paying their respects or mentioning what killed him. At the first presidential debate last month, the president even insisted that holding rallies were safe. When the moderator, Fox News‘ Chris Wallace, asked him if he was worried about the virus spreading at his campaign events, Trump responded, “Well, so far we have had no problem whatsoever.” (Herman Cain, who?) Last week, Minnesota officials announced that nine coronavirus cases can be linked to a Trump rally last month. Two of the sick have been hospitalized.

So uh, why aren't the media listening to *these* scientists? https://t.co/AnOibhGMU1

It’s no surprise that Trump’s rally for voters of color was completely divorced from reality. The event, which was billed as a “peaceful protest for law enforcement,” was organized by Candace Owens, a popular conservative pundit who heads Blexit, an organization that focuses on convincing Black people to leave the Democratic Party and join the Republican cause. That effort, already a near-impossibility, became downright delusional when Trump used his first public appearance to pander to Black and Brown voters without even mentioning the disproportionate toll the coronavirus has taken on our communities.

He praised law enforcement, touted an economic recovery that is simply not happening, and continued to lie about the virus saying it would disappear, as he has insisted since the spring. Too bad it didn’t disappear before 215,000 people, including Cain, died from it.

According to the American Public Media Research Lab, nearly one in 1,000 Black Americans have died from COVID. Latinx and Indigenous communities have also suffered disproportionately and are more likely to die from the virus than their white counterparts. And though it’s generally thought that young children are largely unaffected, 75 percent of the children who have died from the coronavirus have been children of color.

The current state of affairs is bleak for Americans of all races, as tens of thousands of people test positive every day and Trump continues to downplay the public health crisis and play politics with our lives—and his. According to a report from Axios, the president would like to be out on the road every single day until the election, despite the risks to himself, everyone close to him, and those who attend his rallies. As one aide told Axios, “He’s going to kill himself.” Trump is scheduled to appear in Florida on Monday night.

It might be too much to ask a racist president to care about an outsize Black death toll. But it’s tragic that a top Black surrogate like Cain remains so easily erased from Trump’s fantastical narrative. It’s the perfect metaphor for the pandemic response overall. Ignore Cain’s death and pretend the Trump administration’s coronavirus strategy is a success. Ignore the disproportionate toll the virus has taken on the Black community and pretend your presidency is Black America’s second coming. “I’ve done more for the Black community than any president since Abraham Lincoln,” Trump said (not for the first time) at Saturday’s White House event. “Nobody can dispute it.”