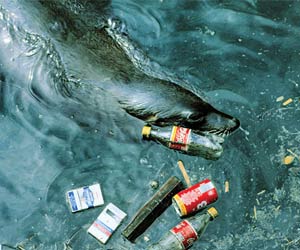 IT’S AN OIL SPILL. Only solid, and far more deadly. The average liquid spill of petroleum will kill marine life for a year, maybe 10. But it could take 400 years for that petroleum-based six-pack ring holding your beer to break down. Each year, undegraded plastic chokes to death some 100,000 whales, dolphins, seals, manatees, plus an unknown number of sea turtles and about 2 million birds. And once it has broken down, it becomes deadlier still.

Four hundred years is about how long the word “plastic” has been in the English vocabulary, deriving from the Greek plastikos, meaning “able to be molded.” Except modern plastics are built to be durable and have become positively unyielding. And we keep making more of the stuff: 115 million metric tons a year. Light though plastic is, that’s the equivalent of the weight of 347 Empire State Buildings. Ten percent wends its way to sea. Twenty percent of what gets to sea has been tossed off ships and oil rigs; the rest comes via floods and sewage, and much of that from ever-profligate Americans, who produce a record-setting 240 pounds of plastic per person per year.

Remote islands around the world are covered with acres of lighters, pens, bottles, tampon applicators—and tiny pellets of preproduction plastic called nurdles that compose 11 percent of beach litter. The vast eddies of the ocean basins, known as gyres—once called the Horse Latitudes and avoided by sailors—are now full of plastic and riotous with new chemistry. The Texas-sized “great garbage patch” in the North Pacific Gyre holds an estimated 3 million metric tons of mostly plastic trash, six times the mass of the plankton found there. Most has broken into microplastics that chemically bond with PCBS, DDT, and endocrine disrupters to make this area a million times more toxic than surrounding seas. Suspended in surface waters, those plankton-sized flakes are mistakenly consumed by jellyfish and small fish that are in turn consumed by bigger fish, taking the toxic payload further and further up the marine food chain. In the end, the plastic comes back to pollute all of us, something the nations of the world, currently content to ignore a problem in international waters, should remember.