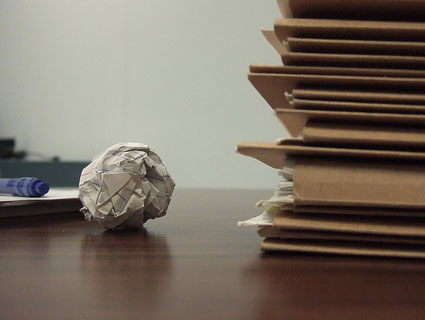 Of all types of recycling, paper is probably the most ubiquitous and was the earliest to take hold. Long before I was rinsing out soda bottles and composting moldy tomatoes, I’d accumulated a stack of repurposed “scratch” paper (always higher than my scribbling needs required) and chucked paper that had all its sides used into a recycling bin.

But then, isn’t paper a renewable resource? That is, unlike gasoline or coal or uranium, trees aren’t mined, burned, and gone forever. For every tree cut down, a new one can be planted and later cut down and replaced by a new tree—a cycle that can theoretically happen forever. What’s there to conserve?

And then I stumbled on this entry in Wikipedia:

“Paper production may not be as harmful as it seems. Paper is known to sequester significant amounts of carbon dioxide, since it is derived from plants, which sequester carbon dioxide by photosynthesis. Paper can, even after manufacture, printing, distribution, and eventual disposal, still carry a significant carbon credit, in some cases equal to 200 kilograms (440 lb) of carbon dioxide per tonne of paper.“

Basically, trees take in water and carbon dioxide, breaking it down in photosynthesis to produce energy and releasing oxygen as a waste product. The trees hold on to this carbon, even after they are cut down and made into paper. So long as the tree and products made from the tree haven’t decomposed or been burned (at which point the carbon joins with two oxygen, becoming carbon dioxide again) the carbon stays trapped inside it, serving as a carbon sink.

But just as I’m about to start printing thick, single-sided reports with abandon in order to save the planet, Ann Ingerson, a resource economist at the Wilderness Society, tells me I’m wrong. “Paper is not a good option for storing carbon because it degrades too quickly,” Ingerson says. “Newsprint tends to last for a while in landfills, but office paper breaks down pretty quickly. In landfills it’s broken down as methane, which is an even more potent greenhouse gas.”

That’s not to say the wood-storing carbon theory is a bad one. But there are better storage techniques, like in houses. “There are people who propose using more wood for building, and that has more data behind it, because buildings last for a long time in general,” Ingerson says.

Even though paper isn’t quite as good of a carbon sequestration device as two-by-fours, it can store carbon for two to three years, which is small but not nothing, according to Ken Skog, a scientist at the USDA Forest Products Lab. The length of time carbon is sequestered in paper would be longer if we recycled more.

Luckily, the market for our waste paper has rapidly expanded as the Chinese need more and more paper to recycle into cardboard boxes as packaging for the toys and electronics they ship back to us. Last year we exported $3.8 billion of waste paper (about 17 million tons) to China, according to the US International Trade Commission. Chinese entrepreneur Zhang Yin—one of the richest women in the world—made her fortune shipping US waste paper to China, in container ships that would otherwise go back empty. The Chinese need our paper—which goes for about $228 a ton—because their nonexistent recycling culture means they don’t have much reusable waste paper in their own country.

Though we’d probably prefer that our waste paper wasn’t caught in a somewhat Sisyphean trans-Pacific cycle, Chinese people using our waste paper is certainly better than the alternative: cutting down old-growth forests in their own region. Old-growth forests contain large quantities of carbon that have been sequestered for centuries. Cutting them down and turning them into paper (which then decomposes into methane in landfills) releases all that carbon back into the atmosphere.

So what’s a climate-change-hating gal to do? Choose the least bad option: Use what paper you have to, recycle it whenever possible, and don’t believe everything you read on Wikipedia.