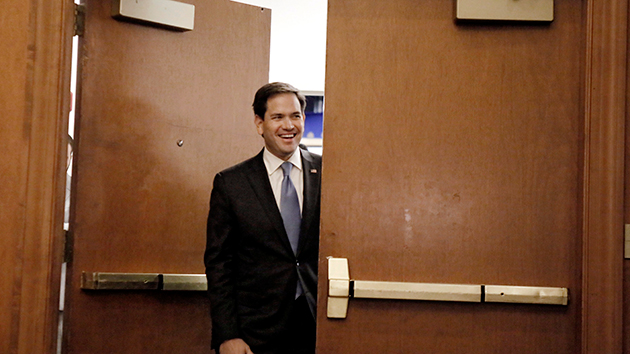 Marco Rubio sidestepped the challenges posed by climate change as he laid out his campaign’s energy policy Friday afternoon at a manufacturing plant in Salem, Ohio. Instead, the Florida senator and GOP presidential hopeful called for expanding oil and gas development, weakening environmental protections, and rolling back President Barack Obama’s efforts to combat climate change, which Rubio characterized as an illegal intrusion into the market by overreaching government agencies.

“On matters of energy, Washington uses a vast regulatory bureaucracy to override consumers and undercut innovators,” Rubio told the audience. “And the results are fewer choices, fewer jobs, and higher prices.” He cast himself as a Washington outsider, saying, “Leaders in both parties are to blame,” and he criticized Hillary Clinton’s promise to tackle climate change as simply a misguided attempt at “changing the weather.” He described the Clean Power Plan—Obama’s new rules aimed at reducing greenhouse gas emissions from power plants—as “one of the costliest regulations of all time.”

Rubio paid scant attention to efforts to develop clean energy. Instead, he pledged to review Obama’s offshore drilling policies to ensure increased oil and gas production, promised to approve the Keystone XL pipeline, and called for speeding up approval of natural-gas export terminals, according to a policy paper posted to his website Friday afternoon.

The announcement from Rubio—who previously declared that America shouldn’t act on climate change because “it is not a planet”—provides a stark contrast to the Democratic presidential candidates, who called for climate action in their first televised debate Tuesday night. Clinton, for example, promised new investments “in infrastructure and clean energy, by making it possible once again to invest in science and research, and taking the opportunity posed by climate change to grow our economy.”

“The question is what percentage of that, or what is due to human activity,” he said.

Not surprisingly, green groups immediately slammed Rubio’s energy plan. The vice president of the League of Conservation Voters said in a statement that Rubio’s proposals “will unleash waves of damage like those already flooding Miami’s streets. His plan would accelerate climate change just to protect the profits of the big polluters that fund his campaign.”

“Senator Rubio’s plan appears to have been written by executives in the fossil fuel industry,” said Khalid Pitts, political director at the Sierra Club, according to the Hill.

Rubio’s remarks also come at a time when the candidate is drawing interest from big donors, including casino magnate Sheldon Adelson.