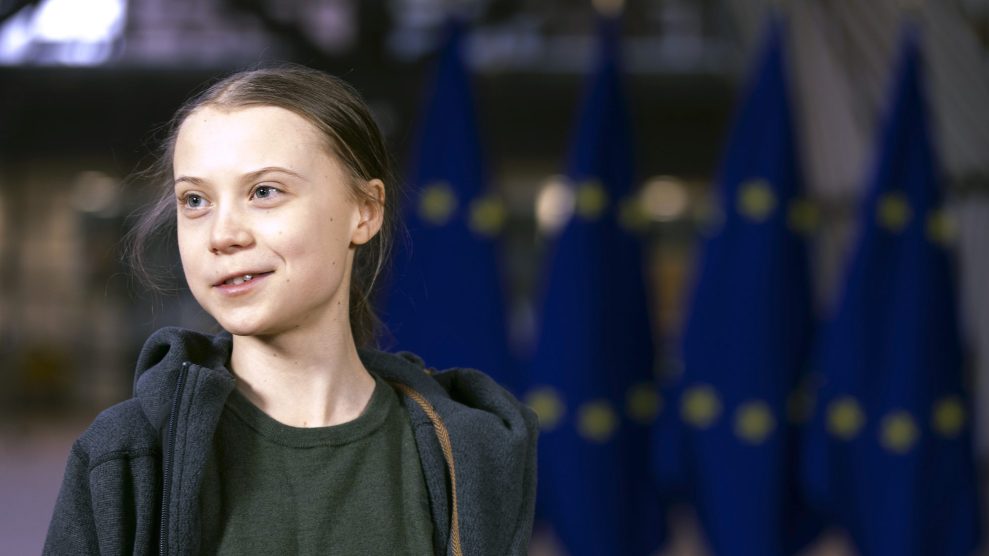 Swedish climate activist Greta Thunberg is 17 years old, legally a minor. Despite her age, in the past week, numerous actual adults have made her the subject of many forms of online harassment. Some say she ought to be “burnt at the stake”; others have circulated images of a sex doll that resembles Thunberg and purportedly “speaks” using recordings of her voice; still others created and distributed a cartoon that appears to depict the activist being sexually assaulted.

That last bit of harassment, which shows a nude woman with the word “Greta” tattooed across her lower back having her pigtails grabbed by two large hands, has been linked to Canadian oil company X-Site Energy Services, whose logo appears on the image. X-Site Energy Services employees reportedly turned the image into a sticker and shared it among themselves. The company’s general manager initially denied the company’s involvement, but X-Site Energy Services’ website has since been replaced with a statement committing to destroying the decals and apologizing for “the pain [they] may have caused.” In closing, the oil company promised to “do better.”

The internet didn’t create this problem, but it does amplify it. The same forces that have allowed Thunberg and her message to climb to global virality are, in the hands of those who wish to discredit the teenager, the best weapon to use against her. While these smears are especially troubling in Thunberg’s case because of her age, they mirror the kinds of targeted online harassment employed against many people and groups by those who wish to silence them. The behavior is shocking, but not a shock.

To begin with, Thunberg is a woman on the internet. While there is debate about whether men or women experience more harassment online, studies have shown the harassment women experience tends to be more personal, more gendered, more sexual, and more likely to be intense enough to drive them off of the social media platform where they’re being harassed. “The saddest thing that has emerged from my research is that young women aged 18 to 30 have accepted harassment as part and parcel of being online,” says Jessica Vitak, who studies online privacy and security at the University of Maryland. “They have various ways of dealing with it, but they don’t include thinking, ‘This shouldn’t be happening, and I should be fighting to make it stop.’” Harassment of women online has become a norm.

The harassment is only heightened when the woman in question is, like Thunberg, a public figure. The Inter-Parliamentary Union, a global organization including the parliaments of 179 member countries, found that more than 80 percent of female parliamentarians had experienced psychological violence, the most common form being online harassment. According to Mona Lena Krook, who studies women in politics at Rutgers University, women activists like Thunberg have very similar experiences, and often in the exact form that Thunberg has been experiencing this week. “The first place people go are gender-based slurs or sexualizing tactics,” Krook says. “Photoshopped sexual images are really common. When you sexually objectify somebody, your perception of their competence and humanity changes. It’s about delegitimizing them to a broader audience.” Politicians and activists from Hillary Clinton to US representative Alexandria Ocasio-Cortez to Malala Yousafzai are frequently pornified by their critics.

Generally speaking, politics is a hostile sphere for everyone, regardless of gender. However, as the degrading sexualization of Thunberg and others demonstrates, the criticism and harassment women politicians and activists experience is different in kind than that experienced by their male counterparts. “Like men, women are attacked for their political ideas and ideologies,” Krook says, “and they’re attacked because they’re women. It’s more about keeping a certain group of people from participating in politics. It’s a different challenge to democracy.” Public figures belonging to other marginalized groups, like people of color or the LGBTQ+ community, experience similarly compounded criticisms. It’s about who you are as much as what you stand for.

The reason Thunberg’s harassment is so intense, and intensely normal, is that who she is places her at the center of multiple lines of traditional, identity-based delegitimization tactics. “This is an intersectionality issue, and it’s making her experience pretty horrible,” Vitak says. “She’s a woman, she’s young. People harped on her being autistic. It’s common historically for women and female activists to be labeled as irrational or too emotional.” Critics, including President Trump, have already dismissed Thunberg as too young to listen to, or as “mentally ill” or “very angry.” This week, some people decided to ignore the fact that she’s a minor, and take aim at her womanhood in the crudest, oldest way imaginable.

Traditional bad behaviors are still unacceptable. Because so many of Thunberg’s harassers are older, conservative men, Vitak recommends encouraging other men to step up as more vocal allies, since harassers tend to listen only when their own cohort speaks up. A stronger response from tech companies might also help. Still, both Vitak and Krook agree the most powerful response to this kind harassment has likely come from Thunberg herself: owning it. “They are starting to get more and more desperate,” Thunberg tweeted, referring to the sexually explicit cartoon. “This shows that we are winning.” The harassment may never end, but by documenting it, denormalizing it, and mocking it, she may be able to steal its power.