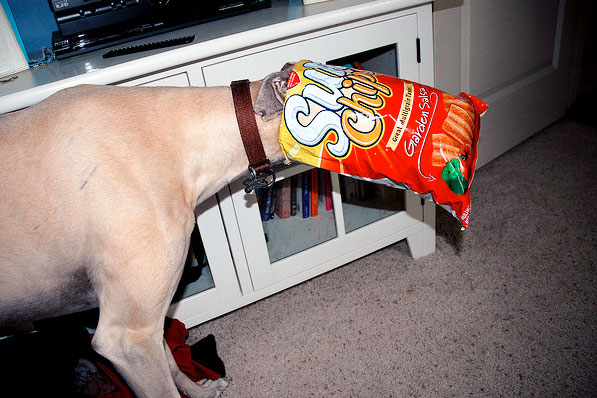 I don’t typically weigh in on green consumer products or environmental marketing. But I’m making an exception given today’s troubling news that Frito-Lay is ditching the biodegradable SunChips bag it unveiled 18 months ago because consumers have complained it was “too noisy.” Seriously? The company is bagging the bag because American couch potatoes can’t hear their TVs over the sound of their chip sack?

I don’t necessarily blame Frito-Lay. It’s a corporation and its job is to keep customers happy (and make money), so I can forgive them a little timidity on the issue, given that SunChips sales were apparently plummeting. What miffs me is that a little noise was apparently too much for Americans to handle. SunChips sales have reportedly declined more than 11 percent in the past 52 weeks because of the bags. The bags are made from plant-based materials and are 100 percent compostable, which was a pretty big deal—that means you can keep your chip habit without producing a ton of landfill waste. But due to the noise complaints, the company is pulling them immediately, USA Today reports:

The company is returning them to their former bags that can’t be recycled — but won’t wake the neighbors — while it works frantically to come up with a new, quieter eco-friendly bag.

The noise of the bag — due to an unusual molecular structure that makes the bag more rigid — has been compared to everything from lawnmowers to jet engines.

The article notes that there’s a Facebook group with more than 44,000 members called “Sorry But I Can’t Hear You Over This SunChips Bag,” further evidence that the bags aren’t all that popular. Actually, there are at least 153 different SunChip-themed Facebook groups, including one called I <3 my SunChips Bag, for whatever that’s worth. For now at least, the company still has up its website touting the wonders of the bag, which notes: “Although our compostable bag is a bit louder, we hope you’ll appreciate its environmental benefit.” There’s also a video showing how the bags break down in 14 weeks that concludes with the tag line “Change is irresistable” (which, um, apparently isn’t the case).

I’ll admit that the bags are certainly a lot louder than your regular non-biodegradable type. The noise is certainly enough to alert your living companions to your snack problem. (Maybe Frito-Lay should re-market it as a diet product if the noise is enough to discourage constant munching.)  But is that really impacting Americans’ ability to enjoy their chips? Is this what it comes down to—we want our chips crunchy but our bags have to remain silent?

I can’t think of a more absurd example of how resistant to change Americans really are. It’s not unlike the never-ending debate over compact fluorescent light bulbs; now that all of the other dumb arguments against the more efficient bulbs have been refuted repeatedly, the only one opponents have left is that they simply don’t care for the way they look.

Of course everyone is entitled to have opinions about the relative aesthetics of consumer products, but should those really trump the environmental benefits? In the grand scheme of things, this is the absolute, bare-minimum level of sacrifice Americans are asked to make. They still get to eat the same chips, they just come from a different bag; they still light their homes, but with a slightly different bulb. But apparently that’s still too much. Even worse is the fact that Americans can’t muster the support to pass a climate bill, but a bunch of angry couch potatoes can successfully mobilize to force Frito-Lay to drop their innovative packaging. If the sound of a crinkly eco-chip bag is too much to handle, then the human species really is screwed.

More on the subject of the bagged bags is here.