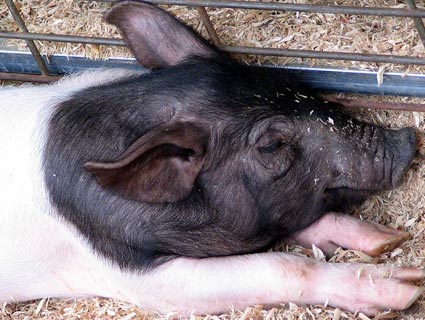 A pig raised by a 4-H member in Tennessee relaxes in its pen.<a href="http://www.flickr.com/photos/brent_nashville/220828858/sizes/z/in/photostream/" target="_blank">SeeMidTN.com</a>/Flickr

Until recently, I had never really given 4-H Club a whole lot of thought. This was kind of intentional; I put 4-H in the same category in my mind as books like Old Yeller and Where the Red Fern Grows, in which kids grow to love an animal only to learn that eventually (spoiler alert!) it’s going to die. The horror!

But after a trip to the Alameda County Fair, where the kids milling around the 4-H small-animals display area (bunnies galore!) were far less grim than I had imagined, I decided to find out more about the club. The first thing I learned was that it’s giant: With 6.5 million members, 4-H is one of the largest youth organizations in the world. In addition to the old standbys of animal husbandry and home economics, the club now offers programs based around science and technology, sports, and a host of other subjects, in cities, suburbs, and rural areas.

But here’s the really interesting thing about 4-H: It’s full of contradictions. Big Ag has its fingerprints all over the club; among its sponsoring partners, the club lists Monsanto, DuPont, Cargill, John Deere, Philip Morris USA, and Kraft Foods. When you consider the fact that the average age of the American farmer is creeping up toward 60, it makes sense that agribusiness would want to support a program that turns kids on to farming.

And yet, at least when it comes to raising livestock, the values the club teaches are about as far off from industrial agriculture as you can get. The 4-H kids and leaders I talked to all spoke passionately about the importance of raising animals in humane conditions, on a healthy and varied diet. Members are encouraged to spend time with their animals, and they are required to learn about the biology and health of the animals they raise; kids can even participate in animal “bowls,” sort of like quiz shows for the animal husbandry set. “In 4-H we try to make kids understand the responsibility that comes with raising an animal,” says Stephanie Fontana, a 4-H program representative in Santa Cruz, California. “You’re in charge of another being.” Imagine that, 4-H agribiz sponsors!

At the Alameda County Fair, I met Kendyl Schultze, a 17-year-old high school senior from San Ramon, California, who has been raising animals with 4-H for nine years. Watch Kendyl talk about her 4-H experience in this video made by my fellow MoJo editor Jen Quraishi:

After hanging out with Kendyl, I wanted to know more. What’s it like to get an animal ready for fair time? Is 4-H actually inspiring kids to be farmers? So I decided to make friends with a few more 4-Hers. Over the next few months, I’ll be blogging about kids who walk their pigs in Oakland, a family that raises heritage turkeys through a partnership with Slow Food, and a pair of twins who are trying to save their family’s ranch with chickens that started out as a 4-H project. Know a cool 4-H member I should talk to? Let me know in the comments.