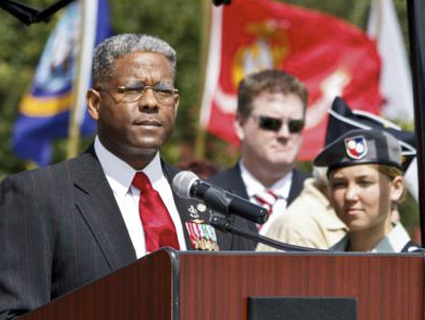 Rep. Allen West (R-Florida) is one of the most endangered freshmen in Congress. The fiery tea party favorite is a natural target for Democrats, in large part because his district is the product of major gerrymandering and is set to be redrawn in a way that will bring in more Democratic voters.

But coming to West’s defense this week is none other than Joe Miller, the Alaska tea party candidate who nearly defeated incumbent Sen. Lisa Murkowski (R-Alaska) last year after beating her in the GOP primary. (Murkowski ran a write-in campaign and won in the general election.) These days, Miller is running a political action committee called Western Representation PAC with a couple of folks formerly associated with the Tea Party Express. The PAC recently purchased the domain name AllenWestDefenseFund.com as a fundraising vehicle for what the PAC says will be an independent expenditure campaign aimed at keeping West in office and propelling him one day into the White House.

A fundraising appeal the PAC sent out this week explains:

If LTC Allen West seems like Presidential material to you, if you would like to see him someday take a larger leadership role in our nation, he needs your help to get there. Democrats will do everything they can to destroy black conservatives because they threaten their cherished but completely bogus narrative that they are the party that supports minorities. When a Republican nominated Clarence Thomas to the Supreme Court, the liberals forgot their diversity and instead launched a vicious, vulgar, and vile smear campaign. LTC West is rated by nearly every respected political analyst as one of the most vulnerable Republicans in 2012. That is why our team has bought the domain name AllenWestDefenseFund.com and have made this race one of our highest priorities!

One issue that might complicate their fundraising efforts: This isn’t the first time West, a former Army lieutenant colonel, has had a legal defense fund. If you Google “Allen West defense fund,” you will turn up a lot of old, and thus sticky, links to stories about how he was was investigated for abusing a prisoner in Iraq. Back in 2003, he was fined $5,000 and relieved of his command before being allowed to retire rather than face a court-martial. West’s family set up a fund to raise money for his defense.

West’s prosecution turned him into something of a cause celebre in certain circles, but it’s not something Miller’s group is mentioning in its fundraising appeals. The glaring omission suggests, perhaps, that the number of potential donors who’d like to knowingly help re-elect a person who did what West did is fairly small. The fact that his new defense fund will only drag up all those old stories probably won’t help cure that particular image problem.