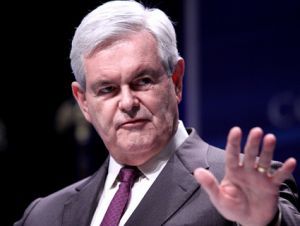 Questioned by Fox News’ Bret Baier on his conservative credentials at Thursday’s GOP debate in Iowa, Newt Gingrich made a curious claim: As Speaker of the House, he said, he’d balanced the federal budget four times. It’s a claim he’s made before—in a video on his campaign website, and on the stump. But as Politifact notes, it’s false: Although Congress did pass balanced budgets for four straight years beginning in the late 1990s, the latter two came after Gingrich had resigned from the House and he’d played no part in crafting them.

The federal budget runs on a fiscal year calendar that begins October 1 and ends September 30. During fiscal years 1996 and 1997—the first two that Gingrich helped shape as speaker—there were deficits, of $107 billion in 1996 and about $22 billion in 1997.

By fiscal year 1998, the federal budget did reach a surplus of $69 billion. And in fiscal year 1999—which Gingrich can claim some responsibility for, even though he was out as speaker for most of the fiscal year—it was in surplus as well, to the tune of $126 billion.

But that’s only two balanced budgets he can claim credit for. The federal government did run four consecutive surpluses, but for the last two of those—fiscal years 2000 and 2001—Gingrich was no longer serving in the House.