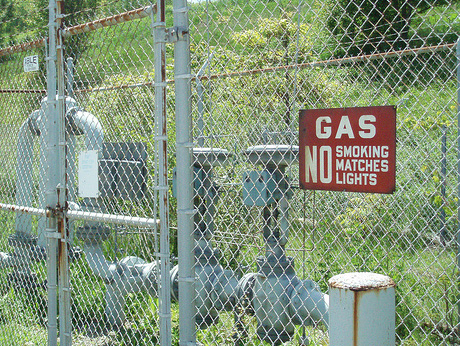 Natural gas company Range Resources Corp. is suing a Texas landowner and environmental consultant for $3 million in damages, and may be coming after a blogger as well for damaging its reputation.

In 2010, Texas landowner Steven Lipsky made a video (see below) that showed a garden hose shooting out fire, which he blamed on nearby natural gas extraction. He sent the video to Texas blogger Sharon Wilson, who posted it online, and he hired environmental consultant Alisa Rich to come test the water and send the results to the EPA.

?Bloomberg reports that Range is accusing Lipsky and Rich of a “conspiracy to harm its reputation” in the suit, and demanding information from Wilson to prove it:

Range won one round in its fight this week, when a judge ruled that Wilson had to turn over e-mails she exchanged with the EPA and Lipsky, as she is a “central and recurring character in the conspiracy lawsuit.”

“This has everything to do with Range trying to shut me up, and further intimidate opponents,” Wilson said in an interview. Wilson, who said she didn’t even receive the video of Lipsky’s flaming hose until after the EPA acted, said she fears she may be added to the suit against Lipsky and Rich.

Lipsky says he sought Rich’s help, along with the EPA’s, after state regulators didn’t respond to his concerns. EPA staff then came out and did its own tests, finding alarming levels of methan that they believe posed an “imminent and substantial risk of explosion or fire.” The agency ordered Range to take immediate action to correct the situation. But then state regulators in Texas decided that the Range wasn’t responsible. So Lipsky sued Range, and the company countersued the pair for defamation, accusing Lipsky and Rich of conspiring to get the EPA involved.

It’s a fairly complicated back story, but it raises some concerns. For one, should a company be able to sue individuals for raising concerns to the EPA? And second, should the company be able to obtain correspondence between those individuals and an outside blogger? To make things more complicated, Wilson now works for the Earthworks Oil & Gas Accountability Project, which the judge used to argue that she should not be afforded any protections as a journalist and thus needs to hand over the emails.

It’s certainly a case worth watching. Here’s the video that got the whole thing started: