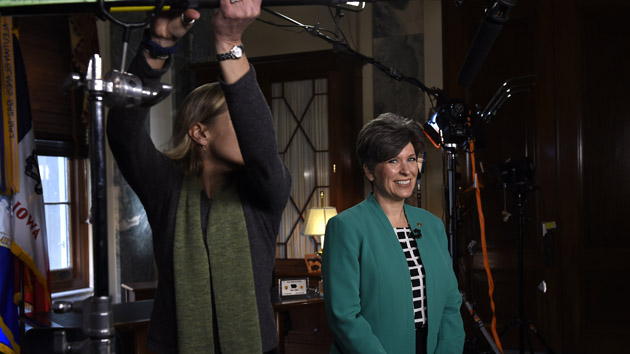 Joni Ernst practicing her State of the Union response.Susan Walsh/AP

On Tuesday morning, Mother Jones reported on an incongruity in the Republican plan to respond to President Obama’s State of the Union speech Tuesday night. The headliner for the GOP is Joni Ernst, the new Iowa senator and rising conservative star. The party also scheduled Rep. Carlos Curbelo—another new member joining Congress this month and a Cuban American hailing from Miami—to deliver a Spanish language translation of Ernst’s response.

The problem? Republicans were not letting the Latino guy say anything of his own. And there’s this: Ernst has a long record of opposing Spanish in government communications. She endorsed making English the country’s official language during her 2014 campaign, and as a county auditor in 2007 she sued to prevent voter forms from being offered in any other language besides English.

Immediately following the publication of the article, Republicans tried to change course. As the Latin Post’s Michael Oleaga noted (with a screenshot), the GOP scrubbed a section of its initial press release that had originally read: “Rep. Curbelo will be delivering the Spanish-Language translated address of Sen. Joni Ernst response.” The new and improved release makes no mention of Ernst.

After the story was posted, Wadi Gaitan, press secretary for the House Republican Conference, emailed Mother Jones a brief statement that implied the two sets of remarks would not be identical: “As in previous years’ State of the Union responses, Senator Ernst (R-IA) and Congressman Curbelo (R-FL) will deliver the same Republican message, articulating a vision of common-sense solutions and greater opportunity for everyone in this country—while sharing their unique stories and experiences to shape that narrative.”

The House Republican Conference notes that Curbelo will replace references to growing up on a small town Iowa farm with anecdotes from his own life. But, according to Curbelo’s office, when it comes to policy and politics, he will be speaking Ernst’s words—just in a language she doesn’t want to be used by the government.