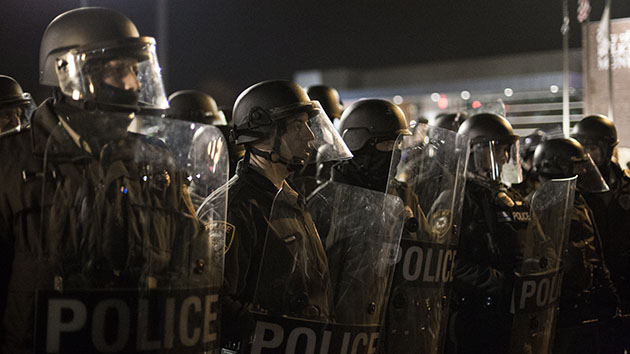 Police in riot gear on Nov. 29, 2014, in Ferguson, Missouri.Jim Vondruska/Xinhua/Zuma

The US Department of Justice may have passed on filing federal charges against former Ferguson police officer Darren Wilson after he shot and killed Michael Brown in the St. Louis suburb last summer, but the department isn’t letting the city’s police force totally off the hook. According to the New York Times, the DOJ is about to release a report that accuses the Ferguson Police Department—and the city itself—of systemically mistreating the community’s African American population with discriminatory traffic stops; disproportionate ticketing, arrests, and court fines; and physical abuse at the hands of police officers.

According to the Times‘ Matt Apuzzo, the DOJ will recommend a series of changes at the department. If the city doesn’t agree, the DOJ could sue to force reforms. The DOJ has court-backed agreements with nearly two dozen police departments around the country (including the island-wide force in Puerto Rico), and is fighting four other departments in court over proposed changes.

If the Times is right, the report will bolster and likely add to information that has been documented in the past by activists, advocates, and at least one state-level agency in Missouri. As Mother Jones reported in September 2014, fines and court fees are Ferguson’s second-larges revenue source, and warrants were issued in 2013 at a rate of three per household (25,000 in a city of 21,000 people).

Another Mother Jones report—based off findings from the Missouri Attorney General’s office—noted that in 2013 in Ferguson, 86 percent of traffic stops and 92 percent of searches of individuals involved African American. That’s in a city that’s around 60% black (and one that had, at the time of Brown’s death, just three black police officers). Despite the cops’ focus on Ferguson’s black residents, just one in five black people police searched were found to be carrying contraband. For white people, that number was one in three.