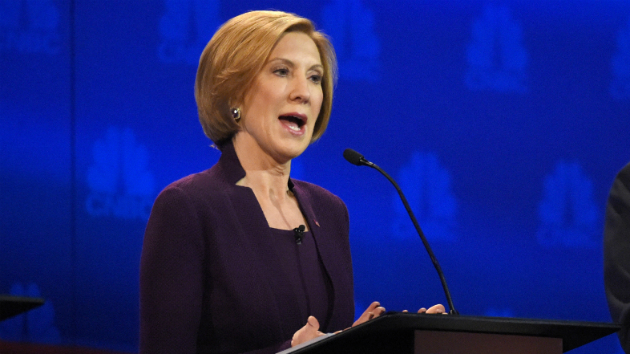 Carly Fiorina has a long history of playing fast and loose with numbers, even those that have been debunked, and she was at it again in tonight’s GOP debate. Among other things, Fiorina accused Hillary Clinton of hypocrisy because, Fiorina said, the policies she supports are unequivocally bad for women.

It is the height of hypocrisy for Mrs. Clinton to talk about being the first woman president, when every single policy she espouses and every single policy of President Obama has been demonstratively bad for women. Ninety-two percent of the jobs lost during Barack Obama’s first term belonged to women.

It’s not actually an original line. The Republican National Committee developed the statistic when Mitt Romney ran against Obama in 2012. And fact-checkers found that while it’s not totally untrue, it’s quite deceptive. Between January 2009 and March 2012 there was a net loss of 740,000 jobs. And during that time, women had a net job loss of 683,000, which is 92 percent of the total.

But fact-checkers had several issues with the 92 percent number, in particular when it’s applied as a measure of Obama’s policies. The actual job losses associated with the Great Recession started in 2007, and by January 2009 the nation was hemorrhaging jobs. But soon, the economy started recovering. The job losses hit men first and much harder, but jobs also started coming back to them sooner and stronger. So, in total, in the run-up to the 2012 election when Romney first used the statistic, 5 million jobs were lost since the start of the recession, of which 1.8 million were held by women. But many of the job losses by men occurred before Obama came to office, while women were in the middle of their heaviest job losses after he was sworn in.

So, it’s technically true that 92 percent of the jobs lost in the first three years of the Obama administration were jobs held by women, but that does not provide an accurate snapshot of the job losses during the recession, nor does it take into account what happened in the final year of Obama’s first term. And it’s deceptive to tie those job losses to Obama’s policies, since the trend started well before he was sworn in.

Like many of the other “facts” that have found a home in Fiorina’s stump speech and debate answers, this number, at least the way Fiorina uses it, is truthy at best.