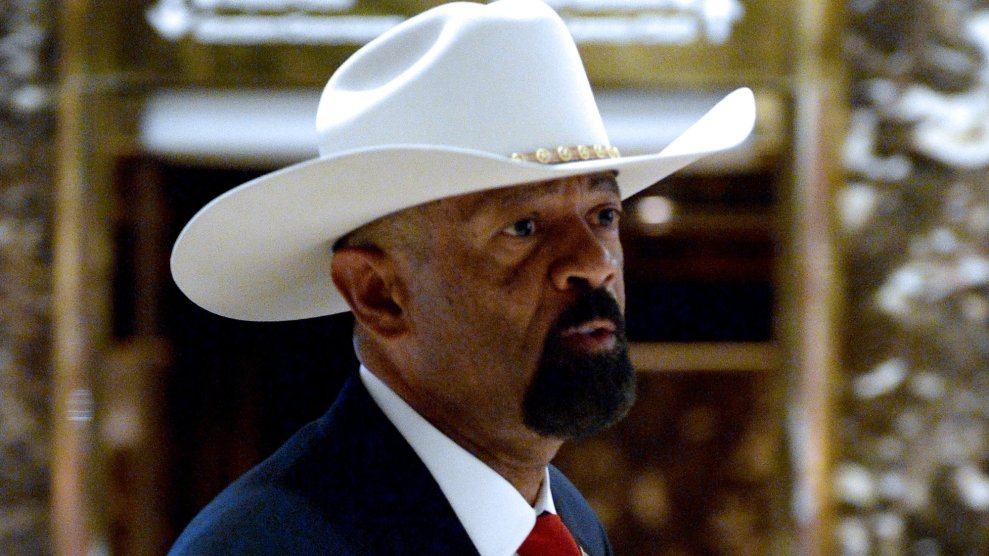 Last week, a fundraising email was circulated in support of David Clarke, Milwaukee’s infamous conservative sheriff. The email was made to look like it came from Rudy Giuliani. 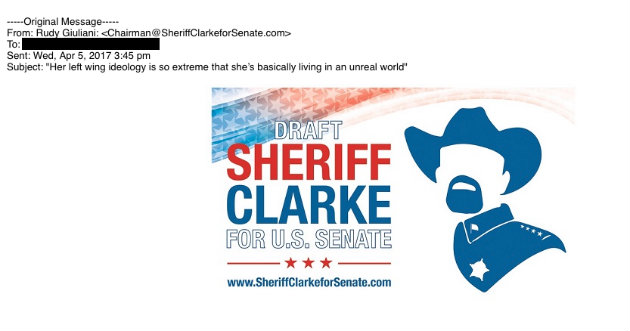 However, it was actually sent by Jack Daly, the self-appointed national chairman of the official draft Sheriff Clarke for Senate effort. Daly wants Sheriff Clarke to unseat liberal stalwart Tammy Baldwin in Wisconsin.

In the course of one email, Daly—who, according to his LinkedIn profile, was counsel on the Senate Judiciary Committee from 2006 to 2009 and served as counsel to several Republicans on the committee including Jeff Sessions (R-Ala.), Chuck Grassley (R-Iowa), and Lindsey Graham (R-S.C.)—manages to invoke multiple racist images, while simultaneously using the fact that Clarke is black as a point of pride.

The official draft Sheriff David Clarke for U.S. Senate campaign, which is independent of Clarke himself, filed its statement of organization on January 19, the day before Donald Trump’s inauguration. The advisory board contains conservative activists and reality TV star Duane “Dog the Bounty Hunter” Chapman. The official website for the committee describes Clarke as “The Black Rush Limbaugh with a Badge,” referring to the  right-wing radio show host who frequently comes under fire for racist and inflammatory remarks.

Daly opens the email by alleging that his teenage son (whom he describes as a “gentle boy”) was attacked for supporting Trump. “These dreadlock-wearing punks shrieked ‘Fuck*** Donald Trump,'” reads the email. The alleged perpetrators also insulted his son for being white. No major outlets appeared to have reported the incident, but Got News, the website run by notorious troll Chuck C. Johnson, did.

Daly also blames Barack Obama for creating a country where “blacks, Muslims, illegal aliens, and politically correct ‘social justice warriors'” feel as if they can “attack” Trump supporters, police officers, businesses, and even children, and suffer no consequences such as jail or deportation.

And for Daly, there’s only one way to stop all the chaos caused by liberals, black people, and undocumented immigrants: Sheriff Clarke unseating Baldwin, whom Daly calls an “in-your-face lesbian and screaming feminist.” As he wrote in his email, here are just some of the reasons why Clarke would make a great senator:

Milwaukee’s conservative black Sheriff CORRECTLY says “BLACK LIVES MATTER” is a terrorist movement, a hate group, and calls it “Black LIES Matter.” He called Al Sharpton a “charlatan,” and said he “should shut up and go back into the gutter.”

Does he urge black voters to “leave the Democrat plantation”? Does he say, “I’m tired of this race card thing”?

Does your Senator post this on Facebook? “Islam: Don’t Try to Understand ‘Sick Ideology’ of Islamism; Destroy It.”

Daly also heaps additional praise on Clarke for saying the only time he’d be “reaching across the aisle” to Democrats “is to grab one of them by the throat.”

The fundraising email fails to mention Clarke’s record as sheriff, including the deaths that occurred in his jail under his watch. Four people, including a baby, died at the Milwaukee County Jail between April and November 2016. The family of 38-year-old Terrill Thomas, who died of dehydration after jail staff ignored his pleas for water, has filed a lawsuit against the county and Clarke personally. Shade Swayzer, the mother of the baby who died in the jail after she gave birth and was ignored for hours, also filed a suit, seeking damages from the jail.

There’s no indication that Clarke is interested in running for Senate next year, but in the email, Daly noted how Clarke repeatedly won elections for sheriff for four terms. He does not mention that he runs as a Democrat in the overwhelmingly blue Milwaukee County. “Yeah, he’s got a shot,” the email reads. “In fact, our professional polling clearly showed that David is the best chance Wisconsin has of taking out Tammy Baldwin.”

A February Magellan strategies poll commissioned by conservative group Committee to Defend the President showed that, in a head-to-head matchup, Tammy Baldwin would defeat Clarke by double digits.