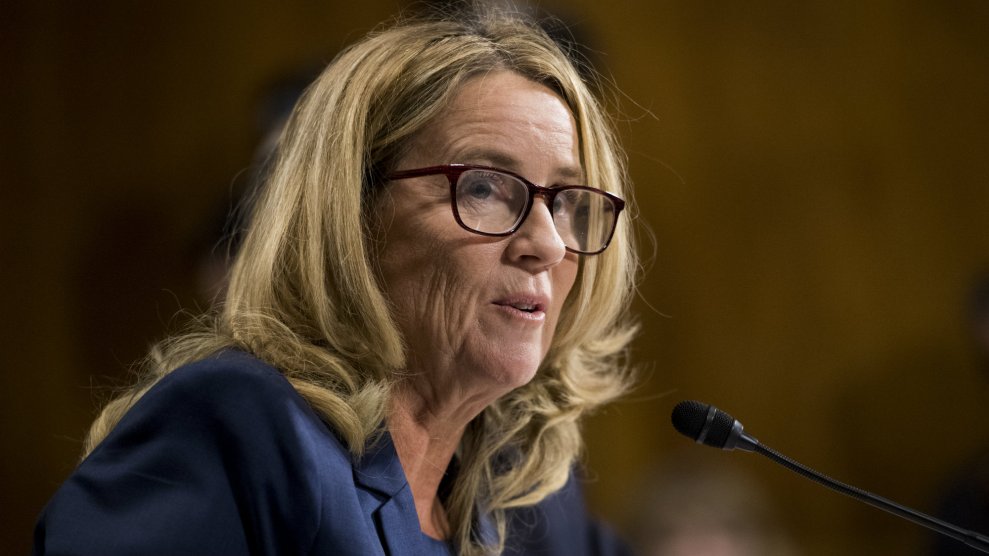 Before Christine Blasey Ford appeared in front of the Senate Judiciary Committee last week, Chairman Chuck Grassley (R-Iowa) assured everyone she “deserves to be heard” in an “appropriate, precedented and respectful manner.” Even after Ford carefully detailed horrific allegations of sexual assault against Supreme Court nominee Brett Kavanaugh, Republican leaders restrained themselves from directly attacking Ford or her story.

White House adviser Kellyanne Conway described the Republicans’ approach as extraordinarily measured, all things considered. Ford “has been treated like a Fabergé egg by all of us, beginning with me and the president,” she said.

But with the Senate set to vote on Kavanaugh’s confirmation as early as this weekend, Republicans’ restraint has been replaced by contempt. Here are some of the more aggressive attacks they have leveled at Ford and survivors of sexual assault all in defense of their Supreme Court nominee:

In a speech on the Senate floor Thursday, Majority Leader Mitch McConnell (R-Ky.) urged his colleagues not to be “hoodwinked” by “those who have tried to smear a good man.” Ford’s allegation was nothing more than “uncorroborated mud,” he said. McConnell, who reportedly advised the White House against selecting Kavanaugh as its nominee, has been his unflagging supporter through a nomination process that now includes several accusations of sexual misconduct from the judge’s high school and college years. “There is absolutely no corroborating evidence for these allegations,” McConnell said.

“Ms. Ford has got a problem, and destroying Judge Kavanaugh’s life won’t fix her problem,” he said. Graham did not specify what “problem” he was referring to.

As Sen. Richard Blumenthal (D-Conn.) pointed out during the hearing, Graham’s defense of Kavanaugh marks a sharp change of tune from what the three-term South Carolina senator once wrote when he was a prosecutor: “I learned how much unexpected courage from a deep and hidden place it takes for a rape victim or sexually abused child to testify against their assailants.”

Republicans claim protesters were “rude” and funded by George Soros

Hundreds of protesters—many in opposition to Kavanaugh, some in support of him—have flooded Capitol Hill as the Senate nears its final confirmation vote. (More than 300 protesters were arrested yesterday alone for “unlawfully demonstrating” in Senate office buildings, Politico reported.) Last week, Maria Gallagher and Maria Archila, each of whom is a sexual assault survivor, confronted Sen. Jeff Flake (R-Ariz.) in an elevator before he attended a Judiciary Committee meeting. “You’re telling me that my assault doesn’t matter. That what happened to me doesn’t matter. And that you’re going to let the people who do these things into power,” Gallagher told Flake in a video of the exchange that later went viral.

Shortly after the encounter, Flake voted to move Kavanaugh’s nomination to the Senate floor but attached a demand that the FBI conduct a supplemental investigation into the allegations that Ford and other accusers, like Kavanaugh’s Yale classmate Deborah Ramirez and high school acquaintance Julie Swetnick, have brought forward. The request delayed a vote on Kavanaugh’s confirmation by at least a week and frustrated some Republicans, including Trump, who described the “elevator screamers”—without evidence—as paid protesters.

The very rude elevator screamers are paid professionals only looking to make Senators look bad. Don’t fall for it! Also, look at all of the professionally made identical signs. Paid for by Soros and others. These are not signs made in the basement from love! #Troublemakers

Before Trump’s tweet, Grassley echoed similar language in an interview on Fox Business, during which he also claimed the protesters were funded by influential Democratic donor George Soros. “I have heard so many people believe that,” he said. “I tend to believe it.” Grassley’s colleague on the Judiciary Committee, Sen. Hatch, had his own run-in with protesters in the Senate Office Building on Thursday. After they approached him in an elevator, he waved them off and said, “When you grow up, I’ll be glad to” speak with you.

Maria Bartiromo asked Chuck Grassley this morning if he thinks George Soros is paying the elevator protesters. "I have heard so many people believe that. I tend to believe it," Grassley said. Trump tweeted the accusation about 80 minutes later pic.twitter.com/az8QtMZwma

Trump targets Ford on Twitter and mocks her at rally

Having once called Ford “very credible,” Trump quickly returned to form in the days after her testimony. From his Twitter account and at the lectern during a rally in Mississippi, the president launched an extended attack that left moderate Republican senators uneasy and enraged Ford’s supporters. As Mother Jones reported earlier this week:

Two senators whose votes Trump will need to elevate Kavanaugh to the Supreme Court—Flake and Sen. Susan Collins (R-Maine)—noted their displeasure with his diatribe. “It’s kind of appalling,” Flake said. Collins called the president’s comments “wholly inappropriate” and “unacceptable.”

Trump had previously questioned why Ford did not report her accusation several decades ago. That tweet, in addition to other attacks on Ford’s credibility, sparked the hashtag #WhyIDidntReport, where survivors of sexual abuse “highlight the difficulties, fear, anger and shame that so often surround sexual harassment and assault,” the New York Times reported.

I have no doubt that, if the attack on Dr. Ford was as bad as she says, charges would have been immediately filed with local Law Enforcement Authorities by either her or her loving parents. I ask that she bring those filings forward so that we can learn date, time, and place!

One of the more curious moments of Ford’s testimony was when Rachel Mitchell, the Arizona prosecutor enlisted by the Republican Judiciary Committee members to question her, honed in on Ford’s flying habits. Ford had previously told friends that a lifelong fear of flying stemmed from the aftereffects of her assault. As Mitchell attempted to probe this claim, the president’s son opined on Twitter:

I’m no psychology professor but it does seem weird to me that someone could have a selective fear of flying.

Can’t do it to testify but for vacation, well it’s not a problem at all.

It was not the first time Trump Jr. has chimed in on sexual assault in with stunning insensitivity. A week prior to Ford’s testimony, Trump Jr. posted a picture to his Instagram account that made light of the allegations against Kavanaugh by comparing them to a letter a child would write to an elementary school crush. “Hi Cindy, will you be my girlfriend,” the letter read. “Oh boy…the Dems and their usual nonsense games really have him on the ropes now,” Trump Jr. added.