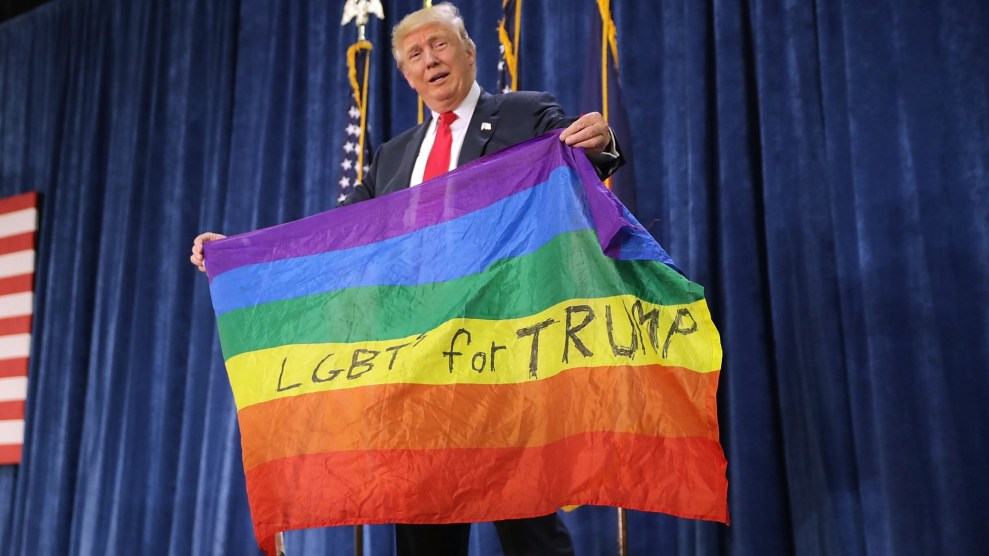 Donald Trump holds up a pride flag given to him by a supporter at an October 2016 campaign rally.Chip Somodevilla/Getty

When President Donald Trump spoke to the United Nations last month, he boasted about his administration’s efforts to push for the decriminalization of homosexuality in the dozens of countries where it remains illegal. “As we defend American values, we affirm the right of all people to live in dignity,” Trump said. “For this reason, my administration is working with other nations to stop criminalizing of homosexuality, and we stand in solidarity with LGBTQ people who live in countries that punish, jail, or execute individuals based upon sexual orientation.”

The Trump team appears to have done far less on the issue than the previous administration.

The initiative, which was rolled out to great fanfare earlier this year, is being run by US ambassador to Germany Richard Grenell. It has become a favorite talking point of younger Trump supporters as they seek to defend a president who has rolled back transgender rights and nominated anti-LGBT judges. Both Trump and his eldest son, Don Jr., have tweeted about it enthusiastically.

There’s just one problem: Activists and other sources deeply involved in the decriminalization movement tell Mother Jones that for all the tweets and publicity, the administration has done virtually nothing that is likely to produce tangible results. While Grenell, who is gay, has convened a handful of panel discussions with activists in Europe, the Trump team appears to have done far less on the issue than the previous administration.

“There’s nothing,” says David Pressman, a partner at the Boies Schiller Flexner law firm who worked on international LGBTQ policy under Obama. Grenell’s events, he says, have “not translated into any meaningful, coordinated, strategic effort.”

Problems with the initiative emerged early on. When NBC first broke news of its launch, Trump appeared not to know it existed. At some point, he did get the message and seemed to recognize the value of publicizing it. To commemorate the start of Pride Month, Trump tweeted about the “global campaign to decriminalize homosexuality.” Two months later, the Log Cabin Republicans, a pro-LGBT group, cited it approvingly in their endorsement of Trump’s reelection campaign. (The group had declined to endorse him in 2016.) Then in September, it appeared in his UN speech.

“President Trump really fancies himself an LGBT ally,” says Ryan Thoreson, a Yale Law School lecturer and researcher with Human Rights Watch. “He thinks that he’s really good for LGBT rights and seems disconnected from the reality that his administration has consistently attacked LGBT people domestically, and hasn’t offered anything more than rhetoric for LGBT people abroad.”

In February, US officials told NBC that Grenell’s initiative would likely “include working with global organizations like the United Nations, the European Union and the Organization for Security and Cooperation in Europe, as well as other countries whose laws already allow for gay rights.” The State Department’s Bureau of Democracy, Human Rights and Labor (DRL) was expected to play an organizing role, given its focus on international LGBTQ rights during the Obama administration. But two sources close to that office told Mother Jones that it has been frequently left out of the loop in the months since the campaign was launched. “No one in DRL has any idea what’s going on,” a former State Department official said. “There is no process.”

Even if DRL had attempted to play a prominent role in the effort, it would have had fewer resources and heft to contribute. Last year, the White House tried to gut the bureau’s budget by nearly 25 percent—Congress approved a smaller cut closer to 20 percent—and, like the rest of the State Department, it’s still recovering from the hiring freeze instituted by Trump’s first secretary of State, Rex Tillerson.

“No one in DRL has any idea what’s going on…There is no process.”

In addition to DRL, any coordinated push toward decriminalization would involve designated point people elsewhere within the State Department, officials at other federal agencies, and input from National Security Council staff at the White House. But it’s unclear whether any of that is actually happening. “All we’ve seen is two meetings without a lot of follow-up in Berlin, and one kind of similar meeting in Kiev,” said Mark Bromley, chair of the Council for Global Equality, which advocates for American foreign policy to prop up LGBTQ rights across the globe. “Perhaps they will put more diplomatic and financial muscle behind it, but we certainly haven’t seen an integrated decriminalization program.”

Trump’s State Department has participated in the Equal Rights Coalition, a multilateral body that promotes LGBTQ equality, and has signed the group’s statements objecting to crackdowns on minorities in Brunei and Chechnya. But the administration has been noticeably silent about similar crackdowns by close allies, such as Saudi Arabia, Qatar, and Kenya.

The State Department declined to comment for this story. The US embassy in Berlin did not respond to a request for comment.

Without a coherent strategy, the US effort has missed crucial opportunities to support activists fighting for decriminalization in their home countries. Njeri Gateru, director of the National Gay & Lesbian Human Rights Commission in Nairobi, said that American diplomats never reached out in the run-up to the Kenyan High Court’s ruling in May on whether to overturn a colonial-era law against gay sex. “Not to me. Not to anyone who I know,” she said. The law was ultimately upheld.

The approach was far different during the Obama years, when officials kept in close touch with activists like Gateru to ensure statements by then-Secretary of State Hillary Clinton and other leaders accurately reflected what was happening on the ground. This preparation preceded the administration’s release of memorandum in 2011 that directed diplomatic personnel to “promote and protect” LGBTQ rights abroad. “The conversation did more to build than to destroy,” Gateru says. “We felt like we were part of the conversation and part of the consultation.” In July 2015, Obama directly criticized the Kenyan government’s oppression of LGBTQ people while standing next to Kenyan President Uhuru Kenyatta during a joint press conference, equating it to state-sponsored racism in the United States. The Kenyan leader responded by brushing aside gay rights as a “non-issue” in his country.

Pressman, who represented the United States on the UN Security Council under Obama, said that while developing Obama’s memorandum, “we weren’t doing public events and tweeting about it. We were doing the hard work of figuring out how you actually get this thing done.” The process involved buy-in from senior leaders like Clinton, who later inaugurated the policy with a speech in Geneva, where she declared, “Gay rights are human rights, and human rights are gay rights.”

That support does not appear to be forthcoming from Secretary of State Mike Pompeo, who opposes gay marriage and once suggested that gay sex was a “perversion.” Under his leadership, the State Department has declined requests from several embassies to fly rainbow flags during Pride Month and has created a “Commission on Unalienable Rights” to refocus discussion of human rights toward “our nation’s founding principles of natural law and natural rights.” More than two dozen LGBTQ advocacy organizations blasted Pompeo in an open letter for this, writing in June that Pompeo’s natural law formulation “is used by a variety of organizations as code words for denying human and civil rights to LGBTI citizens.” When the commission was announced in July, critics “wondered whether the volunteer panel will undermine [DRL], which for more than four decades has been responsible for holding abusive governments to account,” the Washington Post reported.

While NBC, citing American officials, reported in February that Pompeo “is supporting the work by US embassies and consulates to fight violence and discrimination against LGBT people,” sources with knowledge of the situation have described a more fraught dynamic. “There does seem to be some power play going on between Ric Grenell—and his political connections—and Secretary Pompeo in Washington,” one source who speaks regularly to DRL officials told Mother Jones. The newly-confirmed DRL head, former Catholic University law professor Robert Destro, appears to be aligned with Pompeo here. He has argued that people in same-sex marriages are not protected under sex discrimination laws and has described marriage between a man and woman as “the very institution on which the entire natural, legal and social order depends.”

Pompeo has thrown his weight behind other State Department initiatives, such as an annual religious freedom summit, that more closely align with his evangelical Christian values. At the UN, Trump announced $25 million in funding to promote religious tolerance and the protection of relics and religious sites. He also tapped an ambassador-at-large for religious freedom, Sam Brownback, who as governor of Kansas rescinded protections for LGBTQ workers.

But the administration has been less eager to staff the department with people whose job it is to protect LGBTQ rights. In 2015, Obama appointed the first-ever special envoy charged with promoting the human rights of gender and sexual minorities. Trump initially kept on the Obama-era official, Randy Berry, and Tillerson vowed to preserve the position. But amid backlash from conservative Christian groups, Berry was switched to a different role and was later named ambassador to Nepal. He was not replaced.