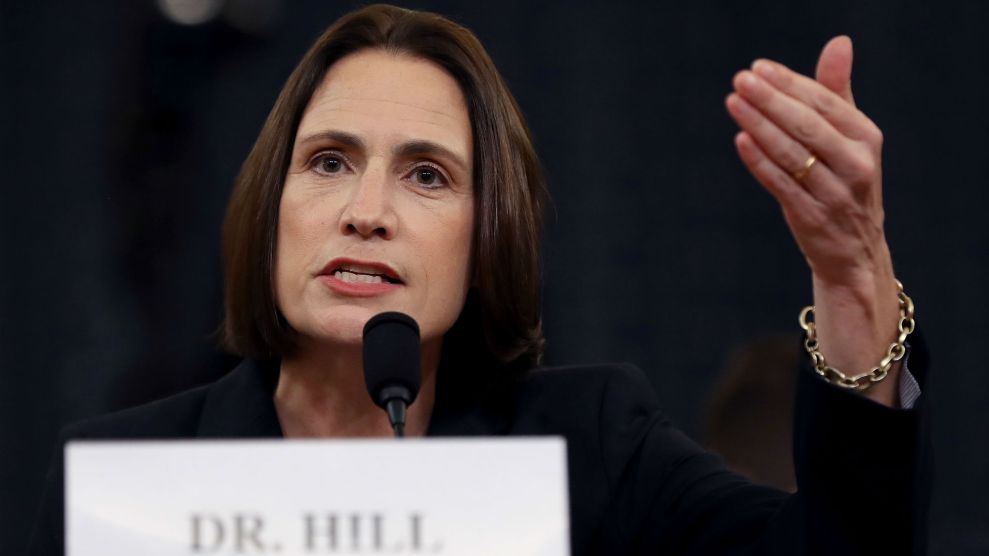 Fiona Hill, the National Security Council’s former top Russia expert, admitted on Thursday afternoon that she had been unfair to Gordon Sondland, the ambassador to the European Union who pushed Ukraine to open investigations that would be harmful to his President Donald Trump’s opponents. But in explaining how, Hill offered a withering depiction of Sondland and a damning take on Trump’s approach to Ukraine.

“What I was angry with is that he wasn’t coordinating with us,” Hill said after a question from Republican lawyer Stephen Castor, describing a testy encounter she had with Sondland last summer. She then explained that she has since realized that Sondland—who was briefing Trump, White House Chief of Staff Mick Mulvaney and Secretary of State Mike Pompeo on his efforts—“wasn’t coordinating with” the National Security Counsel “because we weren’t doing the same thing,” she said.

WATCH: Fiona Hill says Sondland wasn't coordinating with her and her staff:

"He was being involved in a domestic political errand, and we were being involved in national security foreign policy."
…
"I did say to him, 'I think this is all going to blow up' — and here we are." pic.twitter.com/2nkAS362He

To be clear, this is not a kind description of Sondland or the president’s actions. And it is striking that Hill’s testimony came in response to questions from Republicans attempting to drive lines of inquiry helpful to Trump. But the British-born Hill effectively took control, elaborating without interruption on subjects damaging to the president.

Hill said, quite clearly, that Sondland, at Trump’s behest, had sidestepped official, purposefully nonpartisan US foreign policy organs so that he could more effectively try to hijack US policy toward Ukraine to help Trump pursue domestic political aims.

During the impeachment hearings, Republicans have tried to argue that Trump’s to request that Ukraine announce investigations damaging to his political opponents reflected legitimate policy concern or Trump’s general dislike of corruption abroad. But Rep. Devin Nunes, (R-Calif.) the top Republican on the Intelligence Committee, accidentally helped Hill demolish his own party’s talking point by pressing her further on her concerns about Sondland’s activity, trying to establish that he was duly acting under the president’s authority.

“At the end of the day, isn’t it the commander and chief that makes those decisions?” Nunes asked.

“My point, Mr. Nunes, is that we are the National Security Council were not told by the president, directly or through Ambassador Bolton, that we were to be focused on these issues as a matter of U.S. policy toward Ukraine,” Hill explained. In fact, she said, “I was given a directive to clearly state that I should stay out of politics.”