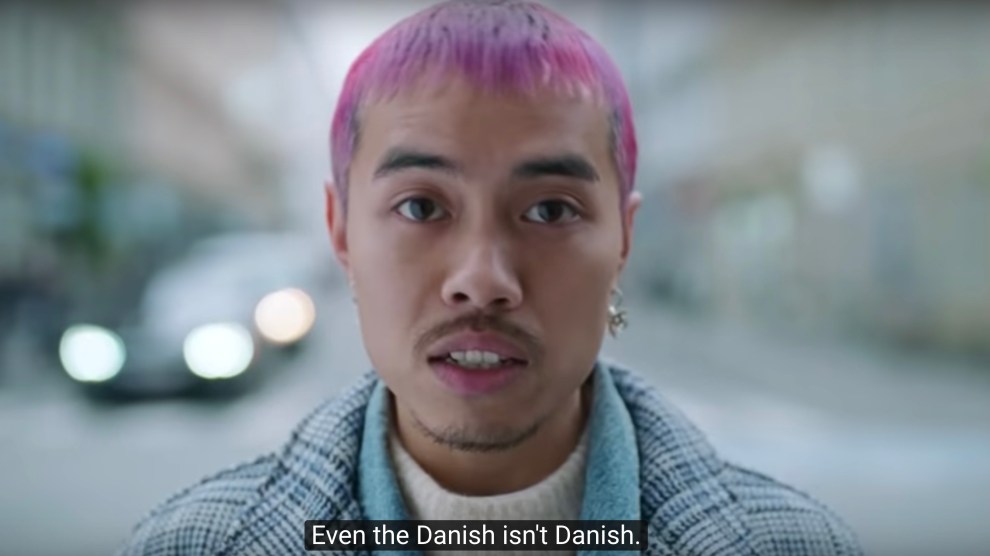 Much of the online harassment directed at a major European airline in recent days appears to have come from users of a controversial 4chan message board, according to a review by Mother Jones.

Earlier this week, the Sweden-based Scandinavian Airlines released a commercial as part of its “What is truly Scandinavian?” marketing campaign. According to the airline, also referred to as SAS, “absolutely nothing” is “truly Scandinavian.” The ad explains: “Our democracy? Credit goes to Greece. Parental leave? Thank you, Switzerland. The iconic Scandinavian windmills were actually invented in Persia…What about licorice? It’s Chinese.” The point, the ad explains, is that “in a way, Scandinavia was brought here, piece-by-piece,” by people who traveled abroad. “We can’t wait to see what wonderful things you’ll bring home next,” it concludes.

The response has been ferocious. The airline’s social media channels have been bombarded with thousands of angry comments from people who disagree with the ad’s message. SAS told the Norwegian newspaper Dagbladet that it believed the outcry was the result of a “coordinated attack on the campaign.”

SAS’ suspicions appear to be correct. While the backlash likely has multiple points of origin, the ad campaign has particularly incensed 4chan’s Pol message board, the politics-focused portion of the website that’s a known hub for fringe alt-righters and white nationalists. The commercial directly contradicts bigoted notions of white, European, and Nordic supremacy, which are core beliefs of the internet far-right. In response, Pol users have launched a coordinated campaign targeting the airline and the ad agency that made the video.

As is often the case on the Pol board, the rage is unequivocally racist. While 4chan is small compared to some other social media platforms, the site still brings in 27 million monthly users, according to its own metrics. And compared to other 4chan eruptions, the scope of the anti-SAS campaign is massive. Pol users have created more than a dozen independent threads to gripe about the ad, and many are highly active.

Users in almost every thread viewed by Mother Jones posted links to the YouTube video of the ad and encouraged others to “be sure to let them know how you feel in the comments” and to “hit that dislike button.” SAS disabled comments at some point after posting the video. However, the “like” and “dislike” buttons are still available, with dislikes massively outpacing likes, 62,000 to 4,500. Pol users also suggested that trolls direct their rage at other, related targets. “Community comment section still open,” one user wrote in response to a post about the commercial being temporarily removed from YouTube.

“F–gots turned comments off,” another poster wrote. “Pretty soon they’ll turn the like/dislike off too. But luckily, this ad is mirrored elsewhere where comments AREN’T turned off.”

“We should troll the ad agency,” another 4channer suggested, linking to the website of &Co., the Copenhagen-based firm that SAS worked with.

Others did troll the agency. According to 4chan posters, &Co. pulled the reviews section off of its YouTube page. 4channers even posted a list of the agency’s staff. Mother Jones found roughly a dozen instances in which the list was posted on anti-SAS threads.

“I’m glad my kidney failure is going to kill me soon. I feel bad for the people that are going to live long lives and have to deal with this shit,” one 4channer wrote, to which another responded, “If you are going to die, why not immortalize your name? Lol.”

Another asked, “Any Scandi up for a minecraft exploration?”—fringe-internet slang that’s a “way to talk about real-world threats without saying that you’re going to commit a crime,” according to Ben Decker, an internet researcher who runs the media and tech investigations consultancy Memetica.

A few 4chan users appeared to explicitly call for violence.

“i’d recommend all nordics to just pull a fucking brevic,” one poster wrote, referencing the far-right Norweigan terrorist Anders Breivik, who murdered 77 people in the country in 2011.

“They deserve the Megumin Ryder truck,” another wrote, likely referencing a 2018 Toronto attack in which a man drove a truck into pedestrians, killing 10. The driver claimed that his attack was inspired by incel culture, a toxic and often misogynistic internet community of “involuntary celibate” men.

The ad agency declined to comment, and SAS has not yet responded to a request for comment.

The outrage at SAS is reminiscent of 2014’s Gamergate, a coordinated harassment campaign that started on 4chan and other platforms. In that case, online trolls targeted women in the video game industry in a backlash against efforts to make games, and the industry as a whole, more inclusive toward minorities and women.