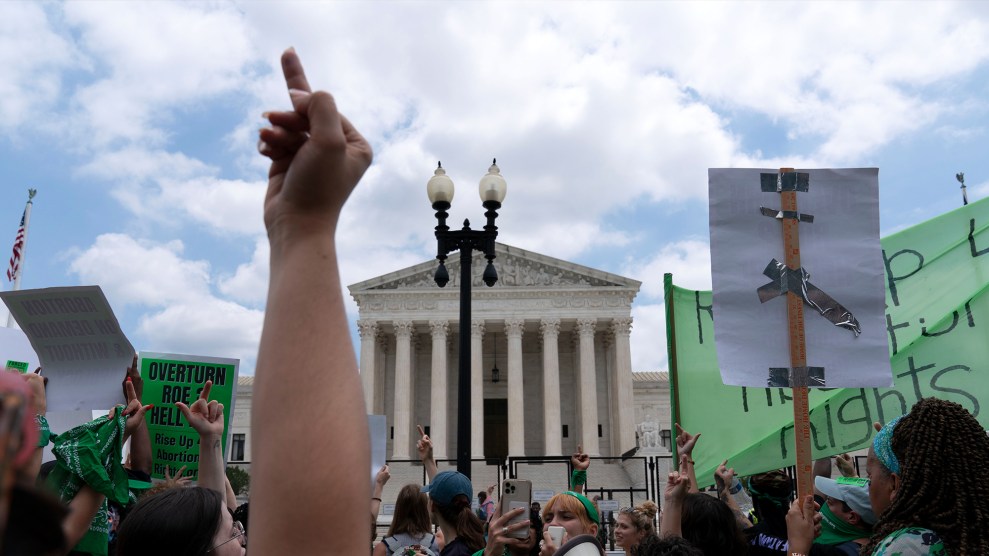 For a certain type of individual, the Supreme Court’s decision to erase the constitutional right to an abortion—reversing decades of precedent, and hurling catastrophe at untold millions—presents a unique opportunity.

See, for this brilliant mind, the end of Roe could encourage conservative states to install social programs, such as paid family leave and affordable daycare to help caretakers of all stripes, now that the long-awaited goal of destroying the law has finally been secured. Let’s take a look at how Ross Douthat, an opinion columnist at the New York Times, views this moment:

There are other possible futures. The pro-life impulse could control and improve conservative governance rather than being undermined by it, making the G.O.P. more serious about family policy and public health. Well-governed conservative states like Utah could model new approaches to family policy; states in the Deep South could be prodded into more generous policy by pro-life activists; big red states like Texas could remain magnets for internal migration even with restrictive abortion laws.

But Douthat’s thinking here, which misses the crucial point that abortion is health care, is willfully ignorant, if not delusional. In his fantasy, gutting Roe can be seen simply as a longstanding goal for Republicans, and now the party can begin embracing the benefits of helping caregivers, despite its fundamental allergy to social programs.

Here’s the truth: The GOP has never been serious about such matters—and that’s laid bare by the facts:

The court’s liberal justices noted exactly this in their dissent. In Mississippi, they pointed out, a staggering 62 percent of all pregnancies are unplanned. But the state doesn’t require insurance companies to cover birth control and expressly prohibits educators from teaching proper contraceptive use. It also rejected Medicaid funds despite 86 percent of pregnancy-related deaths stemming from post-partum complications.

But Douthat isn’t alone in this wistful image of the Republican party cracking out the knitting needles to stitch together a social safety net for women.

“The pro-life movement, in general, has not been thinking big enough,” Nathan Berning, co-founder of the anti-abortion organization, Let Them Live, told The Atlantic. “It’s long past time for conservative pro-lifers to take a multipronged approach to this,” said anti-abortion columnist Charlie Camosy. “They’ve been virtually nowhere on policy.”

Perhaps they’re sincere in hoping their conservative allies will support strong social policies. But the glaring absence of such support isn’t by accident; it’s by intricate, carefully thought-out design. That’s because the fundamental goal of the conservative movement that killed off Roe has always been to eliminate the administrative state, not to expand it—and by doing so, create an unequal society. From my colleague, Pema Levy:

With this case, the court is poised to roll back what federal agencies can regulate, including threats as existential and enormous as climate risk. It’s a regular theme for this court, and this case was clearly so tempting to the conservatives that they took the case even when it should be, as the justices like to say, moot.

This attack on the administrative state may sound small. But it heralds an ominous shift. At its founding, the United States did not have much of an administrative state. Certainly no EPA, not even a Justice Department. Over the last 200 years, Congress has slowly created agencies with the power to function as a modern government overseeing a large and complex country. While bureaucracy is imperfect and frustrating, it funds the vaccines we need during pandemics, ensures our rights, protects our air and water, regulates industries, collects taxes—the list is long, all the way down to trying to save the continued habitability of the planet. A government with a weak and shrunken administrative state cannot protect you—not the air you breathe or your right not to face discrimination or your ability to vote.

Yet with each new opinion, narrowing those protections seems to be the goal. The six conservatives on the Supreme Court will go as far back as they have to—to the 13th century even—to peel away the rights and structures that underpin modern life.

The fear now is that far from expanding social protections, conservatives will go after them with more gusto, with efforts to target same-sex marriage, birth control, and so forth. Justice Clarence Thomas made that clear in his concurring opinion. And there’s a reason why neither he nor Samuel Alito mentioned anything about expanding social welfare. It’s time to stop hoping they ever will.