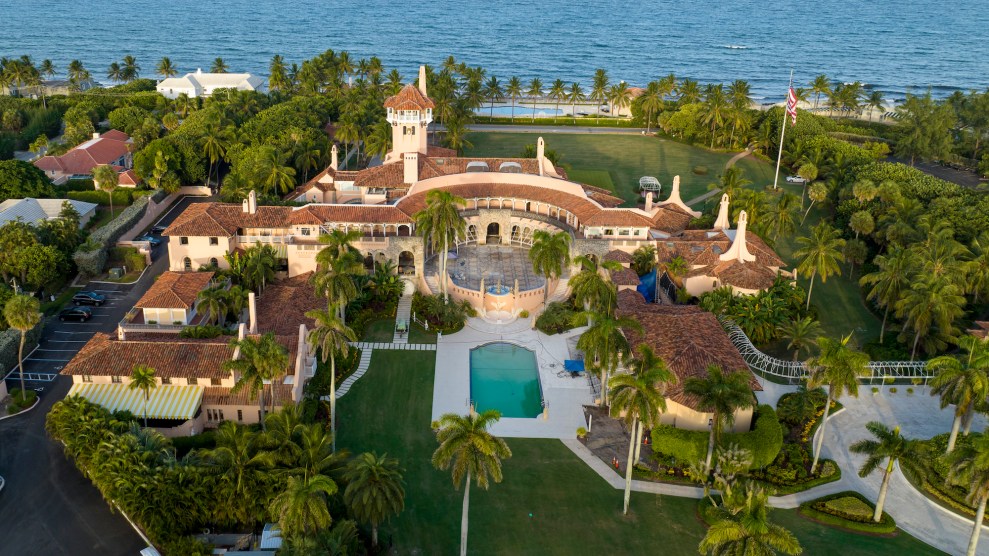 Donald Trump has offered a swirling array of excuses for why he took secret documents from the White House, stashed them around his Mar-a-Lago resort in Florida, and refused to return them to the US government—which precipitated a raid by a team of FBI agents. The most recent Trump World narrative is not that the documents weren’t secret or needed to be kept secure. Actually, his lawyers now say, Trump is very interested in securing sensitive government documents. The reasoning seems to be that a country club allowing thousands of people to wander the grounds for a fee, will keep the material—said to include information labeled with the highest level of restriction, including some documents related to our nuclear arsenal—more secure than the ultra-secure, fortified residence of the most powerful person in the world, surrounded by law enforcement and military defenses. Also known as the White House.

On Laura Ingraham’s FOX News show Thursday night, Trump’s attorney Christina Bobb, told Ingraham that safeguarding the documents was all Trump was ever interested in.

After all, documents were kept in a basement storage room that not many people had access to. Plus, only one key existed for the lock on the door, Bobb said. When Ingraham pressed her to clarify that only one or two people were able to access the room, Bobb demurred, settling on “a very small number of people.”

Similarly, Rudy Giuliani, who has sometimes been Trump’s attorney and who is known for having very bad operational security, took to NewsMax and pitched a similar line.

Rudy Giuliani tells Newsmax that Trump was just trying to preserve documents by putting them in a safe place. pic.twitter.com/tDJag4loW4

“Now they want to make him responsible for having taken classified documents and preserve them,” Giuliani said. “Really, if you look at the Espionage Act, it’s not really about taking the documents, it’s about destroying them or hiding them or giving them to the enemy, it’s not about taking them and putting them in a place that’s roughly as safe as they were in in the first place.”

“[The] Espionage Act, it’s not really about taking the documents…it’s not about taking them and putting them in a place that’s roughly as safe as they were in in the first place.”

While the White House, has had notable security breaches, a key distinction with Mar-a-Lago is that the White House isn’t actually a privately owned business that functions by letting anyone who is willing to pay a fee come visit. The Palm Beach resort is currently shut for the summer, but for most of the time since Trump left office, it has welcome thousands of people into the property for weddings, conferences, charity galas, car shows, and political fundraisers. The Secret Service does maintain a security cordon, but there is no serious vetting of every guest—there simply can’t be if Mar-a-Lago is to function as a resort and country club. To join the club and have regular daily access in-season to the facility, around 500 people have paid the initiation fee (now set at $200,000) and their annual dues, but they are not required to undergo a security background check similar to the ones required to view top-secret documents.

And Mar-a-Lago has had serious security breaches. A Chinese national was convicted in 2019 for trespassing after she was found wandering onto the property armed with surveillance equipment. She told authorities that she believed she had bought tickets to the event. And her story is not that improbable, after all, that same year, a Florida massage parlor entrepreneur named Cindy Yang admitted that she had a side business selling “access” to Mar-a-Lago, offering to bring tourists from China to the club for a fee.

As we wrote at the time:

Yang, who goes by Cindy, and her husband, Zubin Gong, started GY US Investments LLC in 2017. The company describes itself on its website, which is mostly in Chinese, as an “international business consulting firm that provides public relations services to assist businesses in America to establish and expand their brand image in the modern Chinese marketplace.” But the firm notes that its services also address clients looking to make high-level connections in the United States. On a page displaying a photo of Mar-a-Lago, Yang’s company says its “activities for clients” have included providing them “the opportunity to interact with the president, the [American] Minister of Commerce and other political figures.” The company boasts it has “arranged taking photos with the President” and suggests it can set up a “White House and Capitol Hill Dinner.”

Since Trump became president much of the appeal of Mar-a-Lago has been that it offers anyone who visits incomparable access to the highest levels of US government and an up-close look at the most secret inner workings of the presidency. The fact that Trump might wander through a wedding, interrupt your Easter breakfast, or maybe be seen conducting high-level negotiations about trade with a foreign dignitary, are all selling points. In Sept. 2017, photographs of Trump circulated, showing him sitting just feet away from paying dinner guests, in deep conversation with Japanese prime minister Shinzo Abe, as they were informed of a missile launch by North Korea. On the same visit, Mar-a-Lago guests took photos of Trump’s entourage, including the military aide who carries the secure “nuclear football” everywhere the US president goes.

More details on what reasons FBI officials had for conducting the raid to secure the documents may emerge over the next week as a federal judge ruled on Thursday that large parts of the supporting documents behind the subpoena that allowed the raid may be released to the public. Department of Justice officials have balked at releasing all the documents as its investigation continues.

Trump and his allies, meanwhile, have gone back and forth between demanding the FBI reveal more about their thinking before the raid and keeping suspiciously quiet. Trump attorney Bobb appeared in court on Thursday during the hearing on the release of the documents but said she was just there to watch, not participate. As much as Trump’s allies might want to put the Biden Department of Justice on the spot, given the FBI’s basic claim they raided the property because they had immediate concerns about the safety of the documents, more revelations on just how lax Mar-a-Lago’s security is, may be on the way.