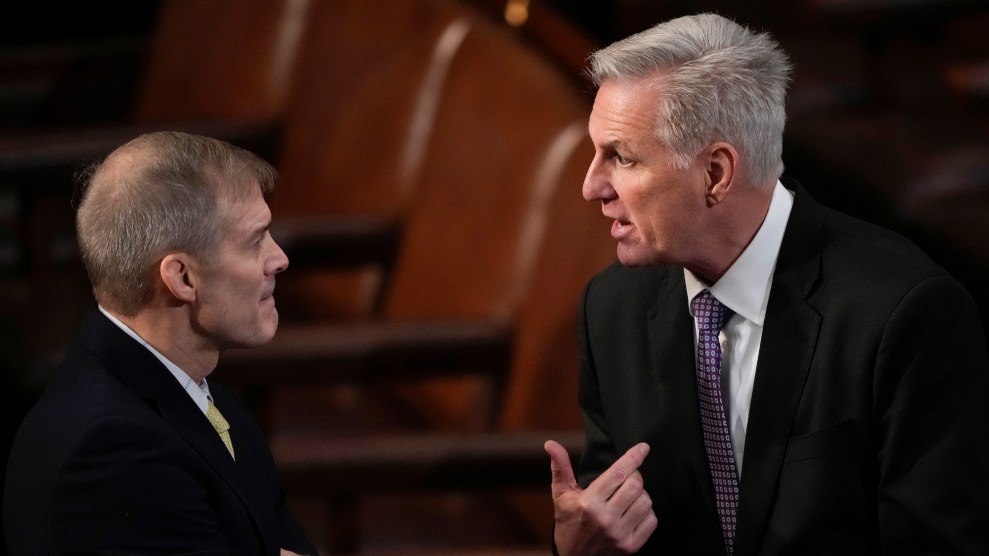 Rep. Jim Jordan, R-Ohio, talks with Rep. Kevin McCarthy, R-Calif., last week in the House chamber while McCarthy tried to convince Jordan and other hardliners to back him. Andrew Harnik/AP

Fueled by anger over the federal law enforcement investigation of former president Donald Trump’s alleged mishandling of confidential documents and the trials and subsequent imprisonment of some January 6 participants, Republicans plan to institute a new select committee to investigate the investigators. While probing the FBI’s role in the Mar-a-Lago raid last year was a staple of the GOP’s talking points all fall, the formation of an entire Congressional committee, and one that now appears will be particularly powerful, was part of House Speaker Kevin McCarthy’s desperate negotiations to secure his position.

Under the agreement McCarthy brokered with hardline conservatives, a new subcommittee will be formed under the control of prominent House Freedom Caucus member Rep. Jim Jordan (R-Ohio). A key difference between what emerged from McCarthy’s negotiations with hardliners and earlier calls for investigations into the FBI or the creation of a committee to investigate the “weaponization” of government agencies against conservatives, is that the new committee will have the power to look into ongoing criminal investigations. Moreover, it will have access to any information shared with the House Intelligence Committee, which receives the most secret levels of intelligence collected by intelligence services.

The reason that the Republicans want this much insight into ongoing investigations isn’t hard to deduce. As Politico noted:

The panel’s expected formation comes as the Justice Department continues to arrest and prosecute hundreds of rioters charged with breaching the Capitol on January 6, 2021, and amid two ongoing criminal investigations connected to former President Donald Trump. Those include the probe of his effort to overturn the 2020 election and his decision to warehouse highly sensitive national security documents at his Mar-a-Lago estate after leaving office.

A big part of the negotiations between McCarthy and the hardliners apparently focused on exactly how much power the new committee would be given. And, according to Rep. Chip Roy (R-Tex.), the answer is a lot. At least as much as enjoyed by the House January 6 committee, which dominated headlines for much of last summer with its hearings revealing the level of involvement Trump had in the attack on the US Capitol.

“So we got more resources, more specificity, more power to go after this recalcitrant Biden administration,” Roy said in an interview on Friday, framing the committee’s work as overtly political.

Despite this point of reference, House Republicans keep referring to the committee as a new version of the famed Church Committee, which was led by Idaho Democratic senator Frank Church but was almost equally stocked with Republican lawmakers. The Church Committee was established in 1975 after the Watergate scandals in order to investigate the concerns that US intelligence agencies were spying on American citizens. It revealed some of most notorious abuses by the FBI and CIA—including the COINTELPRO program that infiltrated civil rights groups and a lengthy list of assassination plots against foreign leaders carried out by the US government. The result of their work led to new prohibitions on how intelligence agencies can operate.

Appearing on ABC’s This Week, Rep. Scott Perry (R-Pa.), chairman of the House Freedom Caucus, who the January 6 Committee investigated for his role in the attack on the Capitol two years ago, refused to recuse himself from possibly sitting on the new committee—despite the fact that it seems likely to probe the Jan. 6 investigation.

“Should everybody in Congress that disagrees with somebody be barred from doing the oversight and investigative powers that Congress has?” Perry said. “I get accused of all kinds of things every single day, as does every member that serves in the public eye.”